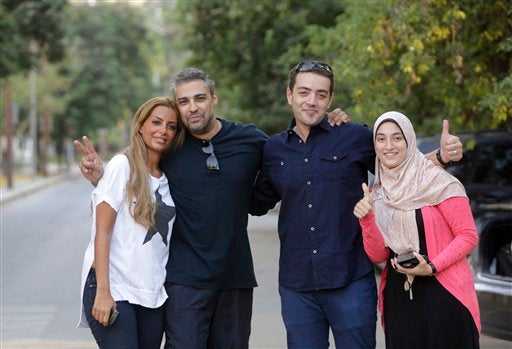 Canadian Al-Jazeera English journalist Mohamed Fahmy second left, and his Egyptian colleague Baher Mohammed, celebrate with their wives after being released from Torah prison in Cairo, Egypt, Wednesday, Sept. 23, 2015. Fahmy and his colleague Baher, were among a group of 100 people pardoned by Egyptian President Abdel-Fattah el-Sissi on the eve of the major Muslim holiday of Eid al-Adha. The pardon also comes a day before the Egyptian leader is to travel to New York to attend the United Nations General Assembly. AP PHOTO

The move to free Canadian journalist Mohamed Fahmy and Egyptian national Baher Mohammed came days before el-Sissi’s appearance at the U.N. General Assembly, as well as on the eve of a major holiday in Islam, Eid al-Adha.

Also receiving presidential pardons were 100 people, including dozens of human rights activists. Most of them were convicted and imprisoned for breaking a disputed law enacted in 2013 that prohibits unapproved demonstrations. The measure has almost entirely ended street activism in Egypt.

Fahmy and Mohammed were arrested in December 2013 and sentenced to three years in prison in a retrial last month for airing what a court described as “false news” and coverage biased in favor of the Muslim Brotherhood. Since the 2013 military overthrow of former President Mohammed Morsi, hundreds of his supporters have been killed in clashes with security forces and thousands were detained, including almost the entire leadership of his group, the now-outlawed Muslim Brotherhood.

The two journalists were released hours after the pardon was announced, and dropped off by police in a Cairo suburb.

“We have not digested the fact that we are free, we don’t have to worry about anything else,” said Fahmy, who joined Al-Jazeera just months before his arrest. “Our families have suffered so much since the beginning of this trial, and we’re very happy that el-Sissi took this action and released us.”

Fahmy’s lawyer, Amal Clooney, said she was “delighted” by the pardon.

“This is a historic day in Egypt where the government has finally corrected a longstanding injustice,” she said in a statement.

Al-Jazeera also said it was happy for its employees.

“It is hard to celebrate, though, as this whole episode should not have happened in the first place,” the broadcaster said in a statement.

The long-running trial of the Al-Jazeera staff was entangled from the start with the wider political enmity between Egypt and the super-rich Gulf state of Qatar, where the broadcaster is based, following Morsi’s ouster. Egypt maintains that Qatar is fueling unrest in Egypt through its support to Islamists, including the Brotherhood.

Egypt’s official MENA news agency said a third person from the Al-Jazeera case — which included other defendants along with Australian journalist Peter Greste — was also pardoned but was not identified by name.

Greste said his conviction still stood and there was ambiguity around whether it would remain.

“It does still stand. It’s a relatively minor thing compared to what we really wanted to do and that’s to make sure that Fahmy and Baher were freed and that their ordeal, at least after almost two years of constant struggle and suffering, is really genuinely over,” Greste told Australian Broadcasting Corp. on Thursday in Canberra, Australia.

Greste’s reaction to word of his colleagues’ freedom was captured on camera, as he was filming a game show for the ABC when the news broke. His jaw dropped when the show’s host handed him a phone, from which he read that Fahmy had been pardoned. Clearly overwhelmed, he struggled to speak.

“I’m sorry, I’m feeling really emotional,” he said. “I mean, we’ve been fighting for the past eight months for this, and I mean … Christ, I’m sorry.” At that, he grinned and raised his arms in victory.

Fahmy, Greste and Mohammed were charged with being part of the Muslim Brotherhood, which authorities have declared a terrorist organization, and airing falsified video intended to damage national security.

They initially were convicted June 23, 2014, with Greste and Fahmy sentenced to seven years in prison and Mohammed to 10 years for also being found with a spent bullet casing. That ruling was later overturned on appeal, and a retrial ended with last month’s convictions.

Greste was deported earlier this year.

As defense minister, el-Sissi led the ouster of Morsi, Egypt’s first freely elected president. The government has since come under relentless criticism at home and abroad over its human rights record.

The criticism coincided with a wave of nationalism and xenophobia, a growing personality cult around el-Sissi, and a burgeoning insurgency led by a local affiliate of the extremist Islamic State group.

But the popular el-Sissi has weathered the outcry, forging closer relations with European powers and restoring close military and economic ties with the U.S. after a period of tension, all while injecting life into Egypt’s moribund economy after years of turmoil.

He also has projected an image of a stronger Egypt in a turbulent Middle East, ordering airstrikes against militants in Libya, taking part in a Saudi-led, U.S.-backed coalition fighting Shiite rebels in Yemen, and initiating moves to create a pan-Arab military force to deal with militants in the region.

A statement from his office said the pardons covered individuals “who have received final prison verdicts in cases related to breaking a protest law or infringing on the police forces’ actions, in addition to a number of health-related and humanitarian cases.”

“Now, he also has a better story to tell when he goes to New York; that he is addressing questions of international concern,” Hanna said.

But while the actions probably will win el-Sissi some leeway while in New York, they have not mollified rights activists at home.

“The (protest) law is still in force, it is not canceled,” she said.

“I’m happy for those who were released … but it’s an example of someone stealing large sums of money from me and then giving me back just a part of it,” Eid said.

The Committee to Protect Journalists said it welcomed the pardons, “but this is just a first step. Egypt can begin tackling its shameful record of press freedom by releasing all journalists imprisoned for their work in the country.”

“They may not be behind bars, but their families and careers have been affected immeasurably,” the statement said, urging Egypt to quash their cases.

Fahmy gave up his Egyptian citizenship during the trial in hopes of being deported to Canada. But in an open letter to el-Sissi published Wednesday in a Cairo daily, he appealed for the restoration of his citizenship, saying he relinquished it under duress.

A spokeswoman for Canada’s foreign affairs department, Rachna Mishra, said Canada is “pleased” with the pardon and will help facilitate Fahmy’s departure from Egypt.

Also among those pardoned were activists Sanaa Seif and Yara Sallam, the MENA news agency reported, and a relative said in a tweet that both were later freed. They were sentenced in 2014, along with 21 others, to three years in prison for a peaceful protest of the law near el-Sissi’s palace. Their sentences were reduced to two years in December.

Seif is from one of Egypt’s best-known activist families. Her brother, Alaa Abdel-Fattah, is serving five years in prison, also over an unauthorized but peaceful protest. Sallam is a prominent activist for women’s rights.