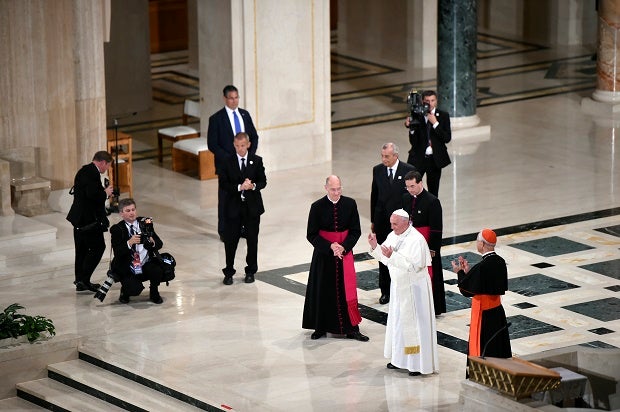 Pope Francis greets attendees at the Basilica of the National Shrine of the Immaculate Conception on Wednesday, Sept. 23, 2015, in Washington, before an outdoor Mass to canonize Junipero Serra. AP

WASHINGTON — An 18th-century missionary who brought Catholicism to the American West Coast was elevated to sainthood Wednesday by Pope Francis in the first canonization on US soil.

Francis canonized Junipero Serra during a Mass outside the Basilica of the National Shrine of the Immaculate Conception, the largest Catholic church in North America.

Serra was a Franciscan friar who marched north from Baja California with conquistadors from his native Spain, establishing nine of the 21 missions in what is now California. The pope announced in January that Serra would be canonized.

The decision was polarizing. Serra is revered by Catholics for his missionary work, but many Native Americans in California say he enslaved converts and contributed to the spread of disease that wiped out indigenous populations.

In his homily, Francis defended Serra, characterizing him as a kind and open-hearted man who protected Native Americans from colonizers.

“He was excited about blazing trails, going forth to meet many people, learning and valuing their particular customs and ways of life,” Francis said. “Junipero sought to defend the dignity of the native community, to protect it from those who had mistreated and abused it. Mistreatment and wrongs which today still trouble us, especially because of the hurt which they cause in the lives of many people.”

During a visit to South America in July, Francis offered a broad apology for the sins, offenses and crimes committed by the church against indigenous peoples.

Many Latinos in the US view the canonization of a Spanish-speaking missionary as a badly needed acknowledgment of the Hispanic history of the American church, and as an affirmation of Latinos as a core part of the US Catholic future. Latinos make up about 38 percent of US Catholics, but are well above the majority in several dioceses. The Archdiocese of Los Angeles, the largest US diocese, is about 70 percent Latino.

The pope’s apology did little to quiet those who oppose the canonization. Serra’s critics say he was carrying out a Vatican policy by treating indigenous people as inferior.

Francis spoke in his native Spanish, and Latino Catholics from California were among the 25,000 people who got tickets to the outdoor Mass. Vice President Joe Biden also sat in the congregation. Before the Mass, the pope entered the basilica to raucous cheers and applause from more than 2,000 men and women studying to become priests and nuns.

Joe Moyhanan, 28, of Portsmouth, New Hampshire, who is studying for the priesthood at St. John’s Seminary in Boston, said bearing witness to the first canonization on US soil was inspiring and showed what could be accomplished during a life devoted to Christ.

“God wants all of us to be saints,” Moyhanan said. “It’s attainable.”

Hundreds of faithful gathered at the historic mission in Carmel-by-the-Sea, California, where Serra is buried, to watch the Mass on a giant TV screen and pray. At the same time, about a dozen Native Americans gathered in a small, aging mission cemetery inside the grounds to worship their ancestors in a silent protest of the canonization.

Louise Miranda Ramirez, Tribal Chairwoman from the Esselen Nation, said her ancestors were abused by the Franciscan missionaries and trapped in the mission system.

Pope Francis to canonize 18th-century missionary at US mass