Pope Francis to canonize 18th-century missionary at US mass 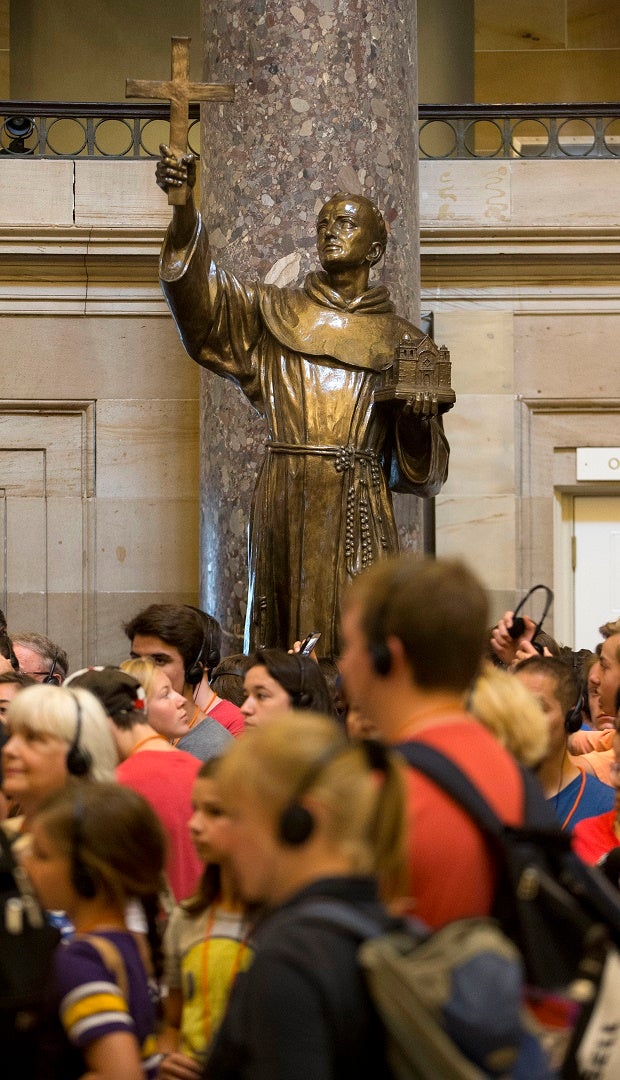 In this July 2, 2015, file photo, Capitol Hill visitors walk in front of a statue of missionary Junipero Serra, center, located in Statuary Hall, also known as the Old Hall of the House, on Capitol Hill in Washington. The first pope from the Americas is preparing to elevate to sainthood an 18th-Century missionary who brought Catholicism to California. Pope Francis will canonize Junipero Serra during a Mass on Sept. 23 outside the Basilica of the National Shrine of the Immaculate Conception in Washington. AP FILE PHOTO

WASHINGTON — The first pope from the Americas is preparing to elevate to sainthood an 18th-century missionary who brought Catholicism to California.

Pope Francis will canonize Junipero Serra during a Mass on Wednesday outside the Basilica of the National Shrine of the Immaculate Conception in Washington, the first-ever canonization on US soil.

The pope announced in January that Serra would become a saint. The Franciscan friar from Spain is revered by Roman Catholics for his missionary work, and Francis fast-tracked his canonization by eliminating the need to show proof of two miracles. Serra was beatified in 1988.

The canonization is controversial, especially in California, where Native Americans say he wiped out indigenous populations, enslaved converts and contributed to the spread of disease.

Francis will celebrate the Mass in Spanish in front of a congregation of 25,000, including some Hispanics from California. Washington’s archbishop, Cardinal Donald Wuerl, said the Mass will give Francis, a native of Argentina, an opportunity to highlight the contributions of Hispanics to the nation and the church.

Serra introduced Christianity to much of California as he marched north with Spanish conquistadors, establishing eight of the state’s 21 missions. The Vatican has defended his record, saying it shows he worked in defense of Native Americans.

During a visit to South America in July, Francis apologized for the sins, offenses and crimes committed by the church against indigenous peoples. He did not mention Serra.

“Serra’s canonization provides an opportunity to reflect on those sins, and resolve not to repeat them,” said Kathleen Sprows Cummings, director of the University of Notre Dame’s Cushwa Center for the Study of American Catholicism.

But the pope’s apology did little to quiet those who oppose the canonization.

“We believe that this canonization is going to backfire,” Valentin Lopez, chairman of the Amah Mutsun Tribal Band, said Tuesday. “This has woken up the outrage of indigenous people around the world.”

In California, at the historic Carmel mission where Serra died, up to 400 faithful are expected to watch the Mass on a giant screen in the courtyard.

The mission, founded in 1771, is also preparing for a silent protest by members of the Ohlone Costanoan Esselen Nation, who plan to pray for ancestors who are buried in the mission’s cemetery.