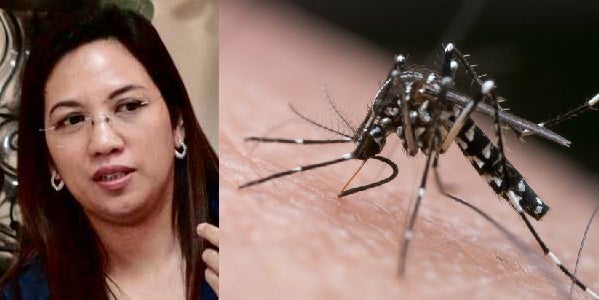 Health Secretary Janette Garin appealed to the public on Wednesday to takes steps to prevent the spread of dengue as she noted a rise in cases in Cavite, Central Luzon and Central Visayas.

Garin said intermittent rain coupled with improperly stored empty cans and car tires were resulting in the spread of the disease.

The secretary noted the critical hours when the dengue mosquito (Aedes aegypti) strikes.

“Yung lamok na may dala ng dengue kumakagat two hours after sunrise at two hours before sunset,” Garin said, airing special precaution for children who could be in school during these times.

Cavite officials have declared a state of emergency due to the high number of dengue cases the province, which has recorded 3,904 cases with 16 deaths from January to the first week of September.

But Garin said the high dengue incidence was not limited to Cavite.

She disclosed that the health department was also verifying the reported spike of the disease in certain areas in Mindanao. CB