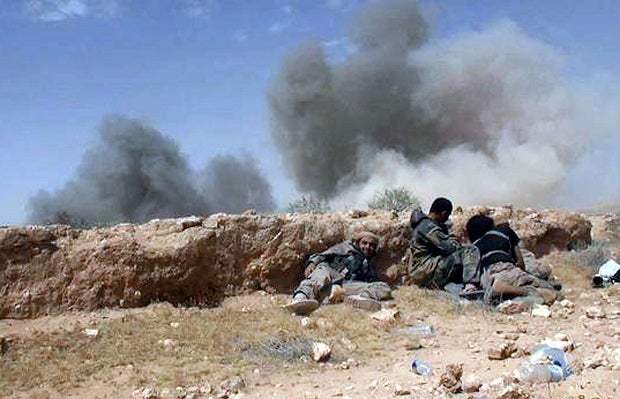 In this picture released on Wednesday, May 20, 2015 by the website of Islamic State militants, Islamic State of Iraq and Syria fighters take cover during a battle against Syrian government forces on a road between Homs and Palmyra, Syria. Islamic State of Iraq and Syria militants overran the famed archaeological site at Palmyra early on Thursday, just hours after seizing the central Syrian town, activists and officials said, raising concerns the extremists might destroy some of the priceless ruins as they have done in neighboring Iraq. AP

WASHINGTON, United States—Coalition forces killed a senior leader of the Islamic State of Iraq and Syria (ISIS) group in an air strike in Iraq, the Pentagon said Tuesday, also confirming the death in Syria of a French jihadist.

Abu Bakr al-Turkmani, who died September 10 in a strike in Tal Afar in northern Iraq, was a “slave facilitator” who had been involved in the sexual trafficking of Yazidi minority women, a US defense official separately told AFP.

“He was an ISIL (another term for ISIS) administrative emir, he was part of Al-Qaeda in Iraq before joining ISIL and was a close associate to multiple ISIL senior leaders in Iraq,” Pentagon press secretary Peter Cook told reporters, using an alternative acronym for the Islamic State group.

The Yazidis, a religious minority which lives mainly in Iraq’s Sinjar region, are neither Muslims nor Arabs and follow a unique faith. They are considered infidels by the jihadists.

In 2014, jihadists massacred Yazidis, forced tens of thousands of them to flee, captured thousands of girls and women as spoils of war and used them as sex slaves.

The UN has said the atrocities committed against the small community may amount to genocide.

Cook also confirmed the death of French jihadist David Drugeon, who died in an airstrike near Aleppo, Syria on July 5. He was killed while driving his car and there were no other fatalities.

Drugeon was a member of a network of veteran Al-Qaeda operatives sometimes called the Khorasan Group, which plots attacks against the West, Cook said.

“As an explosives expert, he trained other extremists in Syria and sought to plan other attacks against Western targets,” he added.

He was born in 1989 and converted to Islam aged 13 before drawing close to ultraconservative Salafist Muslims.

US, ‘partners’ launch air strikes on IS jihadists in Syria