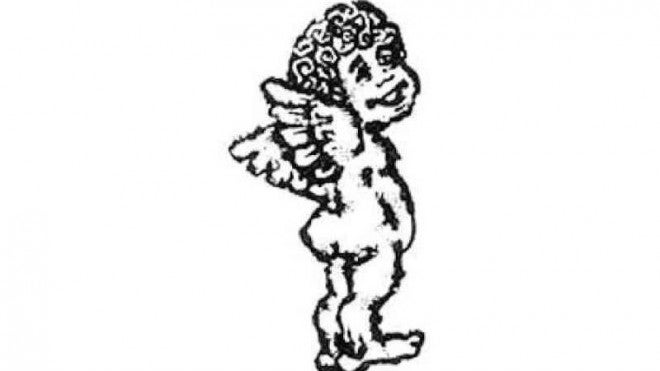 No one knew for certain how the pissing angel—the logo of Jingle Chordbook Magazine—came about (probably from the Manneken Pis or “little pee man” of Brussels), but many many years later, when people dissected the publication’s unique place in martial law history, the naked cherubim with the unapologetic posture and mischief stamped on its face would come to be interpreted as a sly dig at the powers-that-be.

The ubiquitous martial law censors were being hosed down and didn’t even know it; what pungent payback from a paper closed down for being a “corrupter of the youth!”

And perhaps unconsciously, judging from the contents of the magazine, which was soon resurrected as “Twinkle,” the publisher and its staff of mostly irreverent young writers and artists who recklessly ingested rock ’n’ roll with barely legal substances, tried their darndest to live up to the honor.

When it was first published in 1970, the chord book had the Beatles on its cover as well as the lyrics and chords of the most popular songs of the era. But even then, the streak of rebellion was evident. It gave good play to Nora Aunor, the tiny, dusky singer dismissed as bakya (uncool, plebeian) by most hip teens at the time.

With 100 or so pages of songs that readers could learn to play on guitar, thanks to a pullout chord sheet, Jingle soon became a staple in high schools, a hit among pimply young boys who wielded the guitar as a handy tool for courtship and porma (good form).

In fact, the Sandwich song “Betamax” alluded to such informal tutorial with the lines: Sa Jingle magazine/natutong maggitara; Sinifra ang mga kanta/sa cassette at plaka (roughly translates to: Learned to play the guitar through Jingle, learned by ear the chords to songs in cassettes and vinyl records).

But for P2.50 a copy, the monthly magazine also offered and solicited from readers essays, stories, poetry, letters and jokes, as well as artwork and cartoons from unpublished artists.

It became a sort of message board among friends—which led one blogger to describe it as the Internet of that era, the unofficial Facebook of the time, where friends can keep in touch and send messages and greetings, or just thrill at the sight of their names in print.

At a time when democratic space and media were severely constricted, having a medium to express themselves meant a lot to young people who had to keep their rage and hair in check.

Why, even photos of foreign rockers and musicians had to abide by the prescribed haircut under martial law, with a Jingle production man doing the honors of chopping the locks of the Beatles, Rolling Stones, Apo Hiking Society and other long-maned singers featured on the magazine’s pages.

Recounted Rodriguez: “With long hair banned, every rock star photo had to be cropped manually by Mang Ben of stripping, to comply with the censors.”

Sometimes, recalled another blogger, the stripper merely darkened the background to make the long hair less obvious. The faces then floated from the darkness, with the hair blending innocuously into the background.

No matter. With the magazine giving free rein to jokes and cartoons that satirized the cops (parak jokes), and green jokes (Grin Page) that thumbed down New Society precepts, as well as contributed essays, stories and poetry covertly attacking martial law, Jingle soon gained a reputation as “the unofficial freedom wall for those who wanted to say what they could not say anywhere else,” as former contributor Edwin Sallan put it.

The digs were subtle, but they “fomented skepticism and disrespect” for martial law, another blogger said.

For activists, who appreciated Jingle’s publication of underground songs of protest, the guitar became a weapon as well as an instrument of solidarity, as they gathered around a Jingle copy and a guitar after their protest rallies.

Another Jingle alumnus, filmmaker Lav Diaz, was less restrained in his paean published in Rogue Magazine in 2013: “Freedom was Jingle’s religion. Freedom was its ideology, its role model. It was more than a chord book. More than the Beatles, Hendrix, Dylan, Springsteen, Sex Pistols, Asin, Juan de la Cruz or rock ’n’ roll; it taught me the culture of freedom—to think, to move, to work freely. To seek to be free in all ways—without fear or compromise. That became my principle, my main rule in life.”

I wish I could say I had a lot to do with the martial law brinkmanship that Jingle became known for, as attested by that Inquirer story on millennials over the weekend, which described Jingle as the most credible publication at the time.

But I stayed for five years mainly because of the easy hours (this was a monthly after all) and the camaraderie among the cabal of writers and artists who hang out in that P. Tuazon office for the lead-flavored coffee, the pan de sal and sundry political gossip.

Then there was now top adman David Guerrero, newly arrived from the United Kingdom, whom we promptly whisked off to a side street off P. Tuazon, Cubao, where a fish-ball cart seemed to be stationed promptly at 3 p.m.

Come to think of it, was the fish-ball guy perhaps an intel agent watching us? Well, all he could report was this gaggle of jeproks (street-smart, hippie) girls double-dipping into the bottled sauces, which we had christened posthaste for David’s benefit: “This here’s the Cholera Special. And that one’s Dysentery Dilemma, while this murky goo is what we call El Tor Apocalypse.”

In short, we were having so much fun we were hardly aware of history being made. Perhaps the only history we vaguely recall being part of was that of OPM (original Pilipino music) coming into its own, with Basil Valdez, Mike Hanopol, Florante, Sampaguita, the MetroPop Festival and the New Moon concerts calendared as big coverage events.

“I always thought that political suppression was responsible for some of the best OPM produced at that time. It was like everyone channeled their rage or impotence into making music,” observed Rodriguez, my coassociate editor at that time, now content editor of a website design development company.

Of course there were the expected irritants: The stories had to be sanitized to get the censors’ approval—was that Minister Greg Cendaña’s of the National Media Production Center? But a few issues after, probably seeing that we publish only juvenile jokes, cartoons and songs with chords, we were allowed to go ahead and print, without passing the censors.

That was probably when the jokes became greener, the cartoons more surreal and idiosyncratic, and the pieces more tongue-in-cheek and irreverent. Who would tell, right?

Identifying Jingle as one of “them,” activist friends would drop by, ostensibly to ask for old issues, but really to drop off copies of underground publications (Ang Bayan, or ABA, and Taliba ng Bayan or TaBa), that some of their comrades would be picking up later.

Sure, why not? We had plenty of space in the filing cabinet and they’d be safely stashed behind fat folders of clippings and photographs of foreign acts. The Jingle office was also conveniently located between the University of the Philippines in Diliman, Quezon City, and several provincial bus terminals on Edsa in Cubao so it was a practical arrangement all around.

But we didn’t reckon with the sticky mix of show biz and politics. When Jingle started publishing the gossip rag “Jingle Extra Hot,” the place started buzzing with the shrill laughter and exchange among the mostly gay reporters of our sister publication.

Posters of half-naked men and women started blooming on the walls, and occasionally, we’d be bamboozled into meeting some of the more colorful members of the freak show, Pepsi Paloma and Dr. Rey de la Cruz among them.

Which we didn’t mind, really, until one of the sexy stars started dating the son of a high government official (here identified as Really Scary Guy or RSG—still in recent headlines, by the way).

The sexy starlet had once posed for a hard liquor brand as calendar girl or endorser. There she was, looking seductively at the camera, her ample breasts spilling out of the hands she had placed coyly over them, her caramel nakedness a sight to behold.

The riveting poster was shot and distributed a few months before the son of RSG decided to have exclusive rights to the sight. Rumors had it that the poor photographer, who shot that revealing pose, soon departed this earth, courtesy of RSG’s son.

So imagine our terror one afternoon when the publisher’s secretary entered our lair, closely shadowed by a character that had “Executioner” written all over him.

The guy who bore a striking resemblance to the heftier Corcolon brother of rapist Mayor Antonio Sanchez infamy had barely been introduced to us as the bodyguard of RSG’s son when he shoved the secretary aside and strode into our room.

He was looking for copies of sexy starlet’s bold picture, he said, as his boss wanted them destroyed. Did we have any, he growled, eagle eyes sweeping the room. Before his eyes could X-ray our filing cabinet, now bulging with ABA copies delivered just the previous day, my fellow editor quickly and graciously directed him to the show-biz area.

“Oh, you must be looking for the Extra Hot magazine staff. They’re over there,” she said smoothly. Whew! I thought, visions of martial law’s interrogation cells rapidly vaporizing with my sweat.

The only other time when the talons of martial law came close to clawing us at Jingle was when one of our staff members was hauled off to the Canu (for Constabulary Anti-Narcotics Unit) jail for bringing a joint with him during one of those New Moon concerts at the nearby Araneta Coliseum.

Why he and other druggies would tempt fate when two humongous Canu buses were prominently parked at the Araneta Coliseum lot, was beyond me.

Fortunately for us and our young readers at the time, the minions of martial law didn’t have enough gray matter to appreciate satire, sarcasm and subtlety. Until I left in 1983 to focus on the domestic demands of motherhood, the score stood at minions—0; pissing angel—1.