She’d rather not undergo any DNA testing to help determine the parentage and, subsequently, the citizenship of her first cousin, Sen. Grace Poe, TV-movie star Sheryl Cruz said on Tuesday.

Cruz showed up late for her supposed tell-all interview about her cousin at the Manila Hotel press conference of the Iglesia ni Cristo (INC) biopic on its founder, Felix Manalo, with organizers of the event denying knowledge of the interview.

Leigh Legaspi, Viva Films’ vice president for theatrical sales and marketing, told reporters that Cruz had been disinvited to the affair and asked that the event be spared from any controversy.

“She was advised not to attend the event anymore and not to make any interview in the vicinity of the hotel about any other topic including politics,” Legaspi said, adding that Cruz had been initially invited to the grand launch of the movie because she played “a cameo role” as one of the more than 100 performers in the movie.

It was not clear if Cruz was escorted by security out of the press con venue on the request of the movie producers, only that she was clearly unwelcome at the event. 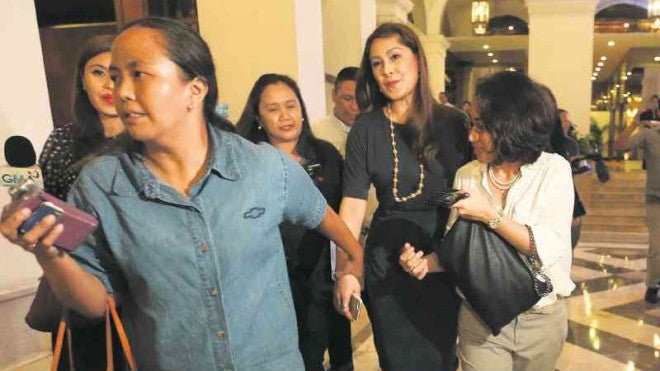 SCENE STEALER An unidentified companion leads TV-movie star Sheryl Cruz (in black, center) out of the Manila Hotel where she was scheduled to hold a tell-all interview on her cousin Sen. Grace Poe’s presidential run in 2016 and the DNA testing meant to establish the senator’s citizenship. But Cruz, who intended to hold the interview during the grand press conference of the Iglesia ni Cristo biopic of its founder Felix Manalo, was disinvited by its organizers. They did not want the event to be dragged into politics, the movie producers said. LYN RILLON

Cruz said she was speaking up to clear the name of her mother, former actress Rosemarie Sonora, who was rumored to be the real mother of Poe, with ousted authoritarian President Ferdinand Marcos as her real father.

“(People) can (have) all these different versions of what they think happened between my mom and Marcos but I know that it is not true. (So) I am sorry, I am not willing to (undergo) a DNA test. Please spare my family from this; they are so affected by it,” Cruz said.

“Ayoko nang madamay ang nanay ko (I don’t want to drag my mother into this). She wants to keep the peace in the family. I don’t want it to appear that my mom had an affair with another man not my dad,” Cruz added.

The presidential candidate, who renounced and later reacquired her Filipino citizenship after taking on American citizenship, is the subject of a case filed at the Senate Electoral Tribunal, questioning her citizenship and her qualification to hold public office.

Only natural-born Filipino citizens can run for election, and the case sought to prove that Poe, whose parents—and their citizenship—are unknown, might not be one.

Cruz, the daughter of 1960s stars Sonora and Ricky Belmonte had campaigned for Poe when she ran for senator in the 2013 elections, but said she was opposed to her cousin running for higher office in 2016.

“It’s a bit abrupt for her to run in 2016, and popularity cannot be translated into capability,” Cruz said in Tuesday’s interview. “She’ll make a fine president come 2022.”

Cruz said her being outspoken on Poe’s candidacy could threaten her movie career. Already, her manager had been forced to resign, she said.

“I am now without a manager and I can’t understand why I’m suddenly without a representative in my career,” said the 1980s star.

Cruz said she did not want to “belittle” her cousin’s capabilities, but neither did she want “to leave the country’s future to chance.”

“The lives of its citizens are not a game of chance,” she added.

Read Next
‘Muslim type?’ NBI sorry for sketch
EDITORS' PICK
On Day 2 of implementation, gov’t says workers now exempt from ‘no vax, no ride’ policy
Gear up and get ready to play with Yamaha Mio Gear
DOH: 28,471 new COVID-19 cases in PH; active cases now 284,458
Metro Manila posts lowest temperature yet this ‘amihan’ season at 19°C
Over 3 Million worth of prizes to be won at Smart Padala’s SENDali Manalo Promo!
Acer starts the year off strong with the Aspire Vero National Geographic Edition
MOST READ
Emma Stone calls Andrew Garfield a ‘jerk’ after he ‘lied’ about his ‘Spider-Man: No Way Home’ appearance
LOOK: Edu Manzano, Cherry Pie Picache enjoy Palawan with her son Nio Tria
Unvaccinated has rights but it has limits—DOJ
Retirements prompting major reshuffle in PH military
Don't miss out on the latest news and information.