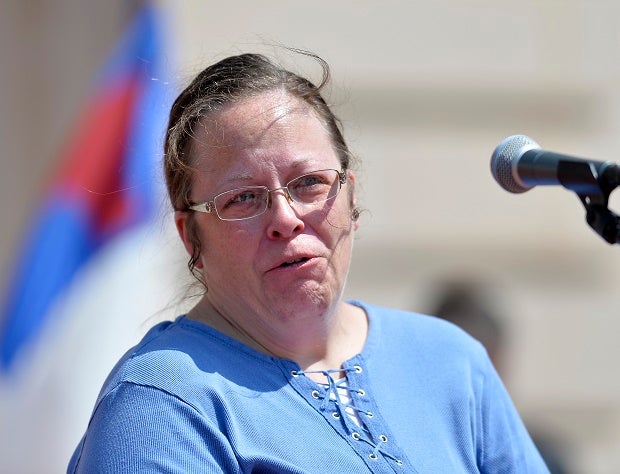 Rowan County Kentucky Clerk Kim Davis shows emotion as she is cheered by a gathering of supporters during a rally on the steps of the Kentucky State Capitol in Frankfort Ky., Saturday, Aug. 22, 2015. Davis spoke at the rally organized by The Family Foundation of Kentucky. The crowd of a few thousand included churchgoers from around the state. Davis has been sued by The American Civil Liberties Union for denying marriage licenses to gay couples. She says her Christian faith prohibits her from signing licenses for same-sex couples. AP

Davis, who returned to work this week after five days in jail for defying a federal court order, had again tried to persuade the Sixth Circuit U.S. Court of Appeals to delay a judge’s mandate that she issue marriage licenses to all couples.

Davis, the clerk of rural Rowan County, spurred a fiery debate about religious freedom and the rule of law when she refused to issue licenses after a Supreme Court ruling in June that effectively legalized gay marriage nationwide. The American Civil Liberties Union filed a suit against Davis on behalf of four couples, two straight and two gay, and US District Court Judge David Bunning ordered her to issue the licenses, not only to those four couples but also to any other qualified to be married.

Davis defied the order, lost a string of appeals, and opted to go to jail for five days rather than issue the licenses. While she was incarcerated, her deputies issued licenses, altered to remove Davis’ name. Both same-sex couples named in the suit received one.

Now Davis’ lawyers with the Liberty Counsel, a firm that opposes gay rights, argue that because those couples have received the licenses, Davis should not have to issue any additional licenses while the case is pending.

The appeals court scrapped that request Thursday on a legal technicality: Davis’ lawyers did not first ask Bunning to delay his mandate, as federal court rules require, before they appealed to the higher court. The lawyers, in justifying skipping that step, cited the judge’s “extraordinary doggedness.” The appeals court wrote that “this is not a valid reason.”

Davis will likely refile the same appeal now with Bunning.