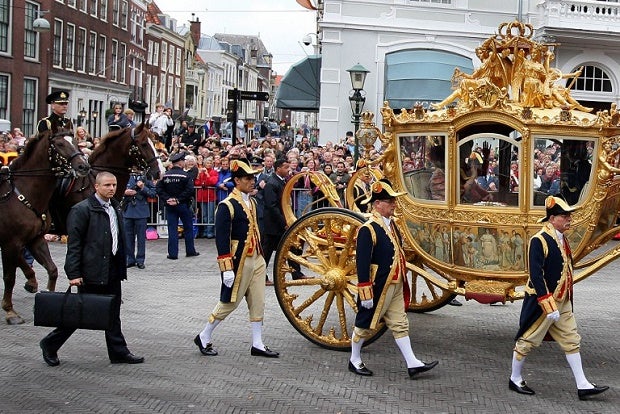 The Golden Coach with Dutch Queen Beatrix heads for the Ridderzaal, house of parliament, for the Queens Speech, the annual opening from the Dutch parliamentary year, on September 15, 2009 in The Hague. AFP ROYAL IMAGES OLAF KRAAK

THE HAGUE, Netherlands—Dutch King Willem-Alexander and Queen Maxima left for Parliament’s opening on Tuesday for the last time before their opulent and historic “Golden Coach” undergoes an extensive refit.

Made of teak wood and covered with gold leaf, the coach is used each year to transport the Dutch royals from the king’s offices at Noordeinde Palace to Parliament about a kilometer (0.6 miles) away.

Part of the pageantry of “Prinsjesdag” (Prince’s Day), which is traditionally held on the third Tuesday of September, the royal couple is cheered by thousands of well-wishers along the way.

Drawn by eight black steeds, the coach has a plush interior and has been in use by the Dutch royals since 1901, three years after it was delivered to then reigning Dutch Queen Wilhelmina.

But it has been showing signs of wear in recent years and will now undergo “maintainance over the next three or four years,” the Dutch government said in a statement.

The royals will in the meantime ride in the much older “Glass Coach” which, although not as glitzy on the outside, is as opulently upholstered with purple velvet and a roof upholstered with white silk.