Aquino: No Caucasians killed in Mamasapano

President Benigno Aquino III on Thursday dismissed as kuwentong kutsero, or hearsay, the report that two Caucasians were killed in a clash between police Special Action Force (SAF) commandos and Moro rebels in Mamasapano, Maguindanao province, in January, as he affirmed that it was the SAF that took down Malaysian terrorist Marwan.

“That claim is like, if not exactly, kuwentong kutsero at this point,” Mr. Aquino said in a press conference in Malacañang, following his announcement of the results of a discreet investigation he had ordered into the “alternative versions” of what really happened in Mamasapano on Jan. 25 during the SAF operation to get Marwan, whose real name was Zulkifli bin Hir.

He was informed of the alternative versions by various sources, he told the Inquirer two weeks ago.

Justice Secretary Leila de Lima told reporters that with the final report on who killed Marwan, President Aquino and the government had found closure.

During his national address, President Aquino showed three pictures that he said convinced him that indeed it was the SAF that killed Marwan.

Asked if there were other leads pursued aside from the pictures, De Lima told reporters that she was “not at liberty” to discuss them.

The President warned that those who were after the $5-million bounty on Marwan’s head offered by the US government could be the ones behind the alternative versions of the events.

Nine other SAF commandos from the 84th SAC, the strike force, were killed in the operation.

Mr. Aquino himself disclosed the investigation of the “alternative” versions of how Marwan died during the Meet the Inquirer Multimedia forum last week.

They only look Caucasian

At the same press conference, the President insisted that there were no foreigners in the combat operation, whether they were “Caucasian looking,” Americans, or British.

“The SAF did not have foreigners with them. Our Constitution prohibits foreign troops to operate on our soil,” Mr. Aquino said.

He added that if foreigners insisted on joining the operation, the SAF, as policemen, would have arrested them.

De Lima told the Inquirer in an interview that government investigators had ruled out the claim of a government witness that two Americans were killed in the Mamasapano clash.

“Right now, that [has been] discounted. If that video is true, [the men] look Caucasian but they could be [two] of the [SAF] casualties. We traced it and there were [SAF men] who had mestizo features and they were huge, around [1.8 meters] tall,” De Lima said.

De Lima added that the National Bureau of Investigation- National Prosecution Service Special Investigation Team (NBI-NPS SIT) was in the process of identifying those SAF officers.

In their 225-page report, the NBI investigators took note of what “Marathon,” the code name of their primary witness, said: Two “Americans” died in the village of Tukanalipao, in Mamasapano.

Marathon said the two bodies “did not look like Filipinos.” But De Lima said the witness’ claim was “hearsay.”

“About [the Americans’] actual participation in the combat operations, there was none,” De Lima said.

Exact roles of US

She said, however, that the ongoing second part of the DOJ-NBI investigation was looking into the “exact roles” played by the US government in the SAF counterterrorism operation against Marwan and his Filipino companions Basit Usman and Amin Baco.

“We are looking into the exact roles [played by the US government] because what has been said was they helped in intelligence and information sharing and the medical evacuation,” De Lima said.

The first NBI report said that they were “fully aware of the need for secrecy in intelligence and antiterrorism operations and to maintain it for future Philippines-United States partnership in this regard.”

“But criminal investigations and national security are not mutually exclusive. One only needs to frame the issue and ask the relevant questions,” the report said.

The report said it was not clear whether the six Americans who were reported to be at the SAF Tactical Command Post in Shariff Aguak, Maguindanao, violated Philippine penal laws.

It said that the investigative and prosecutorial arm of the government could not “just dismiss the presence of foreigners, however limited, at or near a crime scene or at the first instance refrain from investigating them without even a sketch of what they were doing there in the first place.”

American involvement in the Mamasapano operation also did not fail to draw attention during the Senate inquiry into the debacle. 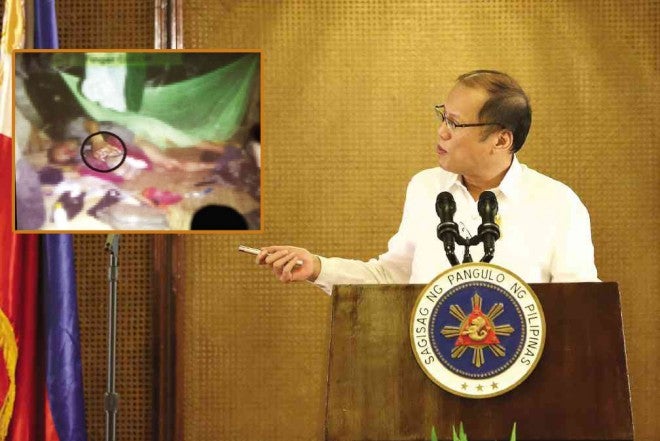 BODY OF EVIDENCE President Aquino declares that it was the police Special Action Force (SAF) that killed Malaysian terrorist Marwan on Jan. 25 after his order of a discreet probe on “alternative versions” given by various sources yielded negative. He explains the series of authenticated photos which convinced him of SAF’s rightful claim. JOAN BONDOC

The Senate investigation report released in March said the roles of the Americans “cannot be readily dismissed as those of mere observers.”

One telling detail of their involvement was the instance when one of the Americans ordered Maj. Gen. Edmundo Pangilinan, commanding general of the Philippine Army’s 6th Infantry Division, to fire artillery during the clash between the SAF commandos and Moro rebels.

Pangilinan refused, retorting: “Do not dictate to me what to do. I am the commander here.”

This detail came out during an executive session and was made public only through the investigation report.

The Senate report noted that the United States’ investment in the SAF mission was evidenced by the equipment and training given to the commandos.

But it also cited the testimony of the sacked SAF chief, Director Getulio Napeñas, that no US troops took part in the combat operation.

Napeñas identified one of the Americans as “Mr. Al Katz,” who handled the training of the SAF strike force.

The Senate report also cited a Supreme Court ruling stating that US soldiers in exercises in the Philippines may not engage in combat, except in self-defense.

The Senate report said that in the light of the Mamasapano incident, there was a need to refine and delineate the defense relationship between the Philippines and the United States.

The NBI report emphasized that how Marwan’s finger, sliced off for DNA tests, “actually reached” the US Federal Bureau of Investigation (FBI) “was not pursued in detail.”

“Let us recall. What does the alternative narrative say? It was posited that one of Marwan’s companions killed him—the same one who cut off his finger and gave it to the SAF. But it is clear from the presentation today, the SAF was there; we can no longer doubt that it was the SAF who took Marwan’s finger. This also means all the other accounts about the alternative narrative are baseless, and consequently have no relevance,” the President said.

“He should have believed us and his policemen earlier,” Napeñas said in a talk with reporters in an office in Greenhills, San Juan City, on Thursday after President Aquino’s televised news conference.

“We are thankful that he finally believed us. I hope you will believe in your policemen who are just doing their job. I hope you will trust the [Philippine National Police] and the SAF,” said Napeñas, who is now retired.

He said the results of the investigation vindicated the SAF.

“I was not surprised. I expected this all along, the truth would eventually come out. We have credible evidence, and we were acting in good faith,” he said.

Napeñas, however, lamented that he and seven others were still facing criminal and administrative charges in the Office of the Ombudsman over the Mamasapano operation.

He said the SAF should be rewarded instead of punished with prosecution for the debacle, adding that no plan or operation was perfect.

“This is not only the SAF’s accomplishment but of the whole country. [Marwan was] an international terrorist, the Philippines gave justice to his 200 victims in Bali, Indonesia. Then we charge the SAF?” Napeñas said.

Napeñas’ lawyer, Vitalliano Aguirre III, urged the dismissal of the charges against the SAF officials.

Director Benjamin Magalong, who chaired the PNP board of inquiry that probed the Mamasapano clash, said the SAF troopers were now “vindicated,” adding that “they all deserve the credit and honors.”

Magalong earlier stood by the inquiry board report that concluded that Marwan was killed by the SAF and not by the terrorist’s own security aides.

He added jokingly that he no longer needed to resign, referring to his earlier statement that he would quit if it was proven that the SAF did not take down Marwan.

The current SAF chief, Director Virgilio Lazo, said: “We are happy because our story has been proven to be the truth all along.”

Chief Supt. Wilben Mayor, spokesperson for the PNP, said the PNP continued to press for justice for the slain SAF commandos.

“We stand by our position that our SAF troopers killed Marwan in a law enforcement operation. We thank the President for his noble intention in seeking the truth and justice for our heroes,” Mayor said.

House Speaker Feliciano Belmonte Jr. said President Aquino’s final word on who killed Marwan should lead to the filing of charges against Moro rebels and bandits who killed the SAF commandos.

“Yes [I’m satisfied with his clarification] but he should file the case immediately,” Belmonte said.

Magdalo Rep. Gary Alejano said Mr. Aquino had reopened the wounds of the families of the SAF commandos.

“Mr. President, just do it. File the charges. [You] should have filed the case against the SAF killers as early as April,” Alejano said.

Antipolo Rep. Romeo Acop said the President should file the charges as soon as possible to finally “close the book on Mamasapano.”

“There is only one truth and the President knows it. Charge them now in order to close the book on this tragedy,” Acop said.

ACT Teachers Rep. Antonio Tinio said the President had only himself to blame for being forced to “publicly eat his words” on Mamasapano.

Tinio said the President was probably reluctant to file charges against the killers of the SAF commandos because it would mean he had to bring charges against officials who gave the green light to the mission.

“Will he file charges against former police chief Alan Purisima? What about his own role [in] authorizing the [mission] in the first place?” Tinio said. With reports from Leila Salaverria, Julie M. Aurelio and Gil C. Cabacungan