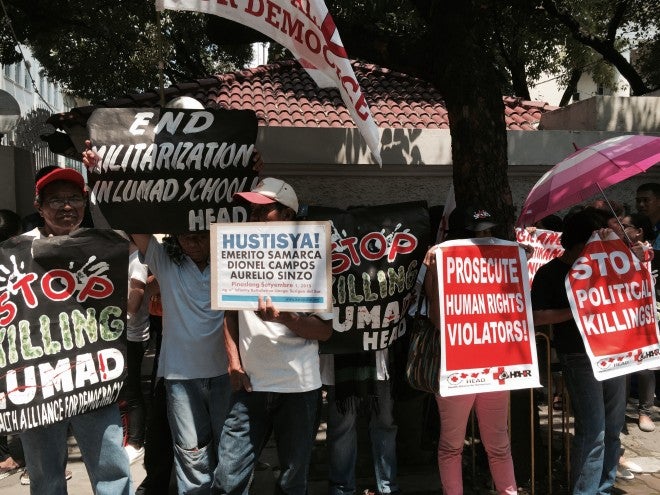 Human rights group Karapatan and some members of the Lumad community call for DOJ assistance on alleged military harassment.

HUMAN rights group Karapatan together with several members of the Lumad tribe expressed disappointment over the canceled meeting with Justice Secretary Leila de Lima whom they intend to seek help on the alleged indiscriminate harassment and killings of indigenous peoples (IP).

Present to meet the Justice Chief were witnesses to the killing of Lumad leaders Dionel Campos and Datu Juvello Sinzo to share information about the Sept. 1 incident.

Karapatan was also supposed to present the case of the Pangantucan massacre where five Lumads were killed including a 70-year old blind man and two minors whom members of the 4th Infantry Division tagged as Communist members.

The meeting was canceled due to a scheduled press conference in Malacañang on the Mamasapano investigation which was conducted by the National Prosecution Service-National Bureau of Investigation (NPS-NBI). Both agencies are under the DOJ.

When asked whether de Lima had given her commitment to meet them in another date, Palabay lamented that the DOJ wants them to meet an undersecretary instead.

De Lima earlier mentioned of a possible inter-agency investigation on the harassments and human rights violations committed against the Lumads.

“Because of her mandate as the Justice Secretary, she [ de Lima] is in the best position to answer questions from the victims, the relatives, tungkol sa kaso na-file nila,” Palabay stressed.

In a press statement, Karapatan-Caraga narrated that at around 4 a.m. on September 1, “known elements” of the Magahat-Bagani “opened fire at Dionel Campos and Aurelio Sinzo as community members in Km. 16, Han-ayan, Barangay Diatagon, Lianga, Surigao del Sur were roused from their sleep.