Syrian refugees seek new passports as a ticket to Europe 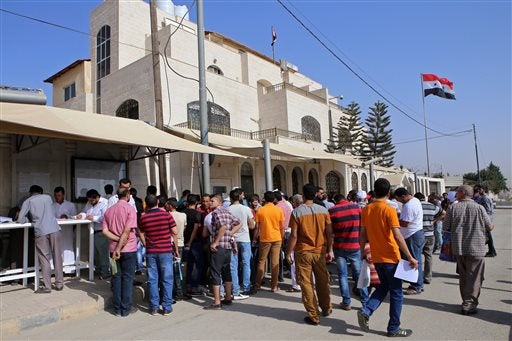 In this Tuesday, Sept. 15, 2015 photo, Syrian refugees gather outside their embassy waiting to apply for passports or to renew their old ones, in Amman, Jordan. Hundreds of Syrian refugees line up at their country’s embassy every day for a long shot at a better future in Europe: They apply for Syrian passports that can get them into Turkey without visas, and from there plan to start dangerous journeys by sea and land to the continent. AP

AMMAN, Jordan — Hundreds of Syrian refugees line up outside their embassy in Jordan every day for a long shot at a better future — applying for new passports that allow them to enter Turkey legally and from there start on a dangerous trek to Europe.

The crowds in Amman have been turning up since Syria began issuing passports for large numbers of refugees without travel documents. Also, cuts in international aid have made the refugees’ survival even tougher in Mideast host countries like Jordan.

In a measure of their despair, some of those waiting in line said they sold their wives’ gold dowry or went deeper into debt to pay $400 for a new passport, double what most make per month with off-the-books odd jobs.

There is also a sense of urgency among the refugees, after several European countries re-imposed border checks in recent days to stem the flow of migrants.

Refugees preparing for the journey said they are willing to gamble. They believe there is no future for them in overburdened Jordan, where they can’t work legally or provide for their families.

“The minute I get the passport, I will fly to Turkey,” said house painter Ali Mohammed, 33, one of those in line this week at the Syrian Embassy. Mohammed, who fled Syria in 2012, said his final destination is Germany, where some of his relatives have found asylum.

The new possibility of a direct Jordan-Turkey route feeds into growing migration from the conflict-scarred Middle East to an increasingly overwhelmed Europe.

EU member states have been arguing over a solution, with some rejecting Germany’s proposed quota system for accepting migrants, saying it’s too big a burden. Others believe quotas will only encourage more migration and that the world must send more help to keep refugees in host countries neighboring Syria. 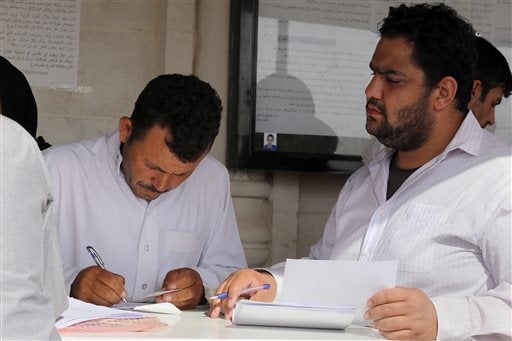 In this Tuesday, Sept. 15, 2015 photo, Syrian refugees prepare their documents to apply for passports or to renew their old ones outside their embassy, in Amman, Jordan. AP

The International Organization for Migration says more than 464,000 migrants and refugees crossed the Mediterranean Sea to Europe this year, and that 2,182 died on the way. The agency says among those making the crossing were 175,000 Syrians traveling via Turkey and Greece.

Germany has taken in the most, by far, with some 450,000 migrants registered so far this year. About one-third arrived since the beginning of August — though this also includes many migrants from Eastern Europe. Germany has said Syrians have the best chance of gaining asylum.

For now, most of the more than 4 million Syrians who fled their country since the conflict broke out in 2011 still live close to home — the main asylum countries are Lebanon, Turkey, Jordan and Iraq.

But life in these countries is becoming increasingly difficult. Faced with growing funding gaps, international agencies have cut back sharply on cash and food aid to refugees. More than one-third of 630,000 Syrian refugees in Jordan were dropped from a U.N. food voucher program in September.

Meanwhile, the Syrian government decided in late April to begin issuing passports to refugees. The pro-government newspaper al-Watan said at the time that the decision would facilitate the movement of hundreds of thousands of refugees without passports and bring significant foreign currency income for Syria.

The new policy also meant the door to Europe — from Turkey by sea to Greece and then overland through the Balkans — opened wider. Turkey does not require visitors’ visas for Syrians, according to the country’s Foreign Ministry website and an official at the Turkish embassy in Jordan.

With new passports in hand, Syrians can fly from Jordan to Turkey, rather than travel overland through their dangerous, strife-torn homeland first.

Ayman Alloush, Syria’s top diplomat in Jordan, said Tuesday that his embassy now issues or renews about 10,000 passports per month.

He said he believes many of the refugees want to leave Jordan, where the situation for them “is not good at all,” but denied Syria is encouraging the exodus.

The international community should invest more in host countries like Jordan if it hopes to stem the flow to Europe.

“If the situation is better … nobody would like to take this dangerous journey to Europe or another country,” he said.

Mohammad al-Halayka, a former head of the foreign affairs committee in the Jordanian parliament, said the departure of several thousands of refugees will not make a big difference for Jordan, considering the large number remaining.

“The refugee burden has exhausted Jordan,” he said. 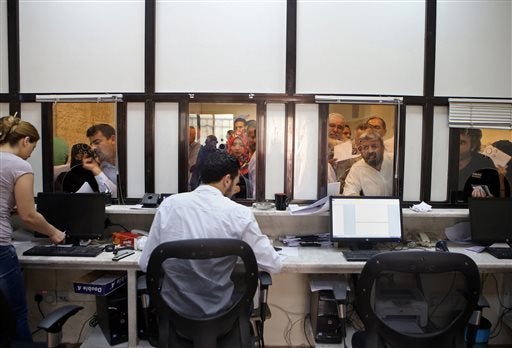 In this Tuesday, Sept. 15, 2015 photo, Syrian refugees apply for passports inside their embassy, in Amman, Jordan. AP

Obtaining passports is only the beginning, said several refugees outside the Syrian Embassy on Sunday. Some said they won’t leave Jordan just yet, since they don’t have enough money to pay smugglers in Turkey — according to refugees as much as $2,500 per person.

For most, Germany remains the top destination, partly because of recent ambiguous comments from German officials who said they expect up to 1 million refugees and migrants by the end of the year. Some refugees mistook the forecast for a promise.

Mohammed, the house painter, said he is determined to leave, despite the latest border restrictions in Europe.
On Sunday, Mohammed was told he could pick up his passport in five to six weeks. Mohammed sold his wife Myasser’s last pieces of gold — two bracelets — to pay the fee for the document.

With passport in hand, he will fly to Turkey. His wife, who suffers from spinal muscular atrophy, will return to Syria temporarily with their sons, 5-year-old Hussein and 4-year-old Omar, to live with her parents. Once he reaches Germany, Mohammed plans to seek permission to bring over his family.

Mohammed pins his hopes on the example of his brother-in-law Nidal, a 34-year-old attorney, who reached Germany via Turkey nine months ago. Nidal has settled in the town of Saarbruecken and in July was joined by his wife Doa, Mohammed’s sister.

The two men spoke over the phone on Sunday night.

“Guten Abend,” Nidal said, conversing in beginner’s German when Mohammed handed the phone to a reporter. Switching to Arabic, Nidal said the family is settling in.

Mohammed said he wants the same for his wife and children. “If I work, I can take care of my children,” he said. “I’ll live a decent life.”

Looking up at an old wall-mounted TV at his tiny apartment in the Jordanian town of Zarqa, he pointed to the images of streams of refugees walking in Europe.