US warns Kremlin Assad has no role in anti-ISIS fight 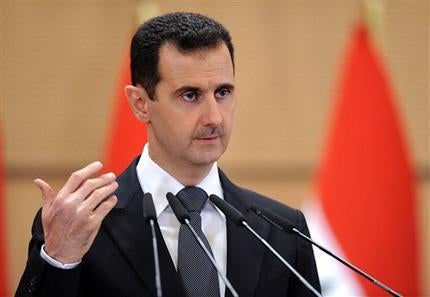 WASHINGTON, United States—Washington warned Russia on Tuesday that Syrian leader Bashar al-Assad has no role in coalition operations against the Islamic State of Iraq and Syria group and must step down to allow a political settlement.

“Secretary Kerry made clear that Russia’s continued support for President Assad risks exacerbating and extending the conflict, and undermining our shared goal of fighting extremism,” his office said.

Kerry “reaffirmed the US commitment to fight ISIL (ISIS) with a coalition of more than 60 countries, of which Assad could never be a credible member, and emphasized the US would welcome a constructive Russian role in counter-ISIL efforts,” it added, using an acronym by which the ISIS is known.

“The secretary stressed that there is no military solution to the overall conflict in Syria, which can only be resolved by a political transition away from Assad.”

READ: US warns Russia over ‘military buildup’ in Syria

The United States had hoped to convince Russia, a long-standing ally of Damascus, to help convince Assad to step down and permit a transitional regime to negotiate an end to Syria’s civil war.

Washington and its allies are bombarding ISIS positions inside Syria, and supporting “moderate” rebel forces there, but insist the Damascus government itself is part of the problem.

But Moscow sees Assad’s army as a bulwark against Islamist rebels, including the ISIS, and has continued to send military equipment and trainers to bolster its position.

US warns Russia of ‘additional consequences’ over Ukraine