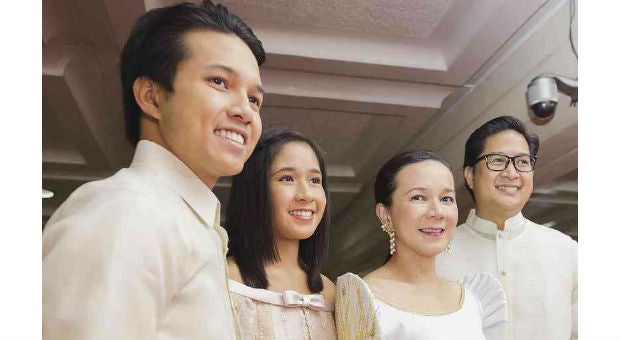 Celebrities from the entertainment world and members of four political parties are expected to join Sen. Grace Poe Wednesday as she announces her run for the presidency at Ang Bahay ng Alumni on the campus of the University of the Philippines in Diliman, Quezon City.

Friends from show business are reportedly on the guest list of the UP proclamation, said a show-biz insider.

Poe’s announcement would make the presidential election in May next year a three-cornered fight. Vice President Jejomar Binay of the United Nationalist Alliance and Interior Secretary Mar Roxas of the ruling Liberal Party (LP) earlier declared that they would run for President.

The senator is also expected to present to the nation on Wednesday her platform of government.

“Senator Poe will present to the people the core principles and programs guiding her run for public office,” said a source privy to the details of Poe’s plans for Wednesday.

Noel said his party-list group was among the organizations that would attend the gathering to show support for Poe’s presidential run next year.

“I am praying and hoping that it will be a declaration for her run for President in 2016. She (Poe) will face the press the following day at Club Filipino (in Greenhills, San Juan City) hopefully to announce her running mate,” Noel said.

According to Sen. Francis Escudero’s camp, Poe will announce Escudero as her running mate at the latter’s press conference at Club Filipino.

At least four political parties are forming a coalition to support Poe.

“She will run under a political coalition; she will remain independent,” said Zamora.

Zamora said the leaders and members of NP, NPC, NUP and Makabayan were scheduled to have dinner with Poe on Tuesday night, the eve of the senator’s much-anticipated announcement.

He said he expected Poe’s coalition to grow in the run-up to the May 2016 elections, with defections from other parties, including the LP.

It is hardly surprising that Poe’s proclamation would turn into a star-studded event. After all, she is the adopted daughter of the late Fernando Poe Jr. (FPJ) and Susan Roces, considered the king and queen of Philippine movies.

Celebrities from the country’s top three networks, including some who campaigned for President Aquino in 2010, are supporting Poe’s quest for the presidency, said the source, who asked not to be named because he was not authorized to speak about the event.

Actor Dantes, a known supporter of Aquino, who appointed him National Youth Commissioner, is reportedly switching party lines, leaving the LP to run for senator under Poe’s banner.

In previous interviews, however, Dantes repeatedly denied rumors of his supposed political aspirations.

Another supporter of Aquino, singer Ogie Alcasid and wife, fellow singer Regine Velasquez, are also rooting for Poe, along with other celebrity couples Carmina Villaroel and Zoren Legazpi and Richard Gomez and Rep. Lucy Torres-Gomez, said the same source.

Alcasid is currently seen on TV5, Villarroel on ABS-CBN and Legazpi and Velasquez on GMA 7.

Lovi Poe, a biological daughter of FPJ, will undoubtedly campaign for the senator, said the source. Heart Evangelista, Lovi’s friend and costar in the GMA 7 soap opera “Beautiful Strangers,” will join the Poe bandwagon, too.

Evangelista is married to Senator Escudero, Poe’s friend and a potential running mate of the senator.

Escudero will make an announcement of his political plans on Thursday.

His office said the senator would make his political plans known at 10 a.m. on Thursday at Kalayaan Hall of Club Filipino in San Juan City.

Poe can count on another high-profile celebrity as a silent supporter, according to the source.

The President’s sister, ABS-CBN host Kris Aquino, has been vocal about being torn between the administration’s standard-bearer Mar Roxas (“a close family friend”) and Poe (due to her friendship to the Poes, particularly Roces).

Poe supposedly earned the stamp of approval of Kris Aquino’s relatives, the other members of the Cojuangco clan, Danding (businessman founder of the NPC), Peping and Tingting.

“I was not invited,” Manila Mayor Joseph Estrada said, referring to Poe’s scheduled announcement to seek the presidency.

“I don’t know what’s on her mind, but to be fair, I will still not go if invited,” the former President said in an interview with the Inquirer.

“I don’t want to be misunderstood. People might get the impression I am supporting her,” Estrada said, adding that he has not yet decided on whom to support in the coming presidential election.

“I’m still thinking if I will support her if she seeks my support.”

Estrada said he was very close to Poe (his goddaughter), Binay (his kumpadreng buo) and Roxas, who he said was a very good Cabinet member during his short-lived stay in Malacañang.

Speaker Feliciano Belmonte Jr. got an invitation to Poe’s big event. But he won’t show up.

Belmonte, an LP vice chair, said what he got was a courtesy invitation as the event would be held at UP Diliman. “It is happening in my district but I will be here” in the House, he told reporters in a chance interview.

“Duty first,” he said when asked why he would not attend.

Belmonte earlier indicated his preference for Poe to be the LP standard-bearer but toed the line when the President, the party’s titular head, formally anointed Roxas as his chosen successor in July.

In the country’s colorful brand of democracy, many movie stars and other celebrities use their popularity to launch successful political careers.

FPJ, with no previous political experience, narrowly lost the 2004 presidential election amid allegations his opponent Gloria Macapagal-Arroyo stole crucial votes from him. He died seven months after the election.

But Grace Poe then showed the family name still had massive political capital by securing the most votes in the 2013 senatorial election.

At that time she had no political experience and had only recently returned from the United States.

Poe’s opponents have filed legal challenges against her ahead of her planned presidential run, because she has no original birth certificate to prove she was born to Filipino parents.

They have also said her previous time in the United States should rule her out.

“She has the critical mass required for a serious run for the presidency as well as the possibility of winning it,” Casiple said.

Poe is an independent politician but is expected to secure the support of a major party that is currently part of Aquino’s ruling coalition.

Anybody could make it in a three-cornered fight, said Sen. Sergio Osmeña III, who helped in Aquino’s campaign in 2010. “Anybody can win depending how well or badly they managed their campaign,” Osmeña told reporters.

Poe has also garnered support from influential members of the Professional Artist Managers Inc. (Pami), according to a filmmaker.

Sen. Tito Sotto, one of the hosts of the noontime show “Eat Bulaga” (aired on GMA 7) is a known Poe supporter, the source pointed out.

“Although I cannot speak for everyone, the Dabarkads (“Eat Bulaga”) has the tendency to support the candidate I’ve chosen—even if they do not campaign openly,” Sotto told the Inquirer.

As for “AlDub” (Alden Richards and Yaya Dub), the show’s management, including its main hosts, firmly believe in shielding the duo from politics. “AlDub is ‘Eat Bulaga’ property. We don’t want it dragged into politics,” Sotto said.

He recalled that the last time he talked to Richards, the actor expressed reluctance in campaigning for any candidate.

Still, Sotto asserted that he would “support Poe whatever her decision would be.”

Sotto, however, cannot make it to Wednesday’s event at UP Diliman due to previous commitments. “In any case, this event is strictly nonpolitical. Only family, friends and representatives from NGOs will be there.”

“This could mean that Poe will get the support of the popular tandem of AlDub and the other hosts of the noontime show ‘Eat Bulaga,’” said an insider in the Poe camp.

There is talk that handlers may want to shield AlDub from politics, but the “Eat Bulaga” team can support Poe either publicly or privately.—With reports from Gil C. Cabacungan, Christine O. Avendaño, Jodee A. Agoncillo, DJ Yap and AFP