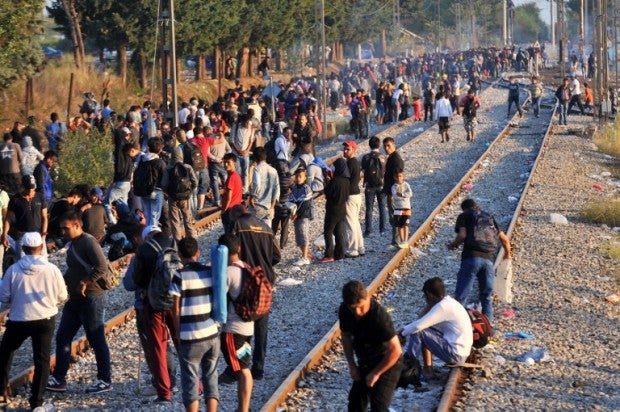 RÖSZKE, Hungary—EU ministers failed to reach agreement Monday on a quota plan to share the burden of a flood of refugees as Hungary closed the main migrant crossing with Serbia and other European countries imposed border checks.

With Europe’s 20-year-old Schengen passport-free zone creaking under the pressure, Austria and Slovakia said they would follow economic powerhouse Germany’s lead in reinstating frontier controls to deal with the flow of people.

Poland said it was considering similar steps while the Netherlands said it would have “more patrols” on its frontiers.

Long traffic jams built up on the Germany-Austria border and refugees were left stranded on non-EU Serbia’s side of the frontier with Hungary in the latest chaotic scenes from the biggest such crisis since World War II.

Yet amid fierce opposition from eastern states, EU ministers failed to reach unanimous agreement on a plan to share out 120,000 refugees and ease the burden on frontline states from the tide of people fleeing war zones such as Syria and Afghanistan.

“We did not have the agreement we wanted,” EU migration commissioner Dimitris Avramopoulos said after the emergency meeting in Brussels, adding that they hoped to reach a deal in October.

But the crisis is moving faster than the EU can handle, with more than 430,000 people having crossed the Mediterranean to Europe so far this year, 2,748 dying, and more coming every day.

Hungary has vowed to begin arresting illegal migrants from Tuesday, with police fencing off a gap in the razor-wire barrier with Serbia that hardline Prime Minister Viktor Orban’s government is racing to complete.

At the Roszke border crossing, several dozen migrants, including many children, were stuck on the Serbian side of the border, with several women crying, after police shut the border, AFP journalists saw.

“We had heard the Hungarians were closing their border, but they told us it would be Tuesday,” cried Hassan, a Syrian in his thirties who was trying to reach Sweden.

The migrants were redirected to the official crossing around two kilometers (1.2 miles) away, from where they were being taken on buses to Roszke train station, officials said.

Hungary is on the front line of Europe’s migrant crisis, with almost 200,000 people traveling up from Greece through the western Balkans and entering the country this year, most of them seeking to travel on to Germany.

But other countries are now feeling the strain too, and Germany shocked its EU partners on Sunday when it admitted that it had to reinstate border controls eliminated under Schengen in the late 1990s to cope with the influx.

Vice Chancellor Sigmar Gabriel said there were “many signs that Germany this year will take in not 800,000 refugees, as forecast by the interior ministry, but one million.”

Austria and Slovakia pounced on the U-turn by Chancellor Angela Merkel’s government—which had previously said it would throw open its doors to Syrian refugees—to reinstate their own border checks.

Poland said it would impose border controls at the first sign of “any threat” while the Netherlands promised more patrols.

EU states can impose temporary controls for security reasons under the Schengen treaty but there are fears the very ideal of a borderless Europe could collapse.

Divisions were rife over the plan unveiled last week by the European Commission—the EU’s executive—for binding quotas to redistribute 120,000 refugees.

Hopes of a unanimous deal collapsed in the face of opposition from Hungary, the Czech Republic, Slovakia and Romania at the crisis meeting in Brussels, officials said.

“There was no consensus, several countries disagreed,” Slovakian Interior Minister Robert Kalinak said, adding it was “crucial” for EU leaders to have a special summit on the issue.

However, the EU ministers formally approved a plan first aired in May to relocate 40,000 refugees.

They also approved plans for military action against people smugglers in the Mediterranean, seizing and possibly destroying boats.