Driven to succeed, grads find right vehicle for their dreams 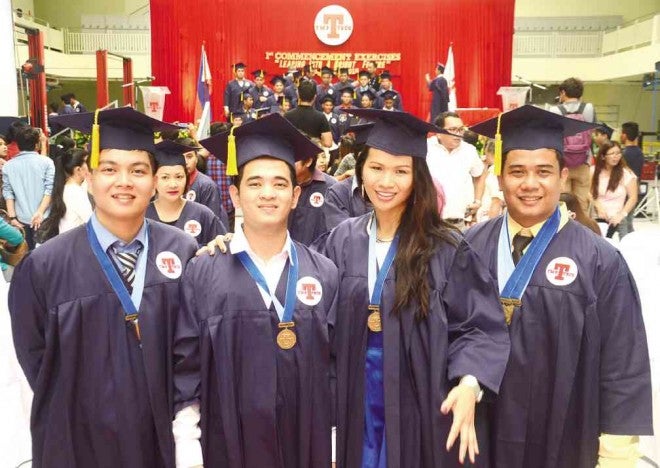 Matito was one of the 110 graduates of TMP Tech’s two-year Toyota General Job Automotive Servicing Course.

The graduates will be “protechnicians,” the third of five ranks in the Toyota system. They will be integrated into the technician pool of TMP and two other companies in Australia and in Saudi Arabia.

“A dealership offered me a job during the ceremonies. Someone gave me his calling card,” Matito revealed. There were also jobs waiting for him in the two dealerships where he did his on-the-job training.

Before he enrolled at TMP, the 24-year-old from General Mariano Alvarez (GMA), Cavite province, moved from one job to another.

“I worked at a fast-food chain, was a bagger in a supermarket and a toll teller at SLEx (South Luzon Expressway). The ‘end of contract’ was a regular (event). I would apply (for a job), submit the requirements, get hired, then leave, like a cycle.”

Matito, who tried after high school graduation to study Psychology in Manila but had to drop out because of financial constraints, was encouraged by an aunt to apply at TMP Tech which, two years ago, was about to open.

The aunt offered to shoulder his expenses, which was over P100,000 (other students were on scholarship).

Matito’s class was the first ever to graduate from the TMP Tech program. In ceremonies attended by TMP Tech president David Go, TMP president Michinobu Sugata and Toyota Dealers Association president Rene So, Matito received the Best in Engine System award, one of only four graduates recognized for outstanding achievements.

“The recognition will be a very big advantage,” he told the Inquirer. “Even if I had to commute daily from GMA to Santa Rosa for two years, the sacrifice was worth it and I enjoyed the training.”

“But we provide the best facilities and venues,” Alegada said. Training materials included dummy cars and tests were hands-on. Students underwent nearly a year’s training in the field.

Alegada said, “We also added aspects of Toyota culture to make the training more practical and relevant. The curriculum teaches the ‘Toyota Way,’ which calls for continuous improvement and respect for people.”

The “Toyota Way” is the same in any Toyota facility around the world, Alegada said.

Additions to the program were approved by Tesda, represented by Irene Isaac, deputy director general for policies and planning, who was guest speaker.

All 110 TMP graduates had jobs waiting for them. Most will be absorbed by local dealers while 11 are going abroad. Others plan to put up their own businesses or work at TMP’s Santa Rosa economic zone.

Going to work at a dealership is 28-year-old Carmeline Ewican of Santa Rosa, recipient of the leadership award.

“I was an IT (Information Technology) student in Silang (Cavite) but had to stop, (then I worked as a) caregiver in Singapore,” she said. “My aunt told me that Toyota was opening a school. I took the exam, passed and enrolled.”

From people to cars

Ewican, one of 10 women graduates, said there were some similarities between her course and caregiving as both “had to do with catering to needs. This time, I am taking care of cars.”

She was initially intimidated to be in a man’s world but she noticed that men listened to women more. That honed her into becoming a leader.

John Clifford Asis, said the school’s facilities and support ensured that students would stand out in skills competitions. The 20-year-old was recognized during the graduation rites for topping a recent regional Tesda competition in automotive technology.

“The curriculum gives you a competitive advantage,” said Asis, a resident of Dasmariñas, Cavite. “Aside from training in dealerships, they train you with the facilities. Before competition day, I underwent a 23-day training.”

Two years ago, he was torn between studying Automotive Technology in another school and waiting months for TMP Tech, where his father now teaches, to open.

“I had to wait four months but it was worth it,” he said. He will be employed at TMP’s Santa Rosa economic zone.

At the top of the class was 36-year-old mechanical engineer Melvin Lunar who, on graduation day, marched with his wife and the eldest of his four children. Lunar received the most outstanding graduate citation plus three other special awards.

He read about TMP Tech in a newspaper and thought the program would make his knowledge come full-circle. His college degree was theoretical and the short course would make it operational, he said.

“I was self-employed two years ago, but I thought this opportunity would help me earn more for my family, (my) ultimate goal, ” he said.

Lunar had to commute every day from his Pasay City residence and had to be on time for the first class at 8:30 a.m. Going home at 5 p.m. meant being stuck in traffic for hours.

He has received a job offer from the Bonifacio Global City dealership of Lexus, the luxury line of TMP.

“Schools are not the same. Some schools are better equipped to provide for our needs,” said Alegada. “What we’re doing is making sure our graduates … are ready to go.”

TMP Tech is not yet at its peak, Alegada said. “We have two rounds of intake every year, and, by and large, we’re still growing. We definitely want to improve.”

Alegada said, “A significant percentage [of our students] is female. We have professionals, engineers, graduates of four-year courses… They come from all walks of life, some are already married.”

Students are mostly from the National Capital Region and Calabarzon (Cavite, Laguna, Batangas, Rizal and Quezon) but the school hopes to attract students from all over the country.

TMP Tech has a scholarship program exclusively for students from southern Philippines, through GT-Metro Foundation. Dealers also sponsor some students, while others are on a study-now-pay-later scheme.

TMP Tech is forging employment partnerships with firms in the Americas and Africa, plus countries like India, Japan and New Zealand. It is fine-tuning its courses for the K-12 (Kindergarten to Grade 12) curriculum that will provide technical-vocational training in senior high school.

Alegada said, “[I hope] they will carry the attitude, the mind of a Toyota professional and that they will make us proud, wherever they end up.”