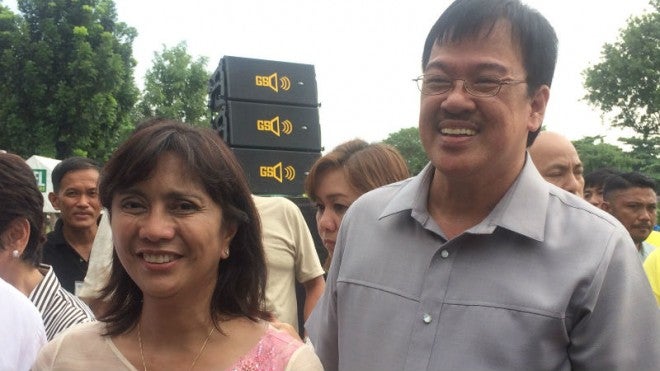 Camarines Sur Rep. Leni Robredo thought she was reunited with her late husband Jesse in a memorial service for police officers in Marikina City yesterday.

The congresswoman, who was the guest of honor in Marikina’s 28th Police Memorial Day, was “surprised” when a man in a gray polo shirt and black pants was introduced to her by Vice Mayor Jose Fabian Cadiz.

The man had a striking resemblance to her husband, former Interior Secretary Jesse Robredo, who died in a plane crash on Aug. 18, 2012.

His name is Elmer Uy, a 56-year-old dental technician and he is from Barangay (village) Parang, Marikina City. The late Robredo was from Naga City, Camarines Sur province.

At first glance, Uy can easily be mistaken for the late interior secretary—he has the same hair style, chinky eyes and mustache as the late Robredo had. He even sports a similarly shaped spectacle that the late secretary used.

“When I saw him, I thought my husband came back to life,” Robredo told reporters.

However, there was one thing that made the lawmaker realize Uy was just a look-alike: Uy was wearing shoes—instead of slippers that the late Robredo loved to wear.

“He’s better dressed than my husband,” Robredo quipped, drawing laughter from people around her. “(Jesse) always wore slippers. That’s why I’m sure it’s not him.”

After Jesse’s death, the type of participatory leadership he championed as Naga mayor became known as “tsinelas leadership,” for he was often seen in public wearing slippers.

Cadiz invited Uy to Sunday’s event honoring the city’s 115 policemen who died in the line of duty three years after Uy, a father of two, walked into his office to introduce himself. Cadiz recalled Uy went to his office after Jesse’s death “to condole” with him.

“He knew I was close to Jesse … . He’s proud of himself (because) someone famous looks like him,” Cadiz, a Bicolano like the Robredos, told the Inquirer.

Cadiz said he was “taken aback” by their first meeting in 2012 because he “remembered Jesse” in Uy.

Uy, who learned of his resemblance to Jesse when then Marikina Mayor Bayani Fernando pointed it out to him in 2001, said he wanted to meet Robredo so he could have his photo taken with her—and the lawmaker obliged.

Uy said he believed Robredo would help the country if she ran for the country’s second-highest seat and he would campaign for her.

Robredo, a first-term member of the House of Representatives, is reportedly being considered by the Liberal Party (LP) to run with its standard-bearer, resigned Interior Secretary Mar Roxas.

The lawmaker said there had not been any formal talks for her to run for Vice President.

“(The vice presidency) is not an easy post … . (Running for it) needs to be studied long and hard,” Robredo said.

She reiterated that she was open to possibly running for the Senate, depending on the surveys. “I don’t want to push through if there’s no (chance),” she said.

Recent reports said that while Robredo’s three daughters supported their mother seeking reelection as representative, they were against her running for a national post.

“It’s not easy for them to agree because they know we don’t have the resources to launch a national campaign. That’s what bothers them,” Robredo said.

Before she could answer what she thought would make her daughters reconsider their position should the LP pick her to run for Vice President, Marikina Rep. Miro Quimbo, a fellow LP member, butted in and said: “We’ll talk to them.”

In her speech, Robredo recalled that before her husband died, he was busy writing a thank-you letter to each of the country’s 150,000 policemen expressing gratitude for the improvement of the police’s trust rating.

The lawmaker said that should she run for the Senate, improving the police organization would be part of her campaign.