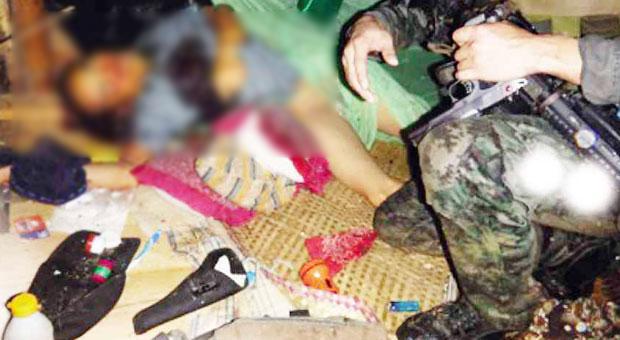 If he was, was the execution the “alternative truth” to the Mamasapano clash that President Aquino said the government was investigating?

“Marwan was already dead when the SAF arrived in his hut. The scenario we saw was the attack [by the SAF] was just a drama,” the source said in an interview.

“It was really his [Marwan’s] security [aide] who killed him,” the source said, requesting anonymity because of the sensitivity of the matter.

The source said that the MILF’s own investigation showed that the firefight in Barangay (village) Pembalkan, Mamasapano, where Marwan was found, was between the 84th Seaborne unit of the SAF and the group of Marwan’s Filipino aide, Basit Usman.

“Basit Usman and his men were alerted by the gunshots from Marwan’s hut and that triggered the firefight,” the source said.

Other Inquirer sources, quoting unconfirmed reports, said one of Marwan’s aides was killed in the firefight while another was able to escape.

“If you have read the report, the truth is there and for us that is the truth, not the alternative truth. I don’t want to sound political, but the report speaks for itself,” Iqbal said.

“During the ocular inspection, the Commission found that there were very few bullet holes on the wall of the hut where Marwan was found and killed. The trajectory of the bullets also indicate that the fatal shot did not come from the shots fired outside the house as the bullet holes are roughly [46 centimeters] above the floor. If the shots were fired while Marwan was lying down, he could not have been hit while if he was standing and engaged the elements of the SAF in a firefight, the injuries sustained should have been at his lower body and not on the chest.”

The report noted: “There are also no bullet holes on the floor of the hut. In all likelihood, the fatal shot must have been fired at close range and while Marwan was lying on the floor.”

It also said that Marwan’s hut, which has a floor area of 2.4 by 4 meters, was only 119 meters away from the hut of Usman.

That Marwan was executed by his aides, who likely had become government assets, and was not killed in an exchange of fire with SAF commandos would drastically change the story in the report of Director Getulio Napeñas, the then SAF commander, on what happened in Mamasapano.

It would also raise the question of whether the 55th SAC, the back-up force that suffered the heaviest casualties, should have even been in Barangay Tukanalipao, which was 3 kilometers away from Barangay Pembalkan.

Despite the deaths of 44 of his men, Napeñas described the police counterterrorism operation as a success because they were able to take down Marwan.

The US government had offered a $5-million reward for the capture of Marwan and $1 million for Usman.

Last Tuesday, President Aquino disclosed at the Meet the Inquirer Multimedia forum that there was an emerging “alternative truth” to the Mamasapano debacle.

Aquino said the photograph of Marwan lying dead in the hut “posed many questions.”

“That is what we want to resolve,” he had said.

The photo, contributed by a source to Inquirer columnist Mon Tulfo, was published by the Inquirer on Jan. 30.

Aquino did not give details, saying an investigation was going on and that the investigators were having difficulty finding witnesses.

The photo published by the Inquirer showed Marwan lying half-naked, with a pool of blood under his head, indicating that he might have been shot from behind. A clean chest shot also left him bloodied. His body appeared not to bear large bullet wounds.

Various Inquirer sources noted that this was not how someone would look like if he was felled by bullets from high-powered firearms.

SAF survivors said Marwan was awakened when members of the strike force entered his hut. He fired on the commandos, who fired back, killing him.

They said one officer took pictures of the slain Marwan and another cut a finger from the right hand of the dead terrorist for DNA tests.

The gunfire roused Marwan’s followers who lived nearby, the survivors said, and the commandos fought their way out of the hut and the village.

“What [the investigators] presented is the result of actual investigation on the ground. What we presented is a strong lead to ferret out the truth. We wanted to know the truth like everyone else,” Iqbal said.

“Intense fighting occurred in an area about 927 meters from the hut where Marwan was found and killed,” the report said.

“Tambako was the one who coddled Usman and Marwan. He should know something,” the source said.

A military officer told the Inquirer that investigating how Marwan died would lead to the truth about how the SAF Mamasapano operation was “handled, controlled and mismanaged in the end.”

“They lied about what really happened, how they killed Marwan. They lied to the President, to the people and to the families of the 44 SAF officers who died in the operation,” the officer said.

“It is now difficult to find out what really happened, because there is no one to blame for the deaths of the SAF 44 but their commanders who deployed them for a poorly planned mission. When it backfired, they blamed everyone but themselves,” the officer said.—Nikko Dizon and Arlyn de la Cruz, Correspondent at large