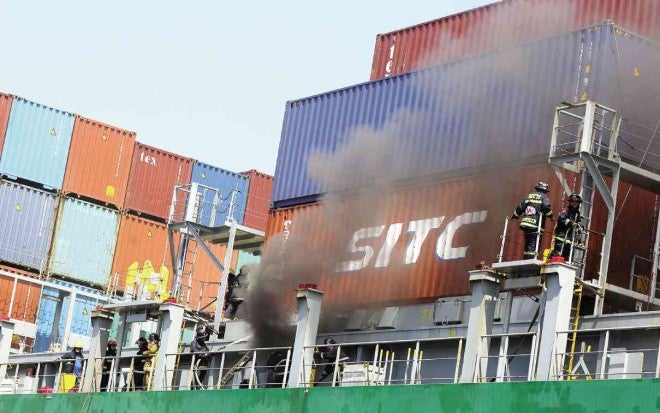 SHIP ON FIRE Firefighters battle a fire aboard the container ship MV Cape Moreton at the Manila International Container Terminal in Tondo, Manila, on Saturday. It took nine hours to put out the fire, which reportedly broke out after an explosion in the vessel’s cargo hold. No one was reported injured. MARIANNE BERMUDEZ

A CARGO ship with a Russian crew caught fire while docked at the Manila International Container Terminal in Tondo, Manila, on Saturday.

The PCG said around 20 fire trucks of the Bureau of Fire Protection (BFP) were sent to put out the flames, with some responders also using tugboats to approach the vessel. BFP personnel boarded the vessel and assisted the ship’s crew.

The fire reached the fourth alarm and was declared out at 5:37 p.m., according to FO2

According to an initial investigation by SFO4 John Joseph Jaligue, there was explosion inside the ship, which is manned by a Russian crew.

Cruz said it took almost nine hours to stop the fire as responders were unable to immediately penetrate the lower deck, being unfamiliar with the ship. They were even asked by the crew to show IDs first before they could get inside, he added.

The incident also showed that local firefighters were still lacking the proper equipment to deal with fires on ships, like those used by the Navy, Cruz noted.

The cause of the fire and the extent of the damage had yet to be determined as local officials were not being allowed to open the affected cargo at press time, he said.

The fire reportedly started at the cargo hold where containers loaded with sodium hydroxide were being kept, according to the PCG report.

The vessel arrived in the country around 7 p.m. on Friday. Tina G. Santos and Jodee Agoncillo