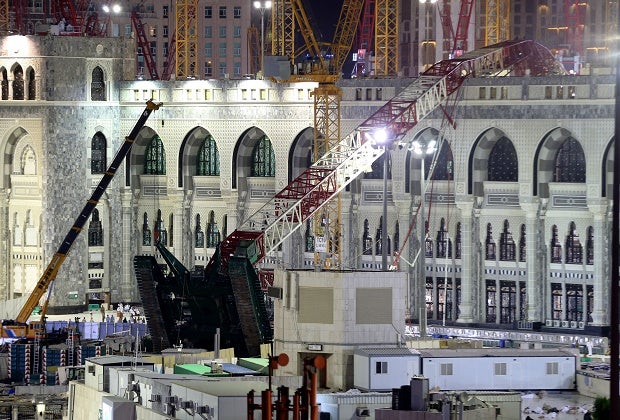 A towering construction crane, center, is seen collapsed over the Grand Mosque, in Mecca, Saudi Arabia, early Saturday morning, Sept. 12, 2015. The towering construction crane toppled over on Friday during a violent rainstorm in the Saudi city of Mecca, Islam’s holiest site, crashing into the Grand Mosque, ahead of the start of the annual hajj pilgrimage later this month. AP

RIYADH, Saudi Arabia — The head of Saudi Arabia’s civil defense directorate says high winds caused a massive crane to topple over and smash into Mecca’s Grand Mosque, killing at least 107 people ahead of the start of the annual hajj pilgrimage.

READ: Crane collapse kills 107 at Mecca’s Grand Mosque ahead of hajj | DFA: No reports yet of Filipino casualties in Mecca crane crash

Director General Suleiman bin Abdullah al-Amro told satellite broadcaster Al-Arabiya on Saturday that unusually powerful winds in the area also tore down trees and signs as a storm whipped through the area.

He denied reports that lightning brought down the red-and-white crane or that some of those killed died in a stampede.

The civil defense directorate says 238 people were injured in the accident late Friday afternoon at the mosque, which houses the cube-shaped Kaaba and is ringed by several cranes engaged in ongoing construction work to expand the site.