JOY for Inquirer reporter, 2 others 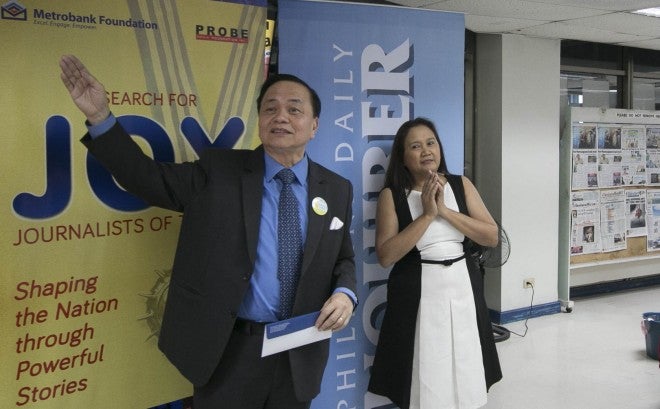 ANSWERED PRAYER As Metrobank Foundation president Chito Sobrepeña prepares to make an
important annoucement at the INQUIRER office on Wednesday, reporter Nancy Carvajal seems to be praying for good news. A few minutes later, she got it. Carvajal was named Metrobank Foundation’s Journalist of the Year, along with Marites Vitug of Rappler and Howie Severino of GMANetwork. In June this year, Carvajal was also named Journalist of the Year by the Society of Publishers in Asia, for her series on the pork barrel scam. ALEXIS CORPUZ

For the second time this year, Inquirer senior reporter Nancy Calauor-Carvajal, who broke the story on the pork barrel scam allegedly masterminded by businesswoman Janet Lim-Napoles and which involved several lawmakers, received recognition as an outstanding journalist.

Carvajal, named Journalist of the Year by the Society of Publishers in Asia (Sopa) in June this year after besting other nominees from Time Magazine and the International New York Times, has again been named Journalist of the Year (JOY) by Metrobank Foundation, along with Marites Vitug, editor at large of Rappler, and Howie Severino, news anchor and vice president for professional development of GMA Network Inc.

The search for Journalist of the Year (JOY), held every two years by Metrobank Foundation Inc. (MBFI) and Probe Media Foundation (PMF), “honors Filipino journalists from print, television, radio and online media whose excellent stories have contributed to positive social change and their work influences and develops their audiences toward constructive growth.

“For the nobility of their work, and the hazards they face, journalists receive little recognition for their important contribution as bearers of truth. We uphold the indispensable role of journalists: shaping public opinion through accurate facts and engaging treatment, “said MBFI president Aniceto Sobrepeña.

Considered a career award, the search, with the theme, “Shaping the Nation through Powerful Stories,” had nominees submitting five stories each from their last 10 years as journalists. Their works are then judged by a screening committee based on the following criteria: skills and craftsmanship, relevance of content to the public and contribution to positive social change.

The Search for JOY follows the same tradition of MBFI in recognizing excellence among outstanding public servants with such awards as the Search for Outstanding Teachers (SOT); the Country’s Outstanding Police Officers in Service (COPS); The Outstanding Philippine Soldiers (TOPS), and the Metrobank Art & Design Excellence (MADE).

The three JOY winners will each receive P300,000 in cash and the Pamukaw medallion designed by Metrobank Foundation Prize for Achievement in Sculpture awardee Jun Vicaldo during the formal awarding ceremony on Oct. 22. They will also be conferred the title “Metrobank Foundation Fellows in Journalism,” which gives them the opportunity to share their expertise and experience in lectures conducted for identified audiences in Metro Manila and other regions of the country.

The JOY award is Carvajal’s latest after receiving similar recognition in the past. She was named Sopa finalist for Best Scoop in 2014 for her story on the Philippine coast guard shooting of a Taiwanese fisherman, and Journalist of the Year in 2014 by the CMFR, for the pork barrel scam exposé.

For its first edition in 2013, the JOY awardees were Jarius Bondoc of The Philippine Star, Malou Mangahas of Philippine Center for Investigative Journalism (PCIJ), and Jiggy Manicad of GMA Network.

Back in 2001, MBFI partnered with the Asian Institute for Journalism and Communication (AIJC) to conduct the Search for Outstanding Journalists (SOJ), with awardees Sheila S. Coronel (print), Jessica A. Soho (broadcast), and the late Armando J. Malay Sr. (Distinguished Leadership in Journalism).

MBFI was established in 1979 by Dr. George S. K. Ty, as the corporate social responsibility arm of the Metrobank Group. The foundation implements various programs in education, visual arts and healthcare, and remains equally responsive to emergency and relief operations in times of natural calamities in the Philippines and in Asia.

PMFI is a nonstock, nonprofit organization dedicated to improving the quality of media in the Philippines and in the Asia-Pacific region by training professionals and aspiring media practitioners. It was established in 1999 by its current president, Cheche Lazaro of Probe Productions, Inc. (PPI), a production company known for its crusade against corrupt, irresponsible and sensationalist journalism.