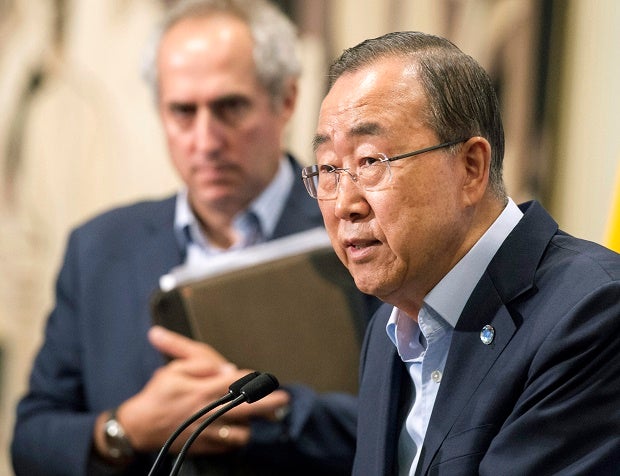 In this Aug. 12, 2015 file photo provided by the United Nations, UN Secretary General Ban Ki-moon addresses the media outside the Security Council chambers at UN headquarters, where he announced the firing of the head of the UN peacekeeping mission in the Central African Republic. Babacar Gaye, of Senegal, was terminated over the force’s handling of dozens of sexual and other misconduct allegations, including rape and killing, in the year and a half of its existence. Stretched for resources with a record number of peacekeepers in the field, the UN has hesitated to upset member states by announcing the countries whose troops or police are accused of wrongdoing, until now. Last week, Ban announced his intention to do so. AP FILE PHOTO

UNITED NATIONS — The UN chief is taking aim at sexual abuse by peacekeepers, calling it “one of my greatest disappointments” and saying he will repatriate the troops of countries that don’t act on allegations. The UN has already started to suspend payments to countries when allegations are credible.

Ban Ki-moon’s statements are in response to the first comprehensive assessment of peacekeeping in 15 years and largely agree with a high-level panel’s suggestions for a major overhaul. The UN has more than 105,000 troops and police in 16 missions in some of the world’s most dangerous places. Member states contribute the personnel and receive monthly payments in return.

The report with Ban’s response was intended for public release Friday, but The Associated Press found it on a UN website Thursday.

It comes as President Barack Obama prepares to host a major UN meeting later this month aimed at drawing European and other developed countries back to peacekeeping with their funding and skills in intelligence-gathering, engineering, air support and medical care.

Though more peacekeepers have been deployed than ever before, “proliferation of conflict is outpacing our efforts,” Ban wrote. It can take several months after a mission is authorized for peacekeepers to arrive. Not everyone comes properly equipped and trained. There is no current system for vetting peacekeepers for past abuses. Peacekeepers have been shown to rarely use force to protect civilians.

This summer’s high-profile series of allegations of sexual abuse by peacekeepers, including of minors, in Central African Republic has caused another layer of concern as the UN tries to reshape a peacekeeping system that costs about $8.2 billion this year alone.

“I will repatriate contingents where there is a demonstrated pattern of abuse or non-response to allegations of misconduct,” Ban’s report says.

The UN chief announces several other changes around the issue: From now on, countries that are repeatedly listed in his annual reports on children and armed conflict, and on conflict-related sexual violence, will not be allowed to participate in peacekeeping.

Member states have the sole responsibility to prosecute their troops, but a UN investigative report released this summer showed that countries can take little action. “I urge member states to hold court-martials in host countries as a measure of visible accountability,” Ban wrote.

The UN chief again declared his intention to start naming the countries whose peacekeepers have been accused of sexual misconduct — but after consulting with member states on how to do so.

Reflecting that pressure from member states, a peacekeeping spokesman on Thursday said the UN was not making public the names of countries whose payments have been suspended over credible allegations of sexual misconduct by their troops. The spokesman said that so far, member states have been informed in 14 cases of the decision to suspend payments.

The issue of sexual misconduct also should be on the agenda when the UN Security Council meets with troop and police contributing countries, Ban wrote.

Addressing another persistent issue, Ban says that when a mission has an explicit mandate to protect civilians, uniformed personnel must do it, even by using force if necessary.

Troops that refuse to follow orders can now be repatriated. “Uniformed personnel must comply with orders to prevent, deter and protect civilians against attacks,” Ban wrote. If not, he will investigate and inform the Security Council and member states.

Finally, in an effort to speed up the UN’s response to deadly crises, peacekeeping officials by early next year will finalize a plan to establish a “fully functional” rapid-response headquarters that can be on the ground two to three months after the Security Council approves a new mission. Standby units for early deployment are also being planned.

Read Next
Pacific leaders agree to disagree on climate change
EDITORS' PICK
What to watch out for when selecting a video surveillance solution
Heads may roll at BOC, says Palace if sugar smugglers are allowed to use recycled import permits
vivo brings to the Philippines a powerful smartphone with a slimmer body, the vivo Y02s for only PHP 6,499
Palace: Biggest supermarkets in PH commit to sell sugar at P70 per kilo
DOH reports increase in daily COVID-19 deaths, mostly unvaxxed
House energy committee chair Arroyo bats for cheap electricity
MOST READ
DepEd to give teachers P5K cash allowance within first week of classes
Alyssa Valdez to miss Creamline’s AVC Cup campaign
Jordan Clarkson arrives in Manila to bolster Gilas Pilipinas
DOJ indicts bank officer in $2.1 billion Wirecard fiasco
Don't miss out on the latest news and information.