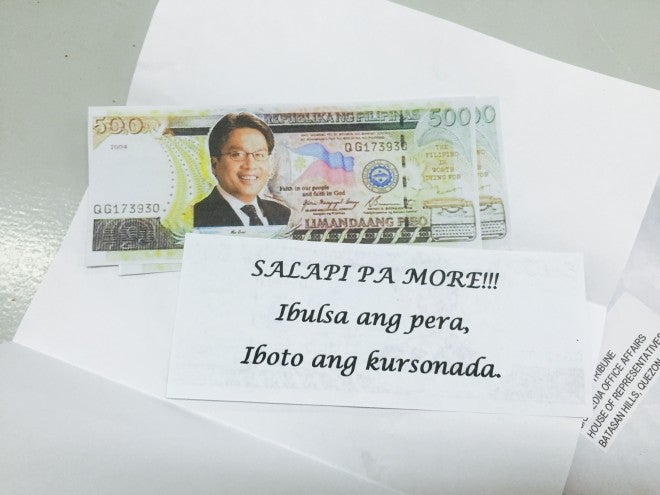 The envelopes, which were delivered through postal mail but whose sender was not disclosed, were addressed to the lower chamber’s media office in Batasan Hills, Quezon City.

Alluding to bribery and vote-buying, the text “Salapi pa more! Ibulsa ang pera, iboto ang kursonada” was printed at the back portion of the fake money.

The circulation of fake bills with Roxas’ face coincided with the House committee hearing on the proposed 2016 budget of the Office of the Vice President.

“It is difficult to confirm or deny speculations. Instead of circulating black propaganda against each other, it would be best for candidates to highlight what they have accomplished or what they can do to address pressing problems like the horrendous traffic in Metro Manila, the killing of lumad in Mindanao, the congestion at the airports, improving public transportation, etc.,” Quicho said in a text message.

“Voters are sick and tired of black propaganda of candidates against each other. These do not redound to the benefits of the public and voters. Masakit na sa tenga ang mga inanities nila … At sayang ang mga punong pinutol para lang magprint ng black prop,” he added.

An LP solon, meanwhile, said the move was an “absurd fabrication” and a “new low” to sabotage Roxas’ presidential bid in 2016.

“While Secretary Mar has often been the target of unfair attacks from those opposed to daang matuwid, this latest attempt to malign his name marks a new low,” said Akbayan party-list Rep. Barry Gutierrez.

“Obviously, it is a desperate ploy to attempt to tarnish the good name of Mar Roxas, a man who, in over two decades of public service, has not once been linked to even the barest hint of impropriety or corruption,” Gutierrez added.