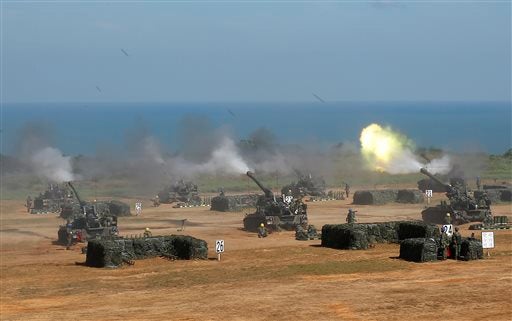 Taiwan’s military fire artillery from M110A2 self-propelled Howitzers during the annual Han Kuang exercises in Hsinchu, north eastern Taiwan, Thursday, Sept. 10, 2015. Taiwan’s military is simulating attacks by political rival China this week, despite an overall warming of ties, after Beijing staged what appeared to be a strike against the presidential office in Taipei. (AP Photo/Wally Santana)

HSINCHU, Taiwan — Taiwan’s military blasted shells into the ocean Thursday, one in a series of exercises this week to simulate attacks by political rival China after Beijing staged what appeared to be a mock strike against the presidential office in Taipei.

The exercises, larger this year than in the past, follow televised images from China on July 22 depicting a staged ground troop attack on a red tower and attached low-rises that resembled Taiwan’s presidential compound.

China is Taiwan’s only major potential military threat, though the two sides have shelved political differences since 2008. They are separated by an ocean strait that is 160 km (100 miles) across at its narrowest point.

“Our most crucial goal is to simulate safeguarding against a possible attack from mainland China, whether on Taiwan itself, an outlying island post, our marine military space or our airspace,” deputy Defense Ministry spokesman Chen Chung-chi said.

China’s military, meanwhile, on Thursday announced three days of its own live-firing exercises in the Taiwan Strait, part of a program of more realistic training scenarios involving integrated units from the navy, air force and ground troops.

It was not clear if the exercises starting Friday were related to Taiwan’s drills and China’s Defense Ministry did not immediately respond to faxed questions seeking comment. Ministry spokesman consistently respond to such queries by saying that exercises are part of scheduled routine training and not directed at any third parties.

From a hillside in northern Taiwan about 1 kilometer (half a mile) into the ocean strait facing China, Taiwanese army troops fired howitzer shells, leaving a haze of smoke on land. President Ma Ying-jeou wore a helmet and flak jacket to the staging area.

Taiwan has shifted to designing its own hardware since 2010 as China mounted pressure on the United States, the island’s chief overseas supplier, to stop arms sales.

China has claimed sovereignty over Taiwan since the 1940s, when the Communists routed the Nationalists in a civil war. The Nationalists rebased in Taiwan, which China says must eventually be unified with the mainland, although it has not openly threatened Taiwan since 2005.

The two sides have set aside their political dispute since 2008 to open a dialogue that has led to more than 20 agreements on trade, transit and investment. But the deals have failed to help Beijing’s hopes of endearing Taiwan’s public to the idea of unification.

In early 2014, tens of thousands protested after they felt one of the agreements, a service trade liberalization agreement, was moving too quickly through parliament. About 70 percent of Taiwanese prefer today’s degree of autonomy from China, a government-conducted public opinion survey found late last year.

China’s military is the third most powerful in the world and Taiwan’s is No. 15, according to statistical database GlobalFirepower.com.

“The president reiterates that although Taiwan-mainland China relations are at their most stable in 66 years, we absolutely will not let national defense slack one single bit,” Ma’s office said in a statement Thursday.

Relations with China could go into a freeze after a new president takes office in Taipei in May. The Jan. 16 election frontrunner has proposed no mechanism for dialogue that China would accept. Current President Ma Ying-jeou must step down next year due to term limits.