‘I left office on Sept. 8; I got home on Sept. 9’
By: Jeannette I. Andrade, Kristine Felisse Mangunay, Maricar B. Brizuela, Ramon H. Royandoyan - @inquirerdotnet
Philippine Daily Inquirer / 01:11 AM September 10, 2015 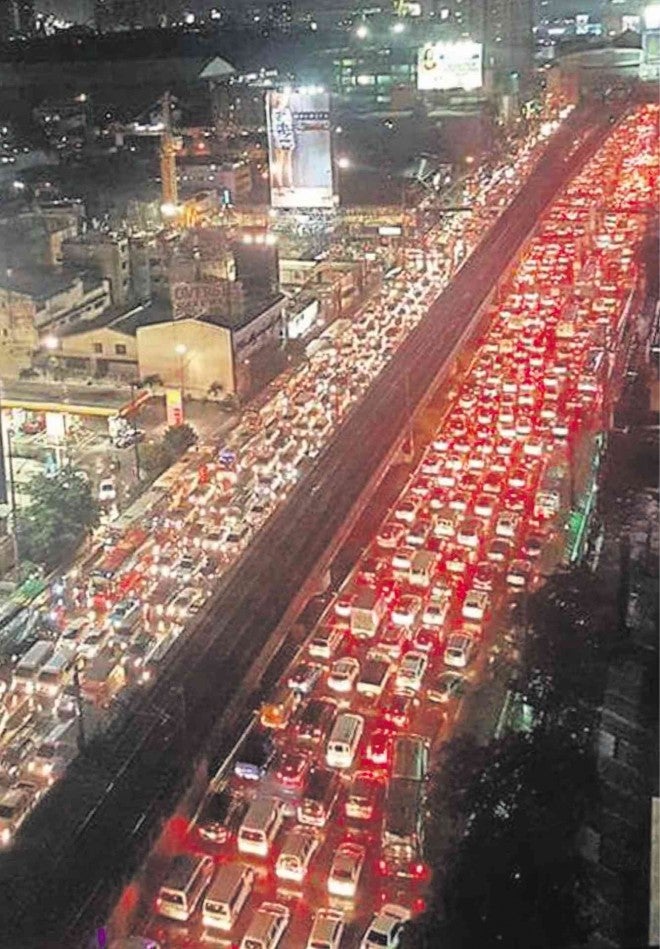 CHRISTMAS LIGHTS ON EDSA This photo that went viral on social media on Tuesday night was taken at 10:30 p.m. at the peak of the traffic jam that turned Edsa into a giant parking lot and stranded tens of thousands of tired, hungry and angry motorists and commuters. It was taken by Myk Josh Wierzbicki from the 18th floor of Paragon Condominium Plaza on Edsa corner Reliance Street with a Samsung S3 smartphone.

One commuter spent the first few hours of his birthday with strangers on a passenger bus, rather than with his loved ones at home, staying on the road from Sept. 8 to Sept. 9.

He was one of the thousands of commuters who spent the first hours of Sept. 9 in cars, taxis and jeepneys and on buses or, worse, on sidewalks waiting for a ride because of the horrendous traffic on Edsa and other major roads of Metro Manila on Tuesday night.

The culprit: heavy flooding due to a sudden thunderstorm and the absence of traffic enforcers.

The “carmageddon” in Metro Manila prompted other tired, hungry and angry commuters to express their frustration and anger on social media.

“I left the office on Sept 8, I arrived home on Sept. 9,” best described the feeling of netizens.

Because of the gridlock, Jean Avila later greeted a fellow passenger happy birthday on social media with a mix of Pinoy humor and irony.

“Long live to those who grew roots on Edsa! Long live to those who caught the rays of the sun on East Avenue! And most importantly, long live to my co-passenger who was stuck on a bus until he celebrated his birthday because of the standstill traffic from Litex to Regalado [both in Quezon City]. Happy birthday to you, stranger! Mabuhay!” Avila said in a Facebook post.

Even Ninoy Aquino International Airport (Naia), the last place supposed to be flooded, was under water, delaying domestic and international flights. Floodwater was waist-level on the tarmac.

Naia sources said the Parañaque River overflow would not have flooded the tarmac had a portion of an open creek along Andrews Avenue not been reclaimed and paved for a road-widening project.

The weather bureau recorded 61 milliliters per hour from

5 p.m. to 8 p.m. on Tuesday, the heaviest rainfall it recorded so far this month in Metro Manila.

Benison Estareja, weather specialist at the Philippine Atmospheric, Geophysical and Astronomical Services Administration (Pagasa), said the “intense rainfall” was not new, especially during this time of the year.

Pagasa Science Garden in Quezon City recorded 78.8 ml for three hours from 6 p.m. to 9 p.m., the amount considered torrential rains. The rains were most intense from 7 p.m. to 8 p.m. when 40 ml were recorded in that hour.

The intense rainfall, however, was limited to certain parts of Metro Manila.

An Inquirer editor, who took Ayala Avenue in Makati instead of the flooded South Luzon Expressway (SLEx) at the Buendia area to avoid flooded streets, was surprised to find that the section of the avenue at Rustan’s going to Edsa was dry.

He was also surprised to find that the Edsa-Ayala intersection was clogged with vehicles as no one was directing traffic, and motorists, when left to their own devices, tried to get his or her way. It took him three hours and 45 minutes to get home to Muntinlupa City, a trip that usually takes about 50 minutes.

The drop-dead traffic in Makati was mostly due to the flooding of major streets, said the Makati Public Safety Assistance (Mapsa) department.

Mapsa officer in charge Elmer Cabrera said the traffic was manageable around 4 to 5 p.m. But when the rain poured around 7 p.m., he said floodwaters rose in roads such as Chino Roces Avenue, Buendia, Mayapis, Malugay, Vito Cruz Extension, Washington and Yakal. These became impassable to light vehicles, causing standstill traffic in most areas.

“Most motorists with small cars stopped along the roads where there were floods, blocking intersections and other vehicles,” Cabrera said.

Sen. Francis Escudero recalled that he was stuck on the northbound lane of Edsa for three hours, and one hour of that was spent in front of the Megamall area.

Escudero said that during that time, he did not see one member of the Metropolitan Manila Development Authority (MMDA) or the Highway Patrol Group (HPG) on the thoroughfare.

Sixty-four-year-old Armando Carlos, who had errands to run in Makati and was expecting to reach his Las Piñas City home in an hour or so from there, ended up stuck on Edsa southbound around 9 p.m.

As soon as he got home he swore never again to leave his house and go to places “far away” when it rains “even just a bit.”

“That’s what I said to myself. My gosh, what happened to me was horrible. Can you imagine? I got home past 12 midnight already,” Carlos said.

Around midnight, the Makati Central Business District was still at a complete standstill, especially along Makati Avenue, Ayala Avenue and Buendia.

Carlos said during that time, traffic was at a virtual standstill from Edsa-Ayala to Edsa-Magallanes.

When he got to Macapagal Avenue “several hours later,” he said traffic was again at a standstill. “It’s like everywhere you looked, everywhere you went, it was just a sea of vehicles.”

Mike Moreno, who goes to school in Makati, reported seeing around 30 people walking in a single file on the Edsa-Magallanes flyover going to Taft Avenue past 10 p.m.

“Apparently, they became impatient because the traffic in the area was just horrible,” said Moreno, who was in a public shuttle on Edsa on his way home to Las Piñas.

Moreno said some impatient drivers, who were fed up with the “standstill,” would honk their horns “from time to time.”

He said inside the shuttle, some passengers, apparently aware of the long hours they would have to spend seated, had taken to sleeping or watching a movie on their gadgets.

All in all, Moreno said his trip to Las Piñas, which usually lasts an hour or “even less than an hour,” lasted almost four hours.

“This was the worst traffic I experienced in the years I have used the same route,” Moreno said.

On Macapagal Avenue, where it was “raining cats and dogs” around 9 p.m., an employee, who works in the Senate and refused to be identified, reported seeing people walking on the sides of the road in the area.

Woman in a pothole

She said she even saw a woman fall into what appeared to be an open pothole as she was crossing from one point of Macapagal Avenue to the other.

“There was floodwater, maybe ankle-deep. When she got to the other end near Shakey’s, if before I could see her entire body from where I was, I suddenly saw only half of her body,” she said, noting that even the woman’s umbrella was turned upside down.

She said the woman just stood up and walked away, as she fixed her umbrella.

The Senate employee said what was supposed to be a less than an hour trip to Las Piñas at that time took almost two hours.

For Moreno, the absence of a “flood management system” could be blamed for the ordeal commuters had to go through on Tuesday night.

He said upon reaching the SLEx, he saw floodwaters in front of Asia Pacific College in Magallanes that caused vehicles passing there to stop.

Too much to handle

“Traffic authorities can only do so much. There are things that are beyond their control. If it’s flooded in an area, cars will have to stop, so most of the time that results in traffic,” he said.

Mapsa’s Cabrera said more than 100 traffic enforcers were deployed to help manage traffic and allow bigger vehicles to go through flooded roads while the small ones were allowed to park on the side streets.

“Some were able to pass but there were still other motorists who did not follow and just parked their cars along the road,” he said.

Asked if the flood control measures of the city worked on Tuesday, Cabrera said these were in place but the volume of the rain was too much to handle.

The MMDA said it had prepositioned flood control teams to the flooded areas in case of another heavy downpour.

Asked why these were not in place on Tuesday night, he blamed the rainfall volume, saying that even though drainages were cleared, the volume was just too much.

“Metro Manila traffic is a horrible cancer-causing element of stress because there is just nothing to hope,” posted social humorist @krizzy_kalerqui.

It was easy to tell where the traffic was worst by the hashtags that trended at the height of the flood—#Edsa #traffic #Magallanes #Baclaran #Buendia and #Fairview.

For many netizens, the heavy rains warranted a last-minute change of plans.

“A sea of red lights. Halalalalalalala. Ano to? It’s 12:22am,” actress Anne Curtis said on Twitter.

Netizen Pristine offered a moment of reflection for everybody. “Sinong nagsabing mahirap ang Pilipinas?! Daming kotse niyan o. #EDSA #traffic #sarcastic (Whoever said the Philippines is poor? Look at those cars),” he said.

Netizen Jayvee Ruru Elizalde voiced what was on the minds of commuters on Tuesday night.

For ijae, he witnessed Edsa transform into “the biggest parking lot in the world.”

“3 hours and counting. Hell on earth! #traffic #edsa,” said gino john, who was among those who braved the Edsa commute.

Where did HPG go wrong on a rainy Tuesday night?