Traffic jams hound gov’t despite efforts to the max 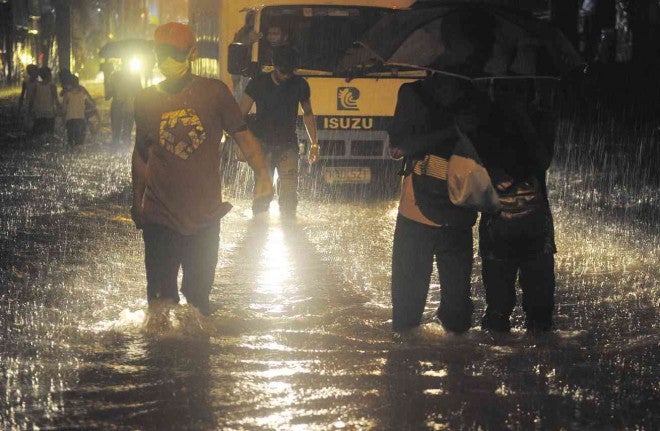 WATERY WALK Commuters choose to wade through floodwaters rather than be trapped in buses and other public transport immobilized by fast-rising waters after a sudden heavy downpour in suburban Manila on Tuesday night. Public officials blamed the high tide and the heavy rains for the floods, but stranded office workers and motorists pointed to road construction works, clogged drainage and too many vehicles on the road for the standstill. AFP

Traffic jams, whether caused by man or nature, seem to hound the Aquino administration despite stepped-up measures to ease the gridlock on Metro Manila’s roads.

On Wednesday, Malacañang sought the understanding of thousands of commuters and motorists who were stranded for hours because of the thunderstorm that resulted in flash floods.

“Government’s efforts to improve the traffic flow along Edsa and major thoroughfares were greatly hindered (Tuesday) night by heavy rains and flash floods that were experienced during the rush hour of homeward-bound commuting,” Communications Secretary Herminio Coloma Jr. said in a statement.

“These slowed down the movement of vehicles and resulted in a gridlock in flooded areas with stalled vehicles. It was only at past 11 p.m. when the flash floods subsided and the normal flow of vehicles resumed,” he said.

“We understand the plight of many who were stranded and delayed considerably in reaching their homes and destinations and we seek their kind understanding,” said Coloma, who said he himself was stuck in the traffic jam.

Pagasa said more “isolated” thunderstorms in the afternoon or evening could be expected due to the intense heat during the day. It has recorded “slightly warmer” than usual temperatures around the country since last month and attributed this to the prevailing strong El Niño.

On Tuesday, the air temperature in Metro Manila peaked at 33.5 degrees Celsius—nearly 2 degrees higher than the normal maximum temperature of 31.6 degrees.

Due to the accumulated heat during the day, evaporated water forms clouds that burst into rains in the afternoon or evening when the clouds become heavy with water vapor.

Name of the game

Almendras acknowledged “the hard work and continuous efforts of the HPG and the MMDA for working together in order to address the traffic situation in Metro Manila.”

“The past two days are proof that the initial steps being taken to ease the traffic situation were effective, and government will continue to strive to improve our interaction and interoperability among concerned government agencies,” Almendras said.

“We continue to appeal to the public for their cooperation in following traffic rules and regulations that greatly impact traffic flow and management,” he added.

Almendras blamed overcapacity for the traffic mess. “Edsa was designed to hold 140,000 vehicles per day but now vehicle volume has reached more than 260,000 per day,” he added.

On Wednesday, the MMDA and the HPG towed three cars and a bus illegally parked on P. Tuazon, which now serves as an alternate route for 135 provincial buses coming from Edsa during rush hour.

In a press conference on Wednesday, Gunnacao said the 150 HPG troops deployed on Edsa on two eight-hour shifts were inadequate and that he had requested reinforcements. He said the Special Action Force was first to respond, fielding 20 personnel. Other regional PNP offices have offered additional manpower.

On Tuesday night, the HPG force proved insufficient to sort out the monster traffic jam caused by the downpour and flooding.

Gunnacao detailed an apparent mix-up the HPG had run into with some MMDA enforcers, who kept away from the six major choke points on Edsa given to the HPG and instead manned other Edsa intersections.

He said that Tolentino had told him the HPG would have operational control of some MMDA personnel.

“But that did not happen,” he said. The MMDA enforcers remained in their newly assigned intersections even though he needed them to reinforce his men.

“They insisted it was the HPG who should hold the choke point. I said the HPG can’t handle it alone, because we also deployed personnel to other intersections the MMDA was handling,” Gunnacao said.

He underscored the fact that the MMDA had 500 personnel on Edsa alone. “There’s a big difference. So that’s what I was requesting from the MMDA.”

The mix-up on personnel posts was cleared on Wednesday with the MMDA. “Starting tomorrow, there will be MMDA personnel along those chokepoints. They will take commands from me,” Gunnacao said.

He added that MMDA personnel who refused to report for duty or man their assigned posts could be charged with insubordination by MMDA officials.

No rift, only hiccups

Gunnacao clarified there was no rift between the MMDA and the HPG.

“It may not be a problem with the organization. It might be an individual problem. Maybe there are people there that don’t want to follow because they want to remain kings on Edsa.

They don’t want anyone else there,” he noted.

He said the worsened traffic situation due to flooding on Tuesday was “expected,” but admitted the HPG had not made plans for this yet because they also have yet to receive a requested list of flood-prone roads from the MMDA.

“My plan in requesting [the list] was for us to make alternate routes where cars can pass in case of flooding. I guess we were just ‘lucky’ last night. We found out for ourselves where the floods happened,” Gunnacao said.

He said the HPG was formulating plans for the alternate routes and that this should be ready for the next heavy downpour.

Gunnacao maintained that it was too early to pin down permanent solutions to Edsa’s problems, though a technical working group has made suggestions. “Day by day, we see the problems. Day by day, we make corrections. Day by day, it’s a different situation,” he said.—Nikko Dizon, Maricar B. Brizuela and Jaymee T. Gamil with Dona Z. Pazzibugan

Read Next
Flash floods trigger Metro Manila ‘carmageddon’
EDITORS' PICK
Ahead of ONE: Full Blast II, Mongkolpetch warns Elias Mahmoudi: ‘Watch out for my fists’
Synology NAS: A photo storage and multimedia server for your home
DILG takes over Cotabato town as all officials go on quarantine
Local gov’ts may start COVID-19 vaccination of poor residents using excess supply
Tighter curbs sought in provincial COVID-19 hot spots
Alex Eala wins Grand Slam on Independence Day: ‘I hope I made my contribution to the country’
MOST READ
‘Hindi pwedeng take 2,’ Sotto tells presidential, VP aspirants
Lacson: Kind-hearted Leni ‘in it to win’ presidency in 2022, but…
Calida’s ‘mental calisthenics’
NCR Plus remains under GCQ from June 16-30
Don't miss out on the latest news and information.