For making tough subjects ‘fun,’ these teachers are outstanding 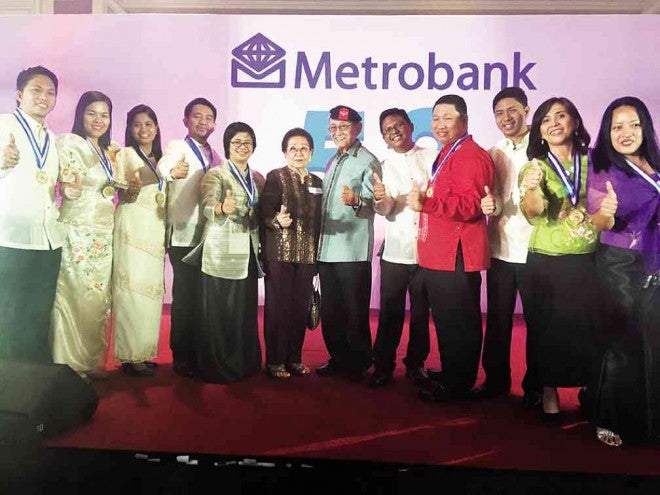 As Analyn V. Salvador-Amores of the University of the Philippines Baguio finished her discourse on the cultural mores of the Isinay in Nueva Vizcaya province, this writer asked, “Do you have their tattoos?” She nodded and showed the etching symbolizing her honorary adoption by the tribe.

Social anthropologist Salvador-Amores, in documenting the livelihood, education, health and culture of the Isinay, keeps their welfare foremost in her mind and heart.

She has been studying indigenous cultures in northern Luzon for 10 years, discussing her findings in her class and in conferences here and abroad. She gives the indigenous peoples a voice.

In 2013, to better understand what “indigenous education” entails, she led a team of researchers to survey groups in Sadanga, Mountain Province, the Gaddang in Paracelis and the Agta of Palanan in Isabela province. The findings were presented to the Department of Education (DepEd), which will hopefully consider them in crafting programs.

“Dialogues are carried out with mutual respect and tolerance of diverse opinions,” said Salvador-Amores, who hopes to help bridge misunderstandings in a diverse world.

Thomas Edison E. de la Cruz, despite his boyish demeanor, has taught at the University of Santo Tomas for 19 years. His presentation on the bacteria was not for the faint-hearted but his light touch made the subject enlightening.

De la Cruz, who has authored several international peer-reviewed articles, is an excellent researcher. But he said, “Our country needs scientists who are also educators.”

Salvador-Amores and De la Cruz were the college-level recipients of the 2015 Search for Outstanding Teachers award of Metrobank Foundation. The recent awarding ceremonies also honored four elementary school and four high school teachers, whose innovativeness can help inspire other mentors.

“I want my students to feel like they can always ask questions, no matter how silly…,” said Reyes, “and be able to express their opinions.”

Reyes is a leader during emergencies, like Mayon Volcano eruptions. In 2014, he received the Outstanding Science Teacher award from Southeast Asian Ministers of Education Organization.

Irene, the first college graduate in her family, not only teaches Science but also creates innovative models to help children understand abstract concepts. She has presented her moon phase simulator at the International Conference on Science and Math Education in Penang, Malaysia.

Irene teaches hands-on Science at Carmona Elementary School in Cavite province. She believes that teachers should have “a compassionate heart to accept pupils’ shortcomings and come up with interventions to bring out their best.”

Milagros C. Banan has been teaching languages for 28 years at Ernesto Rondon High School in Quezon City. She started as an English teacher and an adviser of the school paper.

She soon shifted to Mandarin Chinese, one of the most difficult languages to master and teach. Banan knew, because of China’s role on the world stage and ties with the Philippines, that teaching her students Chinese would expand their world view and help them navigate today’s world.

As president of the Special Program in Foreign Language of the Chinese Mandarin Teachers Association of the Philippines, Banan spearheads the annual National Festival of Talents to showcase the creativity and fluency in Mandarin Chinese of Filipino students.

In an era when Art classes have become an afterthought, Benjamin M. Castro of Francisco Benitez Elementary School in Manila encourages children to work with their own hands and use their imagination to turn dreams into reality.

For 15 years, Castro’s fun, interactive learning strategies have transformed his classroom into a creative playground, mini-museum and theater. Activities such as printmaking, jewelry recycling, illustration and photography inspire his pupils to appreciate the use and value of art in daily life.

Play has also been the cornerstone for 18 years of Amcy M. Esteban’s Special Education (SPED) class in Legarda Elementary School in Sampaloc, Manila. While a SPED teacher in a public school faces such challenges as large classes, minimal resources, lack of extracurricular support for students, etc., Esteban transformed her classroom into a safe, engaging and learner-centered environment where children can explore multiple intelligences.

She has partnered with business and civic groups to develop learning aids for her students.

Rejie F. Palmos also puts his students’ welfare above all. As guidance counselor of the integrated laboratory school of West Visayas State University in Iloilo City for 20 years, Palmos instills an appreciation for learning and respect for authority among young students, providing them the emotional tools to thrive in the academe.

Palmos developed the pupil handbook to inform students of their rights and responsibilities, and the student-teacher handbook to guide aspiring teachers on curriculum and deportment.

As coordinator for the school’s Center for Peace Education, he has institutionalized peace education across all levels and conducted research on conflict resolution. The center, with the DepEd and private schools, spearheaded an antibullying campaign.

Mathematics is anathema to many students but good Math teachers like Myrna B. Libutaque of Philippine Science High School-Western Visayas campus in Iloilo City are able to relate its principles to real life.

“Connecting Mathematics to realistic and intrinsically interesting situations ensures higher engagement among my student scholars,” said Libutaque, who, for 25 years, has used investigation and modeling rather than rote memorization.

Aiming to instill in her students a mathematical mindset, Libutaque focuses on problem- solving and proofs rather than speedy, meaningless computations. Her students have done well in competitions such as the Philippine Math Olympiad and the Metrobank-DepEd Math Teachers’ Challenge.

In the past, 60 students in a class at Palo National High School in Leyte province had to share four computers. Business teacher Ernani S. Fernandez Jr. did not let this deter learning. Instead of computers, he used television for his instructional materials. Soon his students were winning information technology (IT) competitions.

But after the school received 40 computers from donors, Supertyphoon “Yolanda” struck.

Fernandez dedicated himself to the effort to reestablish the school’s IT resources. He also conducted IT peer coaching and other training seminars in the region. Knowing that business now relies on software and hardware, he created a module on digitizing basic Accounting for high school students.

“I was inspired to be a teacher because of my teachers,” he said. “They were dedicated to giving us quality education.” Fernandez knows he can do no less.  Queena N. Lee-Chua, Contributor