BBC seeks to broadcast into N.Korea–source 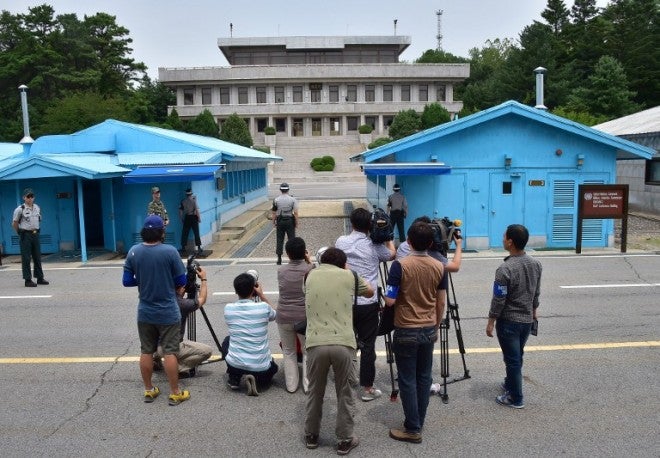 Cameramen take pictures of the North Korean side during a press tour to the truce village of Panmunjom in the demilitarized zone dividing the two Koreas on July 22. AFP

LONDON, United Kingdom—The BBC plans to launch a radio news service for broadcast into North Korea as part of an expansion of its World Service offering, a source told AFP on Saturday.

The state broadcaster also wants to offer new and expanded services to Russia, Africa, India and the Middle East, added the source close to the matter.

It could lead to the BBC launching a daily news program for North Korea, in a move that risks unsettling diplomatic relations between London and Pyongyang.

The BBC is said to be looking also at creating a satellite TV service for Russian speakers and is expected to seek extra public funding for the expansion.

“This is about Britain’s place in the world,” said a source at the BBC, ahead of a formal announcement on the broadcaster’s plans due Monday.

“Other news outlets are growing globally, and many do not share our traditions and values.”

The source added: “There should no longer be any no-go countries for the World Service—it is Britain’s impartial voice to the world.”

The BBC World Service reaches 210 million people a week on TV, radio and digital, according to the broadcaster.

Founded in 1932, the BBC World Service broadcasts around the globe in 29 languages, including English.