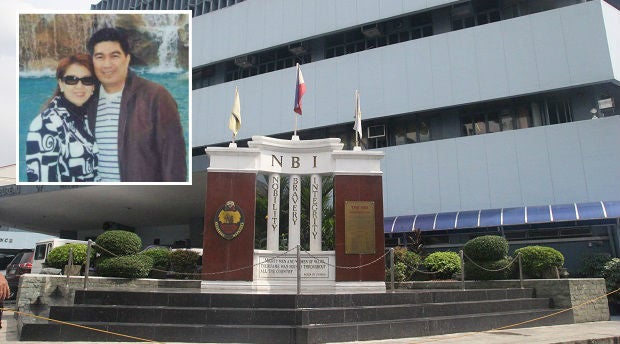 The National Bureau of Investigation is looking into the possibility that the ambush slaying of a whistle-blower’s husband, Chief Insp. Romeo Ricalde, in 2013 may be linked to the new P500-million pork barrel scam. Ricalde’s wife, Bernadette, who is a former staff member of San Jose del Monte, Bulacan, Rep. Arturo Robes (inset photo) said her murdered husband had a recording of his conversation with Robes’ wife, Florida, (also shown in inset photo), about the transactions of WorkPhil and Sagip-Buhay People Support Foundations, two NGOs that allegedly were involved in the diversion of the congressional PDAF to National Agribusiness Corp.

The wife of San Jose del Monte, Bulacan, Rep. Arturo Robes has denied allegations she has a hand in the ambush-slay of Chief Insp. Romeo Ricalde in 2013 which is being linked to the “pork barrel” scam.

“I categorically and vehemently deny any involvement in the death of the former police officer … I am God-fearing and never was a violent person; never in my life (has) my name (been) dragged this way into yet another unsolved murders in our country,” Florida Robes said on Friday.

Bernadette Ricalde, a former member of the staff of Representative Robes, said her husband Romeo had a recorded conversation with Florida about the transactions of WorkPhil and Sagip-Buhay People Support Foundations, two nongovernment organizations allegedly involved in the diversion of the congressional Priority Development Assistance Fund to National Agribusiness Corp.

But Florida said she had no memory of any conversation about the transactions on the said NGOs.

“Assuming but without admitting that such a recorded conversation had, at all, taken place, I can’t find at all any logical connection between, say, the Sagip Buhay Foundation, and … me staging or directing his ambush,” Florida said.

Florida said the slain police officer was introduced to her by his wife Bernadette prior to his ambush but added she could not longer recall what they talked about then.

She also said Romeo was assigned with the drug enforcement unit  prior to his death; as such, his work was to run after drug syndicates and not operators of fake NGOs.

“In the first place, I am not and never was an operator of any NGO, so (I can’t have) any motive to ‘silence’ him off, granting that there had been a shift in his police duty—from drugs to PDAF scandals,” Florida said.

“One thing is closest to truth, that in the course of his work, he has crossed paths with a drug syndicate who wants to silence him,” she added.

Bernadette, who has urged the National Bureau of Investigation to investigate further the circumstances surrounding her husband’s death, is among the four whistle-blowers who have executed an affidavit alleging that the PDAF allocations of at least 20 incumbent and former lawmakers worth a total of P500 million have been diverted to 15 bogus NGOs including WorkPhil and Sagip-Buhay.

Lawyer Levito Baligod, former counsel of pork barrel scam star witness Benhur Luy,  on Wednesday filed a malversation complaint before the Office of the Ombudsman against the 20 officials including Representative Robes.

Read Next
Judges’ organizations condemn killing of Baler judge
EDITORS' PICK
China already has supply of face masks, Duterte explains sourcing choice
Gov’t aims to vaccinate 90% of population vs. COVID-19 before 2022 elections
Smart powers Liga Adarna Season 4: Race to the Top
Miss Universe Philippines partners with JC
Apollo Quiboloy threatens to run for president in next year’s polls
‘No more face shields outside’ – Duterte
MOST READ
‘No more face shields outside’ – Duterte
Gordon: Senate uncovered ‘mother of all corruption’ under Duterte admin
Who is Julian Ongpin?
Isko Moreno reaches out to other presidential bets for unity
Don't miss out on the latest news and information.