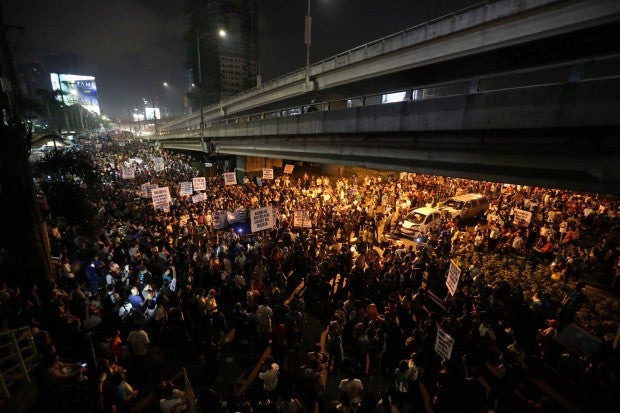 The National Union of Journalists of the Philippines (NUJP) condemned the cases of physical assault directed against journalists which were recorded during the four-day protest of the influential religious sect Iglesia ni Cristo (INC) that ended on Monday.

In a statement, the NUJP condemned the mauling of ABS-CBN cameraman Melchor Pinlac by unknown assailants during the INC rally. According to reports, Pinlac was punched on the jaw, body, and nape while the crowd chanted “biased, biased.” Radio dzBB reporter Olan Bola was also shoved around when he tried to help Pinlac but fortunately was not injured.

NUJP said that while some sectors may feel slighted by media outfits, this does not justify inflicting physical violence against journalists, especially those who are merely performing their work duties.

“It is perhaps inevitable that some quarters may feel, rightly or wrongly, that a media outfit or practitioner may be biased against an issue they feel strongly about. However, not this or anything perceived slight, for that matter, can ever justify a physical assault against media practitioners,” the statement read.

The NUJP also hit the INC leadership for its failure to control its members.

“Given that in such mass gatherings as the INC protest, it does not take much for a peaceful crowd to transform into an out-of-control mob, it was the responsibility of the religious group’s leaders to rein in their followers. That they failed to do so can be attested to by many other reports of motorists and passersby being harassed, in some instances, physically. For this, the leadership of the INC is primarily to blame,” it added.

NUJP demanded swift action for Pinlac’s case and asked the INC leadership to issue a public apology to Pinlac and Bola.

“We also call on the leadership of the INC, if they believe in fairness and justice, to issue a public apology to Mr. Pinlac and Mr. Bola, as well as their networks, and ensure their members’ cooperation should our colleagues choose to take legal action against those who assaulted them,” it said.

The protest stemmed from the religious sect’s demand to the Department of Justice not to act on the complaint of illegal detention filed by expelled INC minister Isaias Samson Jr. against the members of the Sanggunian, the INC’s highest advisory council.

The INC claimed that acting on Samson’s complaint is a violation of the separation of church and state. Aries Joseph Hegina/RAM