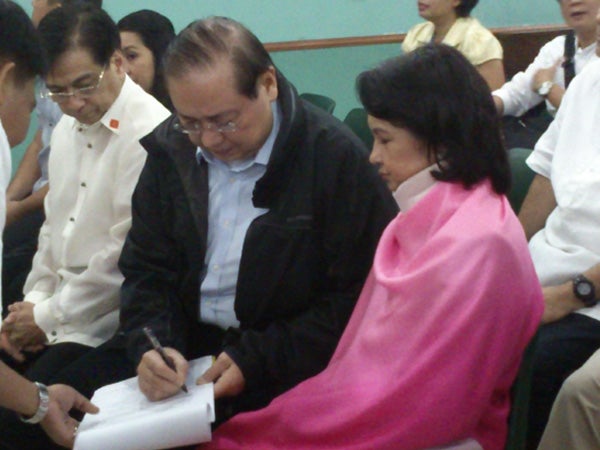 In a supplemental to her motion for house arrest, Arroyo through her lawyers said her residence in La Vista subdivision where she wants to be detained is also occupied by her husband Mike Arroyo and a few household staff.

Within the premises of the La Vista residence is the quarters where the Presidential Security Group (PSG) resides, according to the motion filed before the Sandiganbayan First Division.

Arroyo’s lawyers clarified that the presence of Mr. Arroyo actually rules out, instead of increasing, the possibility of flight risk.

The former first gentleman faces a graft trial before the Sandiganbayan for selling to the police two secondhand helicopters as brand new.

Meanwhile, the occupants of Arroyo’s residence in Lubao, Pampanga are a few household staff, according to her motion.

In her motion to modify custodial arrangement, Arroyo’s lawyers have said her continued detention in the Veterans Memorial Medical Center (VMMC) only worsened her health and a change in environment would help her recover from her degenerative bone disease.

Her lawyers had argued Arroyo was kept safe in La Vista when she was granted a four-day Christmas furlough in 2014 following the death of her one-year old grandson Jugo.

Besides Arroyo’s residence at La Vista subdivision, the incumbent Pampanga representative wanted to be detained at her 500-square meter residence in Lubao which is just 200 meters from the nearest police station.

Arroyo had also said she is willing to be placed under the stringent restrictions similar to the house arrest of former President (now Manila mayor) Joseph “Erap” Ejercito Estrada which was used as the precedent for Arroyo’s motion.

The Sandiganbayan had allowed Estrada house arrest in his rest house in Rizal as he faced plunder charges over illegal gambling. Estrada was convicted by the court but later pardoned by Arroyo.

Arroyo said these restrictions include the police control over communication devices, a ban on media interviews unless the court permits it, among others.

Arroyo filed the motion for house arrest after the antigraft court’s first division denied her demurrer of evidence, a move to dismiss the supposedly weak evidence against her and dismiss the case.

Arroyo, 68, is under hospital detention due to plunder for allegedly using P366 million in intelligence funds for the Philippine Charity Sweepstakes Office (PCSO) from 2008 to 2010 for personal gain.

The former president is confined at the VMMC as she claimed to be suffering from cervical spondylosis, a degenerative disease of the bones and cartilage of the neck.

Arroyo had also complained of “generalized body weakness, persistent pain over the nuchal and left shoulder with numbness of both hands and frequent episodes of choking,” according to the VMMC. Marc Jayson Cayabyab/IDL