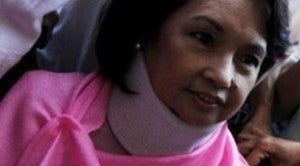 For former-President Gloria Macapagal-Arroyo, home is where her house arrest should be.

After initially asking for house arrest in her residence in a lush subdivision in Quezon City, detained Arroyo now wants to be held in Pampanga.

In a supplemental motion to her original plea, defense lawyers of Arroyo told the Sandiganbayan that the ailing former president should now be placed under house arrest in her “home” in Lubao, Pampanga

Arroyo’s counsels said this should not be an issue because her house in Lubao was just 200 meters from the municipal police station.

Also, the lawyers noted that this should be upon the clearance of the doctors of Arroyo, now Pampanga Representative, who faces plunder over a charity funds mess.

“If, for any reason, the Honorable Court is not disposed to grant her request for house arrest at La Vista Subdivision, President Arroyo respectfully asks that the Honorable Court consider granting her house arrest at her provincial residence at Puruk 6, San Nicolas 1, Lubao, Pampanga, which has an area of less than 500 square meters, has a perimeter fence, and is around 200 meters away from the municipal police station,” the motion read.

“Lubao is home to President Arroyo,” it added.

Arroyo made her motion for house arrest days after the antigraft court’s First Division denied her demurrer to evidence, a legal move to dismiss her plunder charges due to insufficient evidence.

In her original motion, Arroyo asked the court to transfer her place of detention from the Veterans Memorial Medical Center (VMMC), where she is under hospital arrest, to her residence in La Vista, Quezon City.

Arroyo said a house arrest might help her heal faster from her spine ailment, having undergone three spine surgeries already.

“It is hoped that President Arroyo’s house arrest can help her recuperate and heal more quickly and fully,” the motion said.

“House arrest is not special treatment. It is a mode of arrest allowed by the Rules and recognized by the Supreme Court,” Arroyo said in the motion.

Arroyo then cited a Supreme Court ruling upholding the Sandiganbayan’s decision to allow former President Joseph Estrada house arrest in his rest house in Rizal as he faced plunder charges over illegal gambling. Estrada was convicted by the court but later pardoned by Arroyo.

She also said being detained in her home would not be a threat to the community, citing the peaceful situation during her four-day Christmas furlough granted by the court last December.

Arroyo is under hospital detention for plunder over the alleged misuse of P366 million from the intelligence funds of the Philippine Charity Sweepstake Office from 2008 to 2010 for personal gain.

The former president is confined at the VMMC amid claims of suffering from cervical spondylosis, a degenerative disease of the bones and cartilage of the neck.