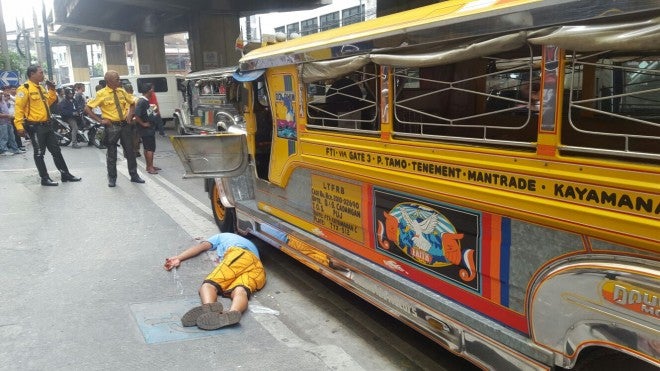 Jeepney driver Jerric Accad lies on the pavement after being shot by an irate pedestrian in Makati City. INQUIRER.net FILE PHOTO/CENON BIBE JR.

Not long after the jeepney driver was shot by a pedestrian he almost hit outside a Makati City mall, he died after sustaining a gunshot wound in the head on Thursday afternoon.

Makati Police’s homicide investigator SPO2 Dominador Robles said attempts to revive 35-year-old Jerick Accad failed while he was at the Makati Medical Center (MMC) where he was brought after a still unidentified man shot him in the left temple near his eye. He was declared dead at 4:50 p.m Thursday.

Around 2:45 p.m. on Thursday, Accad, a resident of Western Bicutan, Taguig City, was plying the Waltermart (Makati)-FTI route when he turned left at the intersection of Chino Roces and Arnaiz avenues near Waltermart mall and nearly sideswiped the assailant who was standing near the corner.

Irked, the man drew a .22-caliber firearm and approached Accad who had pulled over nearby to wait for passengers. The pedestrian then confronted Accad, who was repeatedly apologizing to him, shot the driver in the head and fled.

In an earlier INQUIRER.net report, it said witnesses described the shooter as a bald man in his 50s, 5’7” in height and of heavy build. They said the man wore a yellow shirt and walked with a limp.

Basing on the accounts of witnesses, the case investigator told INQUIRER.net over the phone that the Makati Police have yet to establish the identity of the attacker.

He said the incident is considered a road rage case while investigators are still establishing the motive behind the shooting.

But according to Accad’s relatives who sought the help of Makati police on Thursday night, the victim “was a good person and had no enemies.”

“So for the meantime, we could deduce it’s a road rage incident. But we will not stop there. There might be something deeper than that,” he said. Julliane Love de Jesus, INQUIRER.net/IDL