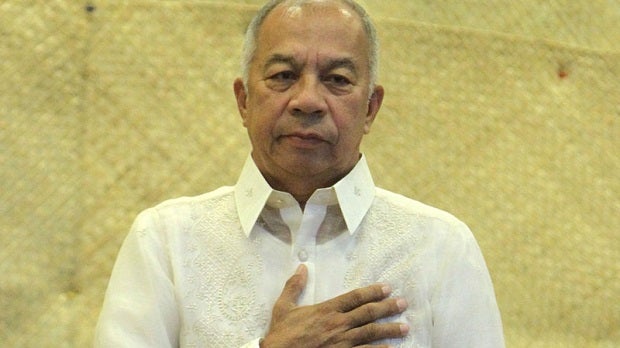 Aside from the President’s order to stop the physical inspection of balikbayan boxes, the Bureau of Customs (BoC) has also come up with several measures that would hasten the processing of overseas Filipino workers’ (OFWs) shipments, including the implementation of a pre-clearance system.

Customs Commissioner Alberto Lina said that balikbayan boxes with proper documentations would be given a “pre-clearance” in the presence of an OFW representative.

“Hinihikayat ko kayong maglgay ng isang tao dito sa aking office…so I can be really at your side eight hours a day. Ito’ng hinhingi ko, Ambassador, if you could kindly provide an OFW representative [by] my side ‘pag tingin palang ng dokumento…” Lina said, referring to OFW Partylist Representative Roy Señeres, who joined him at a press conference in his office on Friday.

(I urge you to assign someone here in my office…so that I can be really at your side eight hours a day. This is what I ask for, Ambassador, if you could provide an OFW representative [by] my side upon document inspection…)

(Those [balikbayan boxes] will no longer be opened. As a matter of fact, [they have already been] pre-cleared. This is my add-on, this is the President’s present to you…Prior to arrival, [the balikbayan box] may already be cleared.)

The Customs earlier planned to open all balikbayan boxes but it was met with strong objection, especially from OFWs. This prompted President Benigno Aquino III to order the BoC to stop its implementation.

But Lina said all shipments containing balikbayan boxes would still undergo mandatory x-ray examination and if the Customs finds derogatory findings in the x-ray, then the container van will be opened so boxes could be individually scanned through smaller x-ray scanners.

“Only then will a physical inspection can be considered,” he said.

Aside from the implementation of a pre-clearance system, Lina said the agency is now also in the process of identifying how many K9 units the agency needs to cover all airports and seaports. He said the BoC has also procured more than 200 additional CCTV cameras.

“Today is not about collecting revenues. The Bureau of Customs is implementing the full force of law according to the Customs and Tariff Code of the Philippines,” Lina said at the start of the press conference.

“But we understand there is an urgent need to modernize these laws and processes so we’re calling on our friends in Congress to [address] the Customs Modernization and Tariff Act so we’ll be able to improve our delivery of services to the entire nation, especially to the benefit of our OFW kababayans.”

“This day is about assuring our OFWs that we’re listening and we’ll make sure that we move forward in this issue together,” he added.

Lina reiterated that they had no intention to single out the OFWs when they planned to open the balikbayan boxes.

(We were not singling [them] out. What happens is that the balikbayans’ and OFWs’ name was used by those who wanted to smuggle, so we are asking for understanding that that is what happens.)

Deputy Commissioner Art Lachica echoed Lina’s statement that the agency was not targeting the OFWs.

(It’s unfortunate that it was blown out of proportion, the focus was shifted to the balikbayans. That was not the intention.)

After the press conference, Customs officials led the media to a walk-through at the port to demonstrate how shipments are being examined through x-rays. Maila Ager, INQUIRER.net/CDG

Aquino orders BOC: Only suspect OFW boxes must be opened

Read Next
Binay defends Iglesia ni Cristo, chides Aquino gov’t
EDITORS' PICK
97% of COVID-19 beds at PGH currently occupied
Gear up and get ready to play with Yamaha Mio Gear
Acer starts the year off strong with the Aspire Vero National Geographic Edition
Japan brings back virus restrictions over Omicron surge
Over 3 Million worth of prizes to be won at Smart Padala’s SENDali Manalo Promo!
Uproar over no vax, no ride policy: Maybe it’s time for gov’t to say sorry—Bello
MOST READ
1Sambayan names 7 aspirants in its 2022 Senate lineup
Emma Stone calls Andrew Garfield a ‘jerk’ after he ‘lied’ about his ‘Spider-Man: No Way Home’ appearance
Guevarra to Acosta: Obey rules on unvaccinated
Commuters affected by ‘no vax, no ride’ policy may file class suit —Lacson
Don't miss out on the latest news and information.