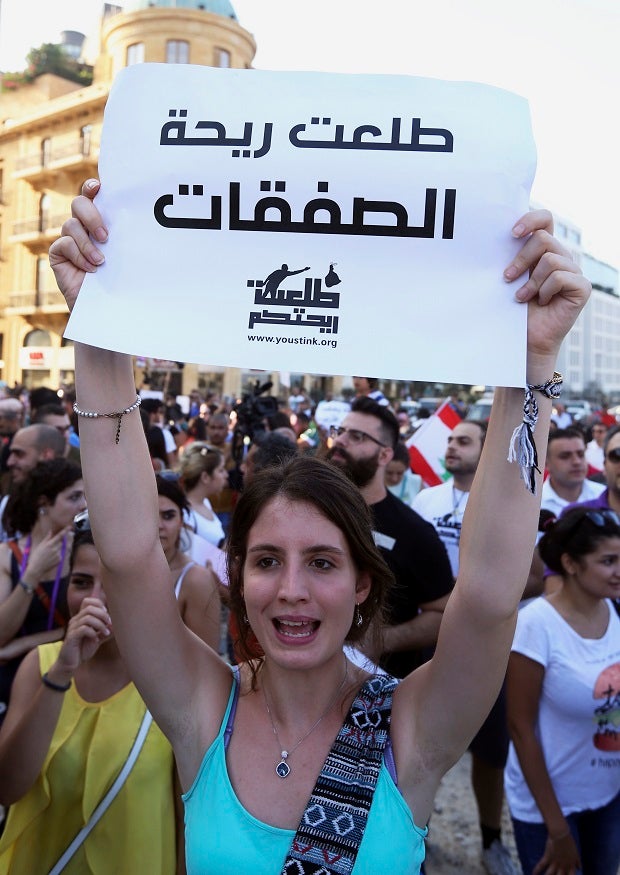 In this Saturday, Aug. 8, 2015 file photo, a Lebanese protester chants slogans against the Lebanese government during a demonstration against the ongoing trash crisis, at the Martyrs square in downtown Beirut, Lebanon. Starting out as a small group of tech-savvy young activists who organized to protest the garbage that for weeks has been piling up on Beirut’s streets, Lebanon’s “You Stink” movement has now grown into a popular uprising that seeks to nip at the power base of an entire political class. Sign in Arabic reads ‘The deals stink’. AP FILE PHOTO

BEIRUT, Lebanon — First they egged the prime minister’s building. Then they dumped some of the garbage piling up on Beirut’s streets outside the home of the environment minister, furious the government couldn’t get its act together to find a solution when Lebanon’s main landfill shut down.

But perhaps the most electrifying move by the young, tech-savvy group of activists was when they spread their catchy slogan “You Stink” across social media. It helped turn the trash crisis into a popular uprising against a political class that has dominated Lebanon since its civil war ended in 1990.

The core founders of “You Stink” include one of the Middle East’s most influential bloggers, as well as a creative media strategist, a rights lawyer, journalists and an actress whose film was banned by authorities for addressing touchy sexual issues. The group quickly picked up supporters from across the spectrum of Lebanon’s divisive politics and sects.

“We are the future of this country and the agents of change. If the youth didn’t do this, no one will do it,” said Nadyn Jouny, a 25-year-old freelance journalist who is among the group’s founding members.

She said the movement was a reflection of the growing frustration with an aging and corrupt political class that has failed to even show concern for people’s woes. She called it “the regime of the warlords.”

“You Stink” claims to have set aside ideology in its effort to mobilize support for an uprising against the political establishment. It says it seeks to ditch a patronage system that divvies up power to each of Lebanon’s multiple communities — Shiites, Sunnis, Christians, Druze and more — in favor of a non-sectarian culture.

That system has been the center of Lebanese politics for decades and helped fuel the 15-year civil war — and critics say it leads politicians to spend more time cultivating their sectarian fiefdoms than actually governing.

“You Stink” is up against aging warlords and oligarchs who have passed power on to their sons and relatives for generations — and continue to hold the country’s top positions with expansive business interests and powerful militias that helped them survive the war. Consecutive governments neglected to improve the country’s infrastructure, leading to chronic water shortages and electricity cuts that continue 25 years after the war ended.

“The corruption has been around for so long. But the people have also now smelled it,” said Tarek Sarhan, a 17-year-old “You Stink” supporter.

Jouny said the stench from the mounds of trash that blocked Beirut streets was a wake-up call to residents who took pride in their beautiful city. Two major rallies over the weekend brought some 20,000 people into the streets of the capital, numbers rarely seen in a country wary of the chaos in neighboring Syria.

The last time large numbers took to the streets was a decade ago, after the 2005 assassination of Prime Minister Rafik Hariri. Hundreds of thousands of people from all sects demonstrated in peaceful rallies that were dubbed the “Cedar Revolution.” Those protests eventually led to the withdrawal of Syrian troops from Lebanon after a decades-old presence — but sectarian politics quickly returned.

The idea for “You Stink” began on Facebook, and the group has tried to avoid the mistakes of other Arab protest movements by reaching out to existing youth organizations to help coordinate, Jouny said.

Neamat Bader al-Deen is a leftist activist with a group that calls itself “We Want Accountability,” one of several organizations collaborating with the movement.

“We are asking the government to resign because it failed to resolve the crises,” the 34-year-old Bader al-Deen said. “We will not let this pass. This is robbery.”

Sarhan said his father initially ridiculed the group’s symbolic protests. But when thousands turned up at the allies last weekend, his father called to offer support.

At first the veteran politicians ignored the protesters. But after the crowds grew and turned violent over the weekend, the government erected a concrete wall Monday outside its main building to keep them at bay.

Within hours, the wall was filled with anti-government graffiti. On Tuesday, authorities took it down, just 24 hours after it went up.

Now, politicians are trying to co-opt the young grass-roots movement. A main Christian party has called on its supporters to join the next “You Stink” protest on Saturday.

“The parties want to spoil the movement … because it is becoming popular and that is scaring them,” Jouny said.

She said to ensure the group reflects the mood on the street it scans views on social media before making decisions. Several hundred volunteers have been prepped on strategies to ensure violent clashes don’t erupt at Saturday’s rally, which is being promoted with a video decrying Lebanon’s endemic electricity shortages.

Assad Thebian, one of the country’s best-known bloggers and the winner of an Arab creative digital campaign award, said attempts to stymie the movement will fail. That’s because young men and women fed up with the sectarian system are its backbone, he said.

“They are disgusted with the same political class robbing them, and sucking their blood all their lives, same as their fathers and their grandfathers,” he said. “This is something we want to get rid of. We want to all become children of the state.”