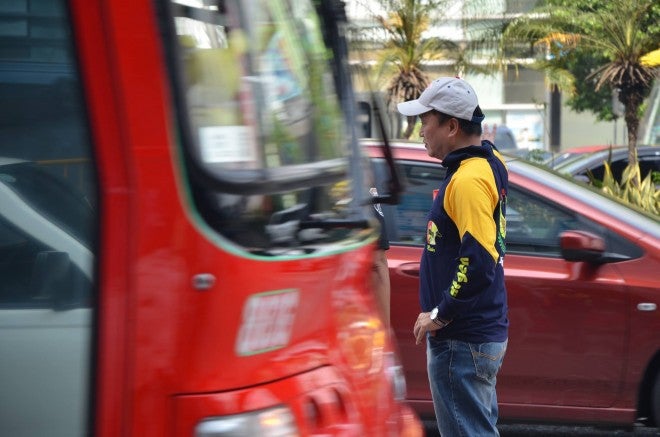 Manning morning rush-hour traffic in two chokepoints in the metro seemed to have been the answer of Metropolitan Manila Development Authority (MMDA) Chairman Francis Tolentino to people calling him to resign from his post.

As early as 7:30 a.m. Wednesday, Tolentino was seen managing traffic along Katipunan Avenue in Quezon City near Ateneo de Manila University then an hour after along Edsa in front of SM Megamall in Mandaluyong City.

However, his gesture drew mixed reactions from motorists and netizens.  Some netizens praised Tolentino for serving as a traffic constable for a few hours with one even posting on Twitter “Whatever you did to Katipunan-C5 this morning. Keep doing it.”

But majority of those who reacted on social media still bashed him for managing traffic.

“He is just good during photo-ops. That’s not your job. Think of ways to ease traffic,” a netizen commented.

Others also commented that his act was just “all for show” with him even informing members of the media that he would personally manning vehicular traffic on the two main roads.

PSLINK described itself as a “champion of human rights, advocate for social justice and promoter of universal access to quality public services.” It claims a membership of about 85,000 public workers.

Under the petition, PSLINK highlighted the “unending traffic problem” along main metro thoroughfares and blamed it on the agency headed by Tolentino.

“It is now 2015, and MMDA still has no concrete solution to our traffic woes and misery. In fact our traffic problems have worsened,” the petition read adding that it would take a commuter two hours to travel from Commonwealth Avenue in Quezon City to Makati City, a 15-kilometer trip that used to take 30 minutes before.

It also said that instead of thinking of ways to solve metro traffic, Tolentino has been “busy joining sorties [and] we are left to fend for ourselves in the traffic.”

“Sobra na, Tama na, Palitan na! (Too Much!  Enough with that!  Replace!)” PSLINK added then called on the MMDA chair to resign from his post and not use this to his advantage for the upcoming elections.

“You have no right to be in MMDA while we tax payers wallow half of our time in a day in traffic,” the petition further read.

As of Wednesday afternoon, the petition has earned more than 2,000 signatures mostly from people complaining of the terrible metro traffic.

In response to this, Tolentino refused, on Wednesday, to resign from his post but instead encouraged people to join hands in solving perennial traffic woes in the metro.

He also said that this was not the first time he personally managed traffic along busy streets in Metro Manila.

The MMDA chair also expressed hope that the traffic situation would improve. He said the solution would not be to increase the number of traffic enforcers but to add more roads.

Asked about his plans to run for Senate in the 2016 polls, Tolentino said President Aquino would be the one to decide on that. (Maricar B. Brizuela, Philippine Daily Inquirer)