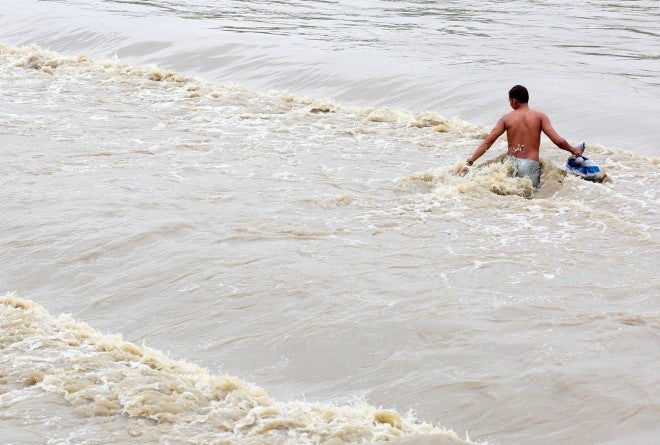 Fongwan asked the Benguet Electric Cooperative (Beneco) to speed up the restoration of power to the mining town of Mankayan where miners, soldiers and policemen are frantically searching for survivors of a massive landslide on Saturday that swept away several shanties put by small-scale miners.

Without electricity, rescue efforts were stalled on Saturday night, when the creek began to swell due to heavy rain in the province.

But some residents did not let up their own search.

Lilian Faliao, a resident, said the victims where encamped in shanties put up for small-scale miners when the mountainside eroded at 3 a.m. Saturday in Sitio Elizabeth, Barangay Taneg.

Taneg residents and volunteers began digging through mud, rocks and debris, while other rescuers scanned the creek below, Faliao said.

Authorities said 18 people were initially listed as missing, but two of them — Joni Tomalban Foster and Marpite Tomalban —  were not at the pocket mining site when the accident happened, said Mankayan Mayor Materno Luspian.

In Kalinga, rescuers in Tabuk City recovered the body of Julius Gumisa, 23, who was swept away by the Chico River in nearby Mt. Province.

Mankayan has lost more lives to the typhoon than any other upland Cordillera town this week.

Earlier on Saturday, Noel Lubante Jr., 21, and his partner, Nora Mae Diaz, 17, who was six months pregnant, were found dead after a landslide buried their house in Sitio Cotcot in Barangay Bulalacao in Mankayan, police said.

These casualties in Benguet and Kalinga have raised Ineng’s death toll in northern Luzon to 14.

On Friday, separate landslides in Mankayan killed pocket miner Glen Poloc Baldasan, 27, who was on his way home, and Michael Martin Lagasan, 59, when his vehicle was buried by mud and rocks.

Other typhoon-related fatalities were reported in the Benguet towns of Bakun, Buguias and Atok; and in the provinces of Ilocos Norte and Mt. Province.

Damage due to road cuts along Halsema Highway in the Cordillera reached P1.9 million, according to the Benguet police. Halsema Highway is the main road used by truckers to transport vegetables from Benguet farms to Baguio City and Metro Manila.

Kennon Road, a major route to and from Baguio City, remained closed on Sunday as government personnel cleared a massive landslide. Marcos Highway and Naguilian Road, the other routes to the summer capital, were open on Sunday amid heavy rain in the area.

In the Ilocos region, Ilocos Norte and the first congressional district of Ilocos Sur, from Vigan City to Sinait town, lost power on Sunday due to the toppling of a 115kV steel tower along the Santa Maria River in Barangay Nagtupacan in Santa Maria, Ilocos Sur.

Lilibeth Gaydowen, Northern Luzon corporate communications and public affairs officer of NGCP, said repairs have started but workers had to wait for the swollen Santa Maria river to subside to complete all work needed to restore power.

Portions of the national highway in Candon City and Narvacan, Ilocos Sur, had been flooded and rendered impassable on Sunday.

Governors Imee Marcos (Ilocos Norte), Ryan Singson (Ilocos Sur) and Eustaquio Bersamin (Abra) ordered the suspension of classes in all levels in their respective areas on Monday due to the impact of the typhoon and the continuous rain and flooding.

Marcos on Sunday urged the Department of Energy (DOE) and generating companies in the Ilocos region to get together and work out a faster way of redirecting power to the province, fearful that the blackout may last for two weeks.

She also directed local gasoline stations to stock up in preparation for a rise in demand from commercial establishments, hospitals and government offices that would operate using generator sets.

Reports said roads in eight villages in Solsona town, six in Dingras, two in Bacarra and one in Banna remained impassable due to floods.

In Pampanga, the water levels of dams operating in Central Luzon rose fast as Ineng dumped rain  in the region, data from the Regional Disaster Risk Reduction and Management Council (RDRRMC) showed.

In Bulacan, water in Angat Dam increased from 180.60 meters above sea level (masl) on Friday to 181.79 masl as of 6 a.m. Sunday. The dam, which provides more than 90 percent of Metro Manila’s supply, is still below its 210 masl spilling level.

Water elevation in the Ipo Dam, also in Bulacan, increased from 99.80 masl on Friday to 100.40 masl, putting it close to the 101 masl spilling level.

The Pantabangan Dam in Nueva Ecija took in more water as reservoir levels climbed from 181.39 masl to 184.22 masl. The elevation, however, was still below the facility’s 216 masl spilling level.

In Carranglan, Nueva Ecija, 37 residents in Barangay Piut remained in a school after a tornado destroyed their houses there on Friday.

In Olongapo City, an erosion damaged two houses in Purok 13 in Barangay Barreto while a tree fell on a house in Barangay Kalaklanalso on Friday.

In Tarlac, the Capas tourism office had not lifted a temporary ban on treks to the Mt. Pinatubo crater-lake via Barangay Sta. Juliana to ensure safety of tourists.

On Friday, fishermen started removing the dredge floater assembly from their village’s shoreline because they feared that huge waves will push the equipment and hit their houses.

As of Saturday, only 17 of 39 dredge floater assemblies, which were found in the Zambales sea in July, were moved to the shore.    Kimberlie Quitasol, Leoncio Balbin Jr., Leilanie Adriano and Vincent Cabreza, Inquirer Northern Luzon, and Tonette Orejas and Allan Macatuno, Inquirer Central Luzon