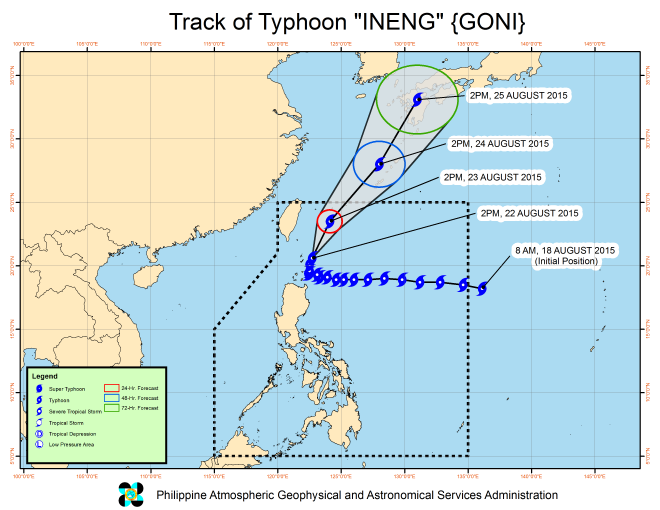 More people were reported killed on Saturday due to landslides in various parts of Northern Luzon, raising Typhoon “Ineng’s” toll to 10 people dead, at least seven injured and two missing.

The powerful howler is expected to leave the Philippine area of responsibility (PAR) Sunday.

Among the fatalities were Michael Felix, 58, a farmer, who was killed in a landslide in vegetable-producing Buguias town, Benguet. Glen Poloc Baldasan, 27, a pocket miner, was buried in a rock slide as he made his way home in Mankayan, Benguet.

Earlier, Erwin Celo and his brother Markin, members of a road crew who pitched a tent along the road in Sitio Takayan, Barangay Gambang, in Bakun town, Benguet, were buried in a rock slide on Friday.

On Saturday, in Atok town, a landslide buried the house of Juanito and Regina Catubing, killing their year-old baby Jury and injuring a 3-year-old child.

In Pinili, Ilocos Norte, a motorcycle was hit by a fallen mango tree, killing its passenger, Herminio Tabuyo, 47, and injuring its driver, Luiller Dahilig, 67.

The National Disaster Risk Reduction and Management Council (NDRRMC) listed two people missing since Aug. 20. One was Jubert Bumatau of Barangay Baraoas Norte, Naguilian, La Union. Another, Jar-ar Mallari, 24, of Solsona town was reported missing on Friday after he attempted to cross the swollen Sabo River.

The typhoon brought heavy rains, pounding a wide area of Northern Luzon on Saturday and forcing major power dams in the region to open their floodgates.

At noon on Saturday, a swollen Agno River, compounded by water discharged by the Ambuklao and Binga hydroelectric dams in Benguet, compelled the operators of San Roque Dam in Pangasinan to open two of its spillway gates.

Intermittent rain in Baguio City since Friday forced the closure of Kennon Road, a main highway link to the summer capital.

In Ilocos Norte, the provincial board placed the province under a state of calamity due to extensive flooding.

Landslides blocked access to 17 major Cordillera roads, including a weakened portion of Kennon Road near the iconic Lion’s Head.

In Kalinga, Army soldiers and volunteers rescued 25 people who had been tending their farms along the Chico River in Pinukpok town. They were helping three more farmers cross back to the town yesterday. Those rescued said they did not anticipate the swelling of the Chico River.

Officials said a tornado ripped through Pagudpud and Sarrat towns, damaging houses there.

Since the typhoon entered the PAR on Aug. 18, the NDRRMC listed a total of 1,194 families evacuated in Regions I, II and the Cordillera Autonomous Region.

Public storm warning signal No. 3 remained hoisted over the Batanes group of islands; No. 2 over the northern Cagayan area, including Calayan and the Babuyan group of islands; and No. 1 in some parts of Calayan, Ilocos Norte, Kalinga and Abra.

In its weather bulletin at 5 p.m. on Saturday, the Philippine Atmospheric, Geophysical and Astronomical Services Administration (Pagasa) noted that “Ineng” had weakened slightly, with reduced center winds from 195 kilometers per hour to 185 kph.

The storm is not forecast to make landfall in Taiwan, but authorities there have evacuated people in outlying islands due to expected heavy rains and gusty winds. At least 1,700 tourists have been evacuated from Taiwan’s Green and Orchid islands. Offices and schools have been closed since Friday.

Pagasa forecasts moderate to heavy rainfall in areas within 500 km of the typhoon, and monsoon rains over Metro Manila and the rest of Luzon.

‘Ineng’ kills 10 before slowing down

Read Next
Binay camp: Yes, we’re banana republic, but not due to SC
EDITORS' PICK
Look Through: The fate of impounded stray dogs
Palace warns sugar hoarders after raid on Pampanga warehouse
What to watch out for when selecting a video surveillance solution
Unleash the photographer in you this World Photography Day with vivo smartphones
House energy committee chair Arroyo bats for cheap electricity
Metro Manila’s COVID-19 cases on downward trend, but surge not over — OCTA
MOST READ
Man abducted in Batangas gasoline station, found dead in Quezon
LOOK: Miel Pangilinan dazzles in glittery pre-debut shoot
PNP bars US legislators’ visit to De Lima due to lack of authority from court
WATCH: Rick Astley re-creates ‘Never Gonna Give You Up’ music video 35 years later
Don't miss out on the latest news and information.