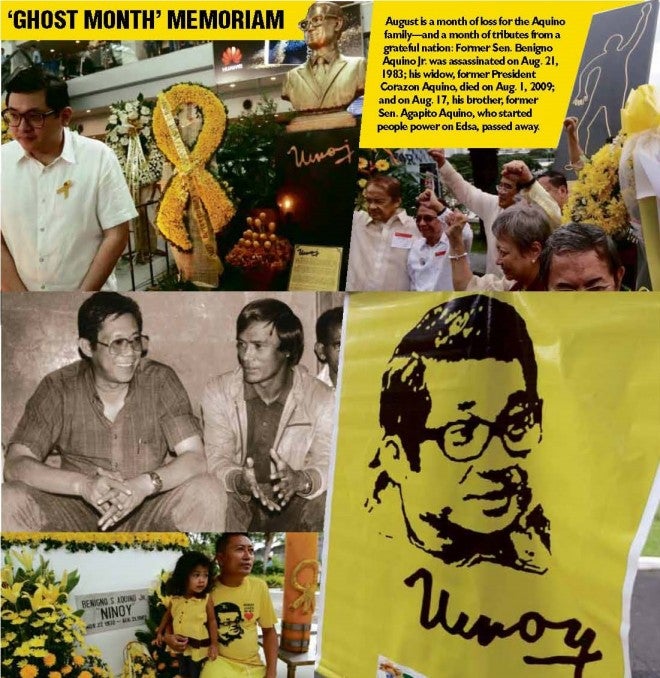 ‘GHOST MONTH’ MEMORIAM August is a month of loss for the Aquino family—and a month of tributes from a grateful nation: Former Sen. Benigno Aquino Jr. was assassinated on Aug. 21, 1983; his widow, former President Corazon Aquino, died on Aug. 1, 2009; and on Aug. 17, his brother, former Sen. Agapito Aquino, who started people power on Edsa, passed away. INQUIRER PHOTOS

Always look on the bright —and light—side of life.

The maxim appears to have recurred throughout former Sen. Agapito “Butz” Aquino’s colorful life as a democratic leader and family man, according to the speeches given by his children during a funeral Mass on Saturday at his alma mater.

In the eulogy delivered after the Mass at the Loyola School of Studies chapel at Ateneo de Manila University in Quezon City, Aquino’s children fondly recalled their father’s cheeky sense of humor.

“Papa Butz loved to spread joy and cheer,” said his son Bobby, sharing with relatives and friends what the siblings have come to call “Butz-isms.”

Bobby recalled a story from his father’s high school years: “He claimed he had a conversation with a Jesuit priest. He said ‘Father, can we smoke while praying?’ To which the priest answered: ‘No, that would be sacrilege.’”

“So he asked, ‘But can we pray while smoking?’ The priest had to say yes.”

His daughter Jackie remembered one of her father’s favorite quips: Calling the Edsa revolution “nun-violent,” referring to nuns leading the peaceful 1985 street protest against the Marcos dictatorship.

Jackie also retold another one of her father’s favorite campaign jokes: Aquino would say his grandfather was imprisoned by the Japanese, his father by the Americans, his brother by a dictator, and he—by his wife.

Another favorite: When Aquino would vote “No” at the Senate, he would say “Aqui-NO.” When he would lead prayers during Senate sessions, he would ask God for humility, then publicly name the lawmakers he felt needed the virtue.

“He was always full of jokes. That’s what many people remember him for,” Jackie said, breaking into a grin.

Aquino’s youngest daughter, Kat, recalled how her father would tell her at the dinner table that he was her favorite daughter, then minutes later, turn to another daughter and tell her the same thing.

“He loved to entertain,” daughter Roxanne said. “Once he came out in a movie as a super supporting actor. We watched it in Cubao. He parked far away, then walked slowly, so he would be recognized,” she said.

Bobby recalled that even when his father’s fiberglass factory burned down, he would still gather the workers and hold Christmas parties for them. “That went on for two decades,” Bobby said.

“Papa Butz really loved Filipinos. He loved those who had less in life. He constantly tried to teach us to do [the same],” Bobby said.

Made time for ordinary folk

Father Manoling Francisco, SJ, who celebrated the Mass, described Aquino in his homily as a man of “compassion.”

“He made time for the ordinary people,” Francisco said. “I told him, ‘Tito Butz, you are a giant. And I thank you for having strengthened our own faith and conviction that God’s promises will come into fulfillment.’”

Francisco also said the chapel where the funeral Mass was held, Oratory of Saint Ignatius, was actually “historic” and “aligned” to Aquino’s “vision and mission.”

“Back in Feb. 22, 1985, [Manila Archbishop Jaime] Cardinal Sin ordained two Jesuits here. During the reception, the cardinal received a call that [Juan Ponce] Enrile and [Fidel V.] Ramos defected. Right after the ordination reception, hundreds of seminarians from San Jose seminary and Loyola House of Studies headed to Camp Crame. They were the first contingent there. After [that], Tito Butz, from Isetann Cubao, invited them to assemble at Isetann and march to Camp Crame.”

“This chapel, dedicated to freedom and peace, is very much aligned to the mission and vision of Tito Butz,” Francisco said.

Aquino will be laid to rest at St. Therese Columbarium in Pasay City. No definite date has been set.