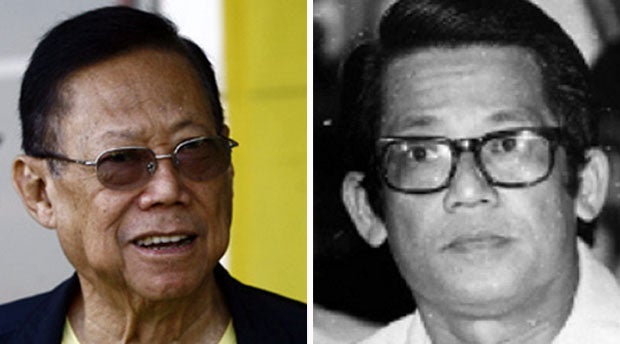 The lives of Ninoy and Butz Aquino are like those of biblical characters Moses and Joshua, a priest said in his homily during the memorial Mass at La Salle Green Hills to mark the 32nd death anniversary of slain senator Benigno “Ninoy” Aquino.

“It is the destiny and vocation of [Moses] to denounce oppression and evil, and to accompany his people during their struggles; but he [wasn’t able to] set foot on the promised land of a restored democracy,” Fr. Manoling Francisco said.

The priest noted that following Ninoy’s death, Butz “took up the cudgels and pick[ed] up the staff of freedom” when he formed the August 21 Movement (Atom), spearheaded the Tarlac to Tarmac protest march, and became one of the main organizers of the confetti rallies at Makati and various daily protest marches against Marcos’ dictatorial rule. He was like Joshua, who assumed leadership of the Israelites after Moses’ death, he added.

The sacrifice that Ninoy Aquino made more than three decades ago continues to resonate even with the younger generation, Malacañang said on Friday.

The country observed on Friday the 32nd death anniversary of Aquino, a key figure in the struggle against the Marcos dictatorship whose assassination eventually led to the Edsa People Power Revolt and the strongman’s ouster.

President Aquino marked the day by visiting his father’s grave at Manila Memorial Park in Parañaque City where he spent a few moments alone by the grave bedecked in wreaths of yellow flowers from the famous and the anonymous. 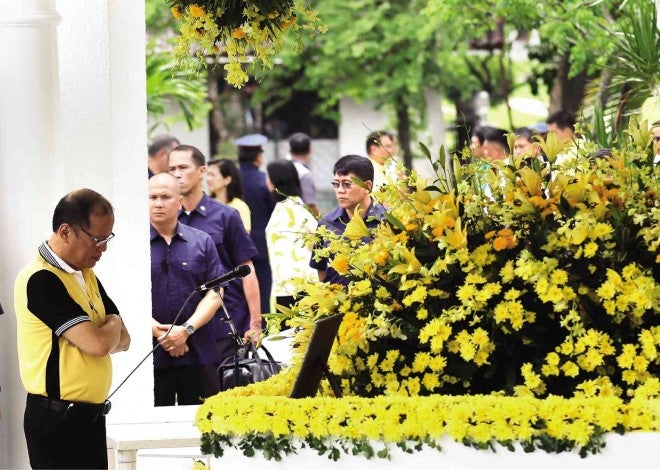 SOLEMN, SOLITARY, SOULFUL A pensive President Aquino spends a few moments alone—apart from the crowd—by the grave of his father, martyred Sen. Benigno “Ninoy” Aquino Jr., at his 32nd death anniversary on Friday. Three of Mr. Aquino’s sisters—Ballsy Aquino-Cruz, Viel Aquino-Dee and Pinky Aquino-Abellada—joined him in visiting the flower-bedecked tomb of their father at Manila Memorial Park in Parañaque City. RAFFY LERMA

Mr. Aquino proceeded to La Salle Green Hills to attend the Mass for his father and his uncle, Agapito “Butz” Aquino, who died on Monday. The commemoration rite was kept solemn and simple, with only five funeral wreaths displayed inside the chapel. One of them came from Sen. Ferdinand “Bongbong” Marcos Jr.

Heherson Alvarez, founding chair of NAM, led the wreath-laying ceremony at the Aquino granite marker in the departure area of Terminal 1—the exact spot where the vocal Marcos critic died.

A highlight of the event was the awarding of the Ninoy Aquino Medal of Valor to two freedom fighters, former Vice President Teofisto Guingona and Butz Aquino of Atom.

At Naia Terminal 3, Sen. Bam Aquino led the commemorative ceremonies for his martyred uncle, whom he described as “an inspiration and an icon.”

To mark Aquino’s death anniversary, the Presidential Communications Development and Strategic Planning Office has put up a special web page that details the senator’s life and legacy, and includes essays and interviews about him.

Former senator Butz Aquino’s son Bobby shared memories about his “Papa Butz,” describing him as a “fountain of generosity.”

After his father’s company Mofire burned down in 1996, the older Aquino continued to gather his former employees annually for a big party, he recalled. The gathering had lavish food, raffle prizes and loot bags, and went on for two decades. This had worried Bobby, who knew his father’s resources were running out.

“But it seems he had faith that God would indeed provide if Papa Butz would allow himself to be a channel for his blessings,” Bobby said.

Alvarez recalled how Ninoy had hoped “to embrace our Muslim brothers,” based on the latter’s principle of “national integration.” With a report from Jovic Yee