Estrada: Roxas is ‘most qualified’ for presidency 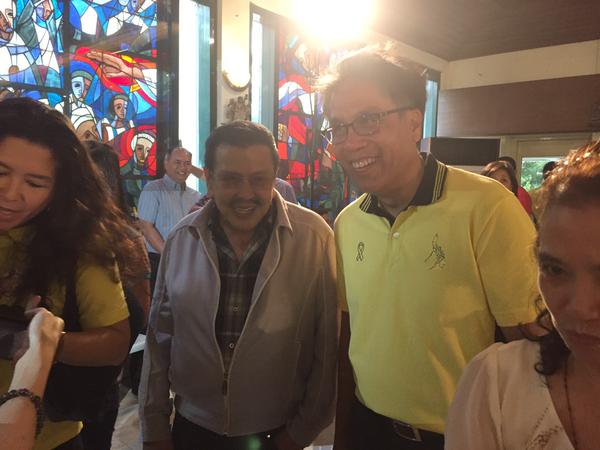 Even as former President Joseph Ejercito-Estrada hints support for Senator Grace Poe as the “next President,” the Manila Mayor said Interior Secretary Manuel “Mar” Roxas II is the “most qualified” to be the country’s leader.

Among all the possible candidates in the presidential race,  Estrada said Roxas is the “most qualified” and has enough advantage to win as president for his experience and credentials, being a House representative, a senator, and then a cabinet member.

“All of them are qualified, but because of his experience as a congressman, as a cabinet member and as a senator, (he has) the advantage,” Estrada told reporters at the memorial mass for the late Benigno “Ninoy” Aquino Jr. and brother Agapito “Butz” Aquino at La Salle Greenhills chapel in San Juan.

“From congress to a member of the cabinet, he performed very well. He’s one of the best cabinet member I had,” he said.

Estrada and Roxas were seen sharing a light moment after the mass, which was also attended by President Benigno Aquino III. Roxas said he only exchanged “greetings and well-wishes” with the mayor.

Asked about the details of their brief encounter, Estrada said: “I respect Secretary Roxas very much. I just wished him good luck.”

But this was not enough to assume that Estrada is endorsing Roxas in 2016. He said he hasn’t decided yet whom he will support in the presidential elections.

Sharing his dilemma, Estrada said: “I haven’t decided myself. All of them are very close to me. Vice President Binay is my kumpadre. Grace is my inaanak and Mar, I’m very close to him because he was a part of my cabinet before.” Julliane Love de Jesus/JE