Thailand marks blast with rites as police hunt for suspects 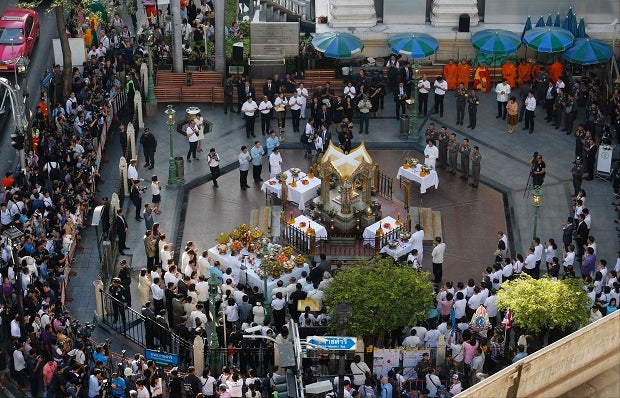 Thai officials and diplomats gather at the Erawan Shrine at Rajprasong intersection, the scene of Monday’s bombing, in Bangkok, Thailand, Friday, Aug. 21, 2015. Religious ceremonies were held to honor the victims of the deadly bombing at a Bangkok shrine four days ago. AP Photo

BANGKOK—Somber horns sounded Friday at the site of Bangkok’s deadly bomb blast as officials joined a multi-religious ceremony for victims of this week’s attack, the latest effort to show that the bustling capital was respectfully, if cautiously, moving on.

Four days after the explosion at the revered Erawan Shrine, at one of the capital’s busiest intersections, there were few solid leads into the perpetrators of the deadliest attack in Thailand’s recent history. Police were still searching for the prime suspect seen in a security video and on Thursday cleared two other men initially believed to be suspects.

In a sign of the concern over more attacks, bomb-sniffing dogs checked the shrine ahead of Friday’s morning ceremony, where government officials and diplomats laid floral bouquets. A Brahmin priest poured holy water over the damaged face of the shrine’s centerpiece, a four-headed statue of the Hindu god Brahma that is now missing one chin.

But other signs of the blast have been quickly removed: Overnight, workers soldered new iron railings to replace those twisted by Monday night’s explosion. The crater left by the blast has been paved over with fresh cement.

After the Hindu ceremony at the shrine, officials held rites for the victims in a multi-religious prayer ceremony attended by Buddhist, Christian, Hindu, Sikh and Muslim priests and representatives.

Among the 20 people killed, Thai authorities have identified six victims as Thai and four as Malaysians, along with four mainland Chinese, two people from Hong Kong including a British citizen, one Indonesian and one Singaporean. Two victims remain unidentified.

The attack has raised concerns about safety in a city that draws millions of tourists, but life has returned to normal quickly. Subways and shopping malls were bustling and aside from bag inspections at stores and hotel entrances, there was little visible extra security. Authorities say security has been tightened citywide mainly with plain clothed officers.

Authorities made confusing statements Thursday about the investigation, with a military spokesman saying they believe the attack wasn’t the work of international terrorists—a day after police issued an arrest warrant for the prime suspect that described him as a “foreign man.”

So far, the firmest clue comes from security camera footage that shows a young man in a yellow T-shirt leaving a backpack at the crowded shrine. Time stamps on the video show he left the temple about 15 minutes before the explosion.

Two other people seen on the video near the man with the backpack were initially considered suspects but cleared Thursday after one of them turned himself in and said he was a tour guide and the other was a Chinese tourist, said national police spokesman Lt. Gen. Prawut Thavornsiri.

The two men were seen in the video standing in front of the prime suspect as he removed a backpack and placed it on a bench at the crowded shrine shortly before the blast.

Police have released a sketch of the man with the backpack—depicting him as a young man with eyeglasses and bushy, black hair—and offered a 2 million baht ($56,000) reward for clues leading to his arrest. A warrant issued Wednesday describes him as a “foreign man.”

But on Thursday, a military spokesman Col. Winthai Suvaree cast doubt on an international connection.

“Security agencies have collaborated with intelligence agencies from allied countries and have come to the same preliminary conclusion that the incident is unlikely to be linked to international terrorism,” Winthai said in a televised statement. He added that Chinese tourists, who were among the victims, were not the “direct target.”

When contacted by telephone for clarification, he said that a link to global terrorism hadn’t been ruled out. “We still have to investigate in more detail,” he said.

“I didn’t say there are 10 suspects. I said theoretically they need more than 10 people,” he said.

The speculation was based on the nature of the attack, Somyot said, which must have planned it in advance, maybe a month ahead of time, and would have needed a site inspection team, bomb makers, bombers and an escape team.

No one has claimed responsibility for the blast, sparking a variety of theories into who might be behind it. One is that the blast was a revenge attack related to Thailand’s recent deportation to China of more than 100 Uighur Muslims, or that it could have been carried out by Islamist groups expanding their reach in Southeast Asia.

Other speculation points closer to home. Muslim separatists have been waging a low-level but deadly insurgency in southern Thailand since 2004, leaving more than 5,000 people dead, but virtually all their attacks have been confined to the southernmost provinces.

Though there has been little violence aimed at Thailand’s coup, whose leaders have cracked down on dissent, the “Red Shirt” movement that supported the ousted elected government clashed with the military in 2010 protests that left about 90 people dead. There could even be infighting within the army ahead of an annual military reshuffle.