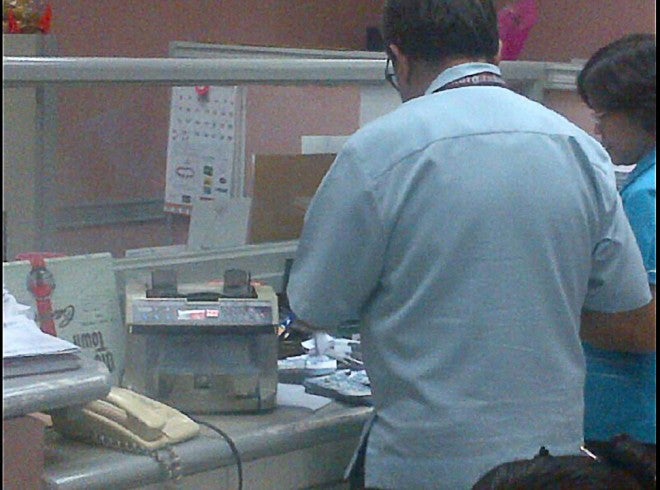 Using a counting machine, a cashier of the Sandiganbayan checks the P1.45 million cash Senator Juan Ponce Enrile produced to pay his bail for his plunder and 15 counts of graft cases stemming from the pork barrel scam. CONTRIBUTED PHOTO

SENATOR Juan Ponce Enrile’s bail for his plunder and graft case stemming from the pork barrel scam amounted to P1.45 million or 14 bundles of P100,000 each.

Enrile’s lawyers paid the bail amount on Thursday after the Sandiganbayan Third Division released the produce order for Enrile to make a personal appearance for the processing of his bail application.

The antigraft court issued the order after receiving a copy of the Supreme Court decision granting Enrile’s bail.

The decision came exactly a week after the SC sided with Enrile’s request for bill of particulars in his plunder case over his alleged involvement in the pork barrel scam.

The Supreme Court set the bail amount at P1 million. On top of the P30,000 bail for each of his 15 graft charges, Enrile then paid a total amount of P1.45 million.

Enrile went to the Supreme Court after the Sandiganbayan Third Division last year denied his motion that he be allowed to post bail.

In his 70-page petition for certiorari filed Sept. 4, 2014, Enrile said he should be allowed to post bail since the prosecution failed to present strong evidence against him and that the charges “cannot be considered a capital offense.”

At the same time, Enrile said he is not a “flight risk considering that he even voluntarily surrendered to the authorities when the warrant for his arrest was issued by the anti-graft court.

He also cited his advanced age as another reason for the SC to grant his petition.

Enrile is under hospital detention while his chief of staff Atty. Jessica Lucila “Gigi” Reyes is detained at the female dormitory of Camp Bagong Diwa as they face plunder and 15 counts of graft for their alleged involvement in the purported scheme of using the senator’s Priority Development Assistance Funds (PDAF) to ghost projects for kickbacks.

According to the financial records of principal whistleblower Benhur Luy, Enrile received P172.8 million in kickbacks from Napoles, who referred to Enrile as “Tanda” in the use of codenames for the alleged scam.

The witnesses had also testified that they personally saw Napoles hand over Enrile’s kickbacks to his alleged agent Ruby Tuason.

State witness Tuason, a socialite and social secretary of former President Joseph Estrada, has said she delivered kickbacks for Enrile from Napoles through Enrile’s chief of staff Reyes over lunch meetings in posh restaurants.

Tuason said Enrile sometimes fetched Reyes and invited them for coffee after these supposed lunch meetings.

Accused mastermind Janet Lim-Napoles is serving life sentence for the serious illegal detention of her former entrusted financial officer Luy, who turned against her when he was detained by the businesswoman over suspicions he was starting his own scam. Marc Jayson Cayabyab