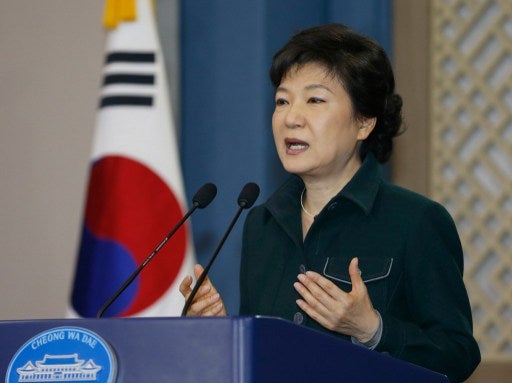 But Park’s senior secretary for foreign affairs, Ju Chul-Ki told reporters no final decision had been made on whether the president would attend the showpiece event—a huge military parade in the Chinese capital on September 3.

“Discussions are currently under way on that,” Ju said, while adding that Park was expected to hold a summit with Chinese President Xi Jinping during her three-day stay.

China has pushed hard for a decent turnout of foreign leaders, but many seem concerned at the prospect of a parade that could marry a showcase for the military prowess of an increasingly assertive China with overt anti-Japanese sentiment.

Beijing, however, insists the event has only peaceful aims.

Russian President Vladimir Putin, who staged a similar military parade in May boycotted by many Western leaders, is one of the few to have confirmed his attendance.

As a result, Park’s presence in Beijing, as the leader of a US-allied, fully democratic Asian nation, will offer the anniversary some added international credibility.

South Korea and China share a historical antipathy towards Japan, whose legacy of military aggression left both countries deeply scarred.

Ties between Seoul and Beijing have warmed considerably in recent years and Park and Xi—who have already held two full-fledged summits—are believed to enjoy a good personal rapport.

But Park faces a delicate diplomatic balancing act with Beijing and Washington.

But the South’s 60-year military alliance with the United States remains the cornerstone of its national defence, and it does not want to become a pawn in the battle between China and the US for influence in Asia.

There were some reports last week—denied by the presidential Blue House in Seoul—that Washington had sought to persuade Park against attending the celebrations in Beijing.

Read Next
Signal No. 3 raised over Batanes, Cagayan as ‘Ineng’ nears
EDITORS' PICK
97% of COVID-19 beds at PGH currently occupied
Gear up and get ready to play with Yamaha Mio Gear
Acer starts the year off strong with the Aspire Vero National Geographic Edition
Japan brings back virus restrictions over Omicron surge
Over 3 Million worth of prizes to be won at Smart Padala’s SENDali Manalo Promo!
Uproar over no vax, no ride policy: Maybe it’s time for gov’t to say sorry—Bello
MOST READ
1Sambayan names 7 aspirants in its 2022 Senate lineup
Emma Stone calls Andrew Garfield a ‘jerk’ after he ‘lied’ about his ‘Spider-Man: No Way Home’ appearance
Guevarra to Acosta: Obey rules on unvaccinated
PH to import 60,000 tons of fish to cover shortage
Don't miss out on the latest news and information.