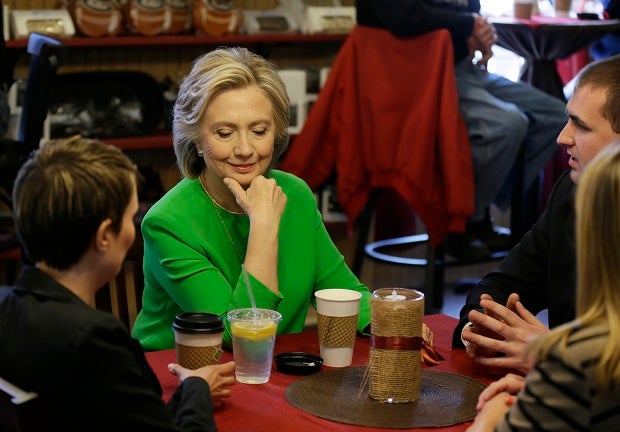 EDGARTOWN, Massachusetts — During her failed 2008 White House campaign, Hillary Rodham Clinton derided rival Barack Obama’s lofty talk of hope and change as equivalent to expecting “celestial choirs” to drop from the sky and inspire people to do the right thing.

Obama’s optimism ultimately trumped Clinton’s pragmatism. Now, as she seeks the White House again, Clinton has tried to pull a few pages from Obama’s playbook, looking to make more personal connections with voters and infusing her campaign with reminders that she could make history as the nation’s first female president. Her first TV ads focused on how her mother’s difficult upbringing inspired her to enter public service.

Yet a frank exchange between Clinton and black activists that was made public this week underscores that her core approach to politics remains unchanged. The former senator and secretary of state puts practicality over passion.

The exchange also crystallized a persistent concern that some Clinton supporters have about her candidacy. Her advice to the activists could be viewed as level-headed and reasoned, reflecting what supporters see as a solutions-oriented style that is sorely lacking in Washington. But it also highlighted that empathy isn’t her first instinct and that forging the kind of connections with voters that her campaign insists are important remains a challenge.

As the activists prodded Clinton for a more heartfelt response, she pushed them for a more coherent plan. Her comments were far less biting than when she tangled with Obama in 2008, but her message was essentially the same: Change comes from action, not rhetoric.

“She’s terrifically smart,” said Stanley Renshon, a political science professor at the City University of New York who has written about the Clintons. “But she operates always at the cognitive level. It’s always about figuring things out strategically. She’s emotionally tone deaf.”

Clinton met privately last week with the activists, who are leaders in an effort spurred by recent high-profile police shootings of black men. A video of the exchange was made public several days later, giving voters a rare glimpse of the hyper-cautious Clinton in an unscripted moment.

“You can keep the movement going, which you have started, and through it you may actually change some hearts,” Clinton told the activists. “But if that’s all that happens, we’ll be back here in 10 years having the same conversation.”

The airing of Clinton’s comments comes during a vexing summer for her campaign. She remains the clear front-runner for the Democratic nomination, with more money, endorsements and support in public polls than her rivals. But polls also show that she faces questions about her trustworthiness and continues to be dogged by her use of personal email and a private server while at the State Department.

Clinton also faces a surge of enthusiasm for Vermont Sen. Bernie Sanders, the self-proclaimed Democratic socialist who is drawing crowds around the country while appealing to Americans’ concerns about income inequality. Sanders also has been a target of Black Lives Matter activists, who have interrupted some of his rallies to demand he prioritize policies to address racism.

Clinton’s campaign has also had to compete for attention with the surprise summer surge of Donald Trump, whose bid for the Republican nomination has upended the Republican race.

As Clinton knows firsthand, an emotional connection with voters is an intangible that can help propel even the unlikeliest of candidates into the White House. Obama broke through with soaring speeches that blended aspirations for uniting the country with his own unique personal story. Clinton’s husband, former President Bill Clinton, oozed empathy with voters in settings both large and small.

Clinton has shown her own flashes of empathy and emotion, most notably when she teared up in New Hampshire days before the state’s 2008 Democratic primary, a contest she went on to win. She relishes talking about her young granddaughter.

Still, Clinton prefers building a rapport with voters over their shared views on the economy and other policy issues. She’s spent the early months of her 2016 campaign holding small group discussions on small business and education proposals, and recently held an event focused on a growing drug epidemic.