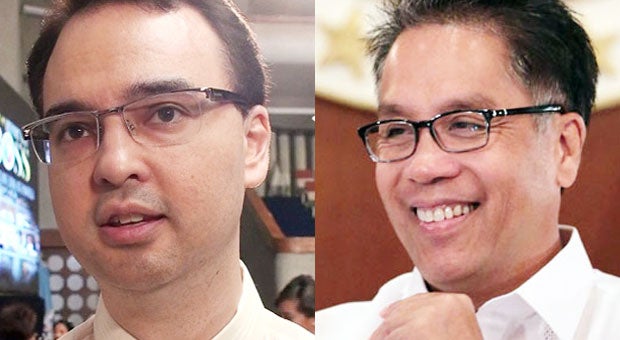 Sen. Alan Peter Cayetano (left) is the next best option after Sen. Grace Poe in the Liberal Party’s search for a running mate for Interior Secretary Mar Roxas (right) in next year’s presidential election, according to Speaker Feliciano Belmonte Jr. INQUIRER FILE PHOTOS

“Alan is a fighter… And there are too many polite guys here [in Philippine politics]. We need [someone like that],” Belmonte said in an interview with reporters.

But Belmonte, a vice chair of the ruling Liberal Party (LP), made it clear that he thought Roxas should still continue his “courtship” of Poe, the front-runner in the voter preference polls for the presidential election, to be his vice presidential running mate.

Asked for his other reasons for choosing Cayetano, Belmonte replied: “I think he is winnable,” in a text message.

“If I were in the shoes of Secretary Mar, I will continue to court [Poe]. The deadline [for the filing of certificates of candidacy] is still a long way off. Who knows?” he said.

But ultimately it would be up to Roxas, he said.

“I would like to agree with the observation that President Aquino has more or less passed the ball to Mar. From the beginning, that was my contention, once [Aquino] has made the choice, he should let his choice do the deciding,” Belmonte said.

Cayetano, a member of the Nacionalista Party (NP), said there were no talks for him to become Roxas’ running mate.

“We’re not there yet. We are still in the decision-making (process),” Cayetano said, referring to the NP selection of candidates for the 2016 elections.

“We are not closing our doors but we are not settled with it yet,” he said.

Asked whether he had spoken to Roxas, Cayetano replied in the negative, but added that there were discussions through “common friends.”

Roxas said he would not move on without a final word from Poe, who had said she had not decided whether to run and that the LP should not wait for her to make a decision.

“I’m not opening new talks until I have closed the current talks,” Roxas told reporters on Wednesday.

“This is to give respect to [Senator Poe]. This is [for the vice presidency], not for something that you can just throw away and pick up anybody who says yes,” Roxas said.

“We are sincere in inviting Senator Poe to join daang matuwid,” he said, using the slogan for the Aquino administration’s reform program.

Roxas was guest speaker at the ceremony for the turnover of the local government’s socialized housing units in Barangay (village) Culiat, Quezon City, in time for the 137th birthday of former President Manuel L. Quezon.

Belmonte also attended the ceremony and told reporters that Poe remained the LP’s top choice for a running mate for Roxas.

He said he hoped Roxas would never have to move on from Poe.

“I hope it doesn’t reach that point. I hope they are successful together,” Belmonte said.

Reacting to Poe’s comments that some Roxas supporters seemed to be stabbing her in the back, Belmonte, in his talk with reporters on Tuesday night, implied that he understood why she felt that way.

“How can you say you like her—and indeed we love her—and at the same time say she’s not qualified for the job?” he said, alluding to comments by other LP officials about Poe, including Caloocan Rep. Edgar Erice and Oriental Mindoro Rep. Reynaldo Umali.

“Umali and Erice, as far as I’m concerned, talk for themselves, not for me,” he said.

Umali warned that Poe and Sen. Francis Escudero should be stripped of their chairmanships of Senate committees should they decide to run together as a “third force” in next year’s presidential election.

“I believe it’s just fair for them (Poe and Escudero) to give up their seats on the Senate committees. They received these as part of being a member of the ruling coalition,” Umali said in a phone interview.

Umali is the brother of Oriental Mindoro Gov. Alfonso Umali, LP treasurer and a personal friend of President Aquino.

Poe and Escudero ran as independent senatorial candidates in 2013 but they were adopted as guest candidates by President Aquino on the Team PNoy coalition party.

The President has been vocal in trying to form a Roxas-Poe ticket to preserve the coalition and ensure the continuity of his reform program.

Umali said he expected a major overhaul of the Senate committees after the October deadline for the filing of certificates of candidacy.

Poe is the head of three Senate committees—public information and mass media; public order and dangerous drugs; and the joint committee on the Human Security Act.

Escudero is the head of three Senate committees—environment and natural resources, and joint committees on the Clean Water Act and Chainsaw Act.

During the Ugnayan sa Batasan forum on Tuesday, Umali was candid about his frustration at Poe’s consistent refusal to be Roxas’ running mate.

“That is her prerogative. You cannot force someone you are courting. It’s a waste because she may miss her chance if she doesn’t consider. You know, it’s different when you are an ally of a sitting President, especially one who has an endorsing power,” Umali said.

He reiterated what her colleagues had been saying about Poe, that she was not ready to run the country and that three years as a senator are too short to prepare for a gargantuan task.

Another LP official does not agree that Poe and Escudero should be punished.

“It’s the Senate majority coalition’s call but I don’t think it’s advisable. There are bills of national importance pending in the Senate that will definitely be affected by too much politicking,” said House Majority Leader Neptali Gonzales said.

Iloilo Rep. Jerry Treñas, also an LP member, said: “I think that would depend on the Senate leadership. We have to respect the Senate as a coequal body.”

Malacañang on Wednesday acknowledged that there were attempts by some quarters to “drive a wedge” between Roxas and Poe, but denied the LP was behind the smear campaign against the senator.

“It does not make sense to invite Senator Poe to be Vice President and at the same time attack her,” presidential spokesman Edwin Lacierda told reporters.

Asked if the LP would defend Poe against the attacks against her, Lacierda said the senator had “already said she is a Filipino,” referring to questions about Poe’s citizenship and residency raised to the Senate Electoral Tribunal and the Commission on Elections by Rizalito David, who lost the 2013 senatorial election.

David has said he is acting alone, but there are reports that political bigwigs are using David to harass Poe.– DJ Yap with Christine O. Avendaño, Erika Sauler, Gil C. Cabacungan and Jerry E. Esplanada

Aquino, LP members not giving up on Poe as Roxas’s VP

Alan Cayetano: I’ve been getting feelers to be VP of Poe, Roxas