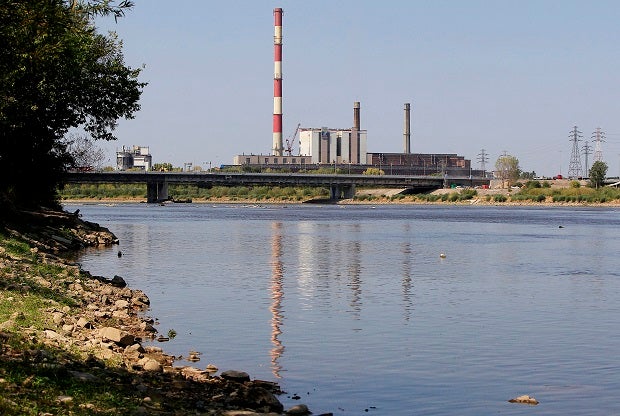 The Zeran coal power plant that supplies energy to Warsaw, Poland, is pictured Monday, Aug. 10, 2015, over the Vistula River which has a very low level of water as a result of many days of unusually high temperatures that reached 38 degrees Celsius (100F) at some places over the weekend. AP

WARSAW, Poland—Poland’s longest river, the Vistula, on Tuesday hit its lowest water level in more than 200 years because of a drought ravaging the country, a weather official said.

Its level in Warsaw fell to 50 centimeters (20 inches), the lowest since records began in 1789, according to Grzegorz Walijewski, a hydrologist at Poland’s IMGW weather institute.

He added that the water level, which usually averages 237 cm in the capital but reached a high of 787 cm in 1960, would continue to drop in the coming days.

The Vistula, which is the EU member’s longest river at more than 1,000 kilometers (600 miles), splits the country in half and deposits in the Baltic Sea.

Warsaw officials have taken advantage of the drought, which has hit the farm sector hard, to hold an archeological dig on the Vistula that is turning up new objects every day.