Officials: US military likely to open combat jobs to women 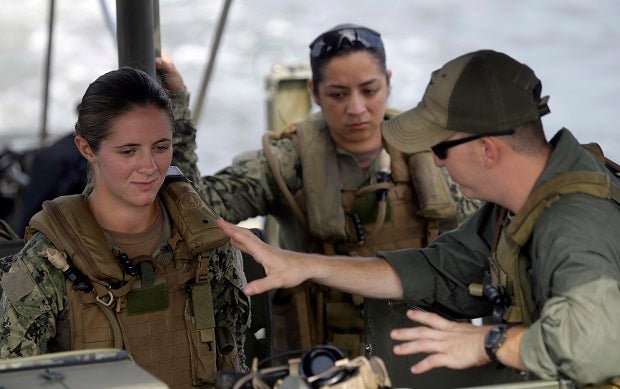 WASHINGTON—Two women have now passed the US Army’s grueling Ranger test, and even tougher and more dangerous jobs could lie ahead. The military services are poised to allow women to serve in most front-line combat jobs, including special operations forces, senior officials told The Associated Press.

Based on early talks, officials say the Army, Navy and Air Force likely will not seek exceptions that close any jobs to women. Marine Corps leaders, they say, have expressed concerns about allowing women to serve in infantry jobs and yet may seek an exception.

The services are wrapping up reviews and must make their recommendations to Defense Secretary Ash Carter this fall. The officials spoke on condition of anonymity because they were not authorized to discuss the internal debate.

Even if Marine leaders object, they are likely to meet resistance from senior Navy and Defense Department officials who want the military to be united on this issue.

Undercutting the Marines’ reservations is that Special Operations Command is likely to allow women to compete for the most demanding military commando jobs—including the Navy SEALs and the Army’s Delta Force—though with the knowledge that it may be years before women even try to enter those fields.

Women have been steadily moving into previously all-male jobs across the military, including as members of the Army’s 160th Special Operations Aviation Regiment, best known as the helicopter crews that flew Navy SEALs into Osama bin Laden’s compound. Women are also now serving on Navy submarines and in Army artillery units.

Friday will mark another milestone as the two women graduate at Fort Benning, Georgia, from the Ranger school, a physically and mentally demanding two-month combat leadership course. Completing the course lets the two women wear the coveted Ranger black-and-gold tab, but it does not let them become members of the Ranger regiment. Neither woman has been publicly identified by the military.

Longer term, the uncertainty of the Marine decision underscores the wrenching debates going on within the military over the changing role of women, and it reflects the individual identities of the services and how they view their warrior ethos.

Only a handful of jobs in the Navy and Air Force are currently closed to women.

Last year the Navy considered seeking an exception that would have prohibited women from serving on older guided missile frigates, mine-countermeasure ships and patrol coast craft. Some argued that those ships, which are due to be phased out in coming years, would need millions of dollars in construction to add facilities for women and it wasn’t worth the expense.

But Navy Secretary Ray Mabus withdrew that plan in a memo late last month that was obtained by the AP. Officials said Navy leaders concluded that since women can serve in all the same jobs on other ships no real exclusion existed.

The Army and Marine Corps, however, have thousands of infantry, artillery and armor jobs that are currently closed to women. There has been a lot of study and debate over whether to open those positions, because they often involve fighting in small units on the front lines, doing physically punishing tasks.

The Marine Corps set up a task force this year to set gender-neutral job standards and determine whether incorporating women into small squads affected unit cohesion or combat readiness. Companies made up of all men and mixes of men and women spent up to three months in California performing a broad range of unit tasks and going through detailed scientific evaluations to see how they did. Senior leaders are reviewing those results.

Army leaders did similar scientific analysis, reviewing all tasks needed to do the combat jobs and have been creating gender-neutral standards that troops will have to meet in order to qualify. Meanwhile, however, the Army began to slowly open some combat positions, including artillery jobs, to women.

US military to let women try out for Navy SEALs—report

Read Next
Signal No. 1 raised over Batanes, Cagayan as ‘Ineng’ nears
EDITORS' PICK
Heads may roll at BOC, says Palace if sugar smugglers are allowed to use recycled import permits
Palace: Biggest supermarkets in PH commit to sell sugar at P70 per kilo
What to watch out for when selecting a video surveillance solution
House energy committee chair Arroyo bats for cheap electricity
vivo brings to the Philippines a powerful smartphone with a slimmer body, the vivo Y02s for only PHP 6,499
DOH reports increase in daily COVID-19 deaths, mostly unvaxxed
MOST READ
Metro Manila’s No. 1 wanted man arrested, says NCRPO
Alyssa Valdez to miss Creamline’s AVC Cup campaign
Brian Poe-Llamanzares receives his PhD in Public Administration
Jordan Clarkson arrives in Manila to bolster Gilas Pilipinas
Don't miss out on the latest news and information.