Sen. Juan Ponce Enrile’s return to the Senate as a likely leader of the opposition after more than a year under detention on plunder charges could very well be a potential “game changer” in the so-called last two minutes of the Aquino administration.

Granted bail by the Supreme Court on Tuesday, a mountain of work awaits the 91-year-old senator, not the least of which is his input during the upcoming plenary on the draft charter of a Bangsamoro substate, envisioned by Malacañang as President Aquino’s legacy of lasting peace in strife-torn Mindanao.

Senators are excited to see Enrile back, after his surrender to the Philippine National Police on July 4, 2014, on a charge that he pocketed P172 million in kickbacks from the alleged diversion to ghost projects and fake agencies of his allocation from a congressional pork fund meant to alleviate the rural poor.

For Senate President Franklin Drilon, it was as though Enrile was always there in the chamber although physically absent.

“He has never abandoned his work, anyway. He continued to perform the functions of a senator except attending the sessions,” Drilon told reporters.

Sen. Antonio Trillanes IV, who had tussled with Enrile on the Senate floor, said he respected the court ruling.

“Let’s just say it’s a game changer as far as some internal dynamics or even external dynamics of the political environment are concerned. We’ll see how it goes. It can work for the opposition, it can work against the administration, so we’ll see,” he told reporters.

In an 8-4 vote, the Supreme Court on Tuesday allowed Enrile to post bail while on trial for his alleged role in the diversion of his Priority Development Assistance Fund (PDAF) allocation to bogus nongovernment organizations (NGOs) in a scheme attributed to businesswoman Janet Lim-Napoles.

In a one-paragraph media brief issued following a Supreme Court en banc session, spokesman Theodore Te said: “The court granted the petition for bail of petitioner Juan Ponce Enrile, subject to the terms and conditions to be specified by the court in its order, which will be forthcoming.”

Te did not elaborate. But inside court sources said the high tribunal granted the elderly senator temporary liberty for humanitarian reasons, setting bail at P1 million.

Associate Justice Francis Jardeleza inhibited himself from voting due to his previous participation in the case as Solicitor General.

Enrile, who has been under hospital arrest at the Philippine National Police General Hospital in Camp Crame since July last year, had asked the high court in September last year to reverse Sandiganbayan resolutions denying him temporary freedom while on trial.

The senator, along with his former chief of staff Gigi Reyes, was alleged to have received nearly P172 million in kickbacks in the PDAF scam, allegedly the brainchild of Napoles, also currently detained. They have denied wrongdoing.

Enrile and Senators Bong Revilla and Jinggoy Estrada are the highest elected officials tagged in the scam, in which several members of the House of Representatives had also been implicated.

Revilla and Estrada remain detained and continue to fight for their temporary liberty.

In his petition for certiorari, Enrile’s lawyer said bail was a matter of right as the prosecution had failed “to show clearly and conclusively that Enrile, if ever he would be convicted, is punishable by reclusion perpetua.”

The senator’s camp also said Enrile was not a flight risk owing to his age and state of health.

Last week, the high court also granted Enrile’s plea for the Office of the Ombudsman to file a bill of particulars detailing its charges against him. He had petitioned the Supreme Court for such a document to promptly prepare his defense, saying allegations against him were vague.

Among the details that Enrile wanted to be clarified were: Who among the accused—Enrile or Reyes—acquired the alleged ill-gotten wealth; what acts were committed in a series, as to the alleged receipt of PDAF kickbacks from Napoles; who delivered the alleged payoffs on what time, date and place; and how did the senator allegedly take advantage of his position as an elected senator.

Without the court resolution at the end of office hours Tuesday, the Sandiganbayan said it would open Wednesday—a holiday in Quezon City—to give Enrile a chance to post bail in case the high tribunal transmitted a copy of its decision to the antigraft court. 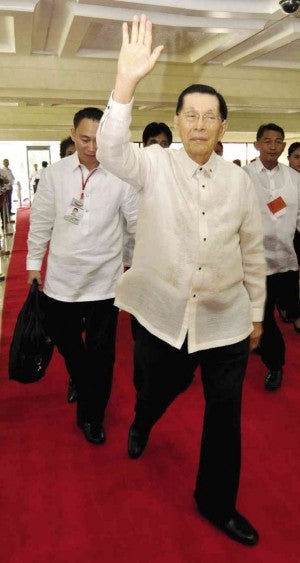 Chief Supt. Victor Deona, director of the PNP Criminal Investigation and Detection Group, said Enrile would be freed once his office receives a copy of his release order. Although Enrile is staying at the PNP hospital, he is technically under CIDG custody.

Interpellation on the proposed BBL is to begin next week. Timetable for the approval of the draft Bangsamoro charter had been set back by the massacre of 44 police commandos on Jan. 25 in the MILF-controlled Mamasapano cornfields in Maguindanao province.

“With our agenda full, hard labor awaits him here. With his experience, he can certainly enrich the discussions on the budget and the BBL,” said Sen. Ralph Recto.

“I’m sure, knowing him and from what my colleagues have said, he was still studying and reading a lot while in detention. So I wouldn’t be surprised if he’d be back very soon here in the Senate and buckle down to work because he’s the type of person to do that,” Angara said.

Sen. Nancy Binay, also with the minority, said, “I look forward to working with him in the minority as our most senior member, particularly in scrutinizing the 2016 budget and fiscalizing the administration.”

Sen. Francis Escudero said the court’s move was a “seminal and precedent-setting decision on the right to bail given the unique theory” that he used. “Many other accused can benefit from this decision,” Escudero added.

“That’s good. He’s a real asset,” he told reporters. “I’m not aware of [how the court ruled], but I’d like to admit I myself visited him three times, while he was in hospital at Camp Crame, and spent at least two hours each time and discussed issues with him,” Belmonte said.

Deputy Speaker Giorgidi Aggabao said that the grant of bail to Enrile and the approval of his petition for a bill of particulars meant the cases against him were “flawed.”

“I would think bail is perfectly reasonable in the circumstance,” said Aggabao, the president of the Nationalist People’s Coalition. “After all, bail is a matter of right and may only be denied to an accused on very exceptional grounds.”

Deputy Majority Leader Sherwin Tugna said: “I believe that the Supreme Court placed a premium on the constitutional right of each and every person to be presumed innocent until proven guilty. The right to bail (the right to be free and out of jail) always goes hand in hand with the constitutional presumption of innocence of an accused, until proven guilty beyond reasonable doubt in a fair and full trial.”–Leila B. Salaverria and Tarra Quismundo with DJ Yap, Dona Z. Pazzibugan and Julie M. Aurelio

After a year in hospital arrest, Enrile willing to wait to post bail

Read Next
ICC to be ready for APEC meetings by September – organizers
EDITORS' PICK
DOH: Booster doses for fully vaxxed adults to start December 3
Legarda: Ending Violence Against Women, a cause for all
Smart offers wireless fiber-like speeds to Filipino homes with country’s first 5G Prepaid Home WiFi
NGCP transmission tower in Lanao del Sur bombed
Omicron: What science knows so far about latest Greek-lettered COVID variant
This new condo in the South will make you want to turn a new leaf
MOST READ
‘Maski na hindi ‘yung mga bright’: Duterte urges public to elect new leaders
Sereno warns: Those accusing Kris Aquino of ‘stealing’ Marcos jewels will face criminal case
Roque defends Bongbong Marcos: ‘He was only 15 years old in 1972’
Pacquiao to voters: If you can’t vote for me, then don’t vote for a corrupt candidate
Don't miss out on the latest news and information.