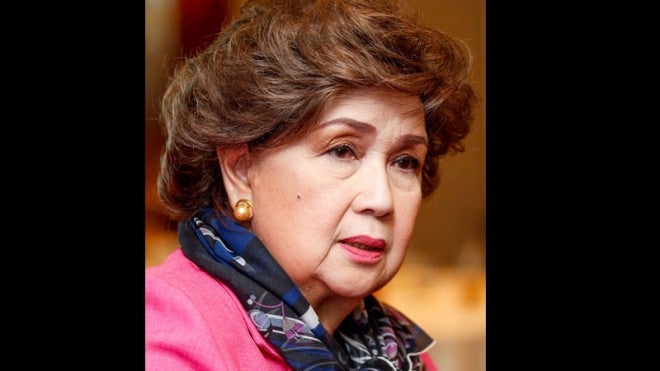 Actress Susan Roces on Tuesday attacked those claiming that her daughter, Sen. Grace Poe, could not be presumed a natural-born Filipino as she was a foundling, spewing colorful and emotional Filipino terms against the senator’s detractors.

“How dare they! Wala silang karapatang duru-duruin ang anak ko at sabihing hindi (Filipino) citizen ang anak ko (They don’t have the right to bully my daughter by saying she is not a Filipino citizen),” the widow of Filipino movie icon Fernando Poe Jr. told reporters in an ambush interview.

Under the Constitution, one can run for President only if he or she is a natural-born Filipino.

“Grace is our daughter! Nakakabit pa ang pusod niya nang siya’y matagpuan sa simbahan sa Jaro (Iloilo)… ’Di ko alam kung anong pamantayan nila… Anong karapatan nilang ipawalang-bisa ‘yung pinaglaban namin sa korte para magkaroon siya ng birth certificate. (She still had her umbilical cord when she was found in a church in Jaro, Iloilo. I don’t know what their standards are. What’s their right to dismiss what we fought for in court so she could have a birth certificate),” Roces said.

Roces was responding to queries prompted by defeated 2013 senatorial candidate Rizalito David’s move accusing Poe in the Commission on Elections (Comelec) of “material misrepresentation” when she filed her candidacy for senator that year. Poe was the topnotcher in that election.

David, who ran under the Catholic-oriented Ang Kapatiran party, said since Poe was a foundling, she could not be presumed to have parents who are Filipino citizens.

David said Poe became an American citizen in 2001 and reacquired her Filipino citizenship only in 2006. He argued that since Poe was not a natural-born Filipino, her reacquisition of citizenship was considered null and void.

There are insinuations, however, that political bigwigs are using David as a proxy to harass Poe.

A few months ago, the camp of Vice President Jejomar Binay, the first to declare his intention to run for President, accused Poe of not being a natural-born Filipino as she was a foundling.

Roces turned the tables on her daughter’s opponents, challenging them to bring it on and start by looking for Grace’s biological parents.

“Ngayon may pagkakataon, halungkatin na nila ang gusto nila (Now there’s an opportunity for them to look for what they want to find). I will appreciate it kung sino mang tao ang maka-match ng DNA ng anak ko. Aba, eh, magpapasalamat ako sa kanya, matagal na naming hinahanap (If anyone can find a match to my daughter’s DNA, I will thank him as we have been looking for [her biological parents] for a long time),” she said.

The veteran actress and widow also compared her situation to a common “askal,” or mixed breed dog, whose instinct tells her to attack even humans based on mere perception of danger to her puppies.

“Kahit askal lalaban nang patayan. Huwag mong mahipo-hipo ang tuta ng bagong inahing aso. Kahit hayop nasasaktan kapag ginagawan ng ’di maganda. Sasakmalin ka n’yan (Even an askal will fight to death. Don’t dare stroke a new-born puppy. Even an animal is hurt if something bad is done to it. It will bite you),” she said.

Roces made these statements after the formal launch of the new logo of Champion detergent, a laundry product she has endorsed since 2006, at a hotel in Pasig City. Peerless Lion Corp., the manufacturer of Champion, sponsored the event.

A mix of entertainment and lifestyle journalists besieged Roces with questions about Poe after the launch.

Roces noted that while she was hurt by similar accusations of non-Filipino citizenship against her late husband when he ran for President in 2004, she considered those hurled against her daughter much worse.

This is because aside from calling attention to her being a foundling, Poe’s detractors have also spread

allegations about her supposed excessive drinking and that she is

unkind to the house help.

“Personal, eh. Kasi tungkol sa pagkatao. Wala silang karapatan para magsalita ng ganun… (This is getting personal. They don’t have the right to speak like that,)” the mother said.

Turning to humor, Roces said her daughter’s critics had probably “watched too many movies” produced by her husband. Plots of movies in which the late actor, fondly called FPJ, had starred in usually had scenes where rich but cruel people mistreat the poor.

At one point, the fiercely maternal Roces’ soft side showed.

She told reporters she really had prayed that God would give her a child, adding that she once told the senator she was thankful that Grace’s biological parents had left her in front of a church instead of throwing her in the trash.

Apparently addressing her daughter, Roces said: “Pinanalangin ko na magkaroon ako ng anak. Salamat at nagtagpo-tagpo tayo ng landas (I had prayed for a child. Thank you for our paths have crossed.”

The actress, who has no biological child, said she had always wanted a baby with “twinkling eyes and curly hair” like Grace had when she was found.

“Ngayon may darating na lang at sisirain ang lahat ng iyan? (Now somebody steps in and wants to destroy all this?)” Roces asked.

Still, the senator’s mother thanked her daughter’s supporters “because of your belief that she will make a difference.”

Roces said she continued to pray that Poe would “make the right choices” but did not mention the offer of Roxas for the senator to become his running mate in 2016 under the Liberal Party banner.

Poe, a junior senator who leads in presidential preference surveys, is being wooed by Interior Secretary Mar Roxas, standard-bearer of the ruling Liberal Party (LP), to be his running mate in the May elections.

She has yet to declare whether she will run for higher office.

Roces said the fact that a Philippine court had issued a birth certificate bearing her and her late husband’s names as parents should be enough proof that even the judiciary was convinced of Grace’s citizenship.–Cathy Yamsuan, Inquirer Lifestyle

Susan Roces on Grace Poe presidential bid: It’s up to her